Millen has been handed an 18-month deal as is given the job of leading Carlisle away from relegation trouble in League Two. 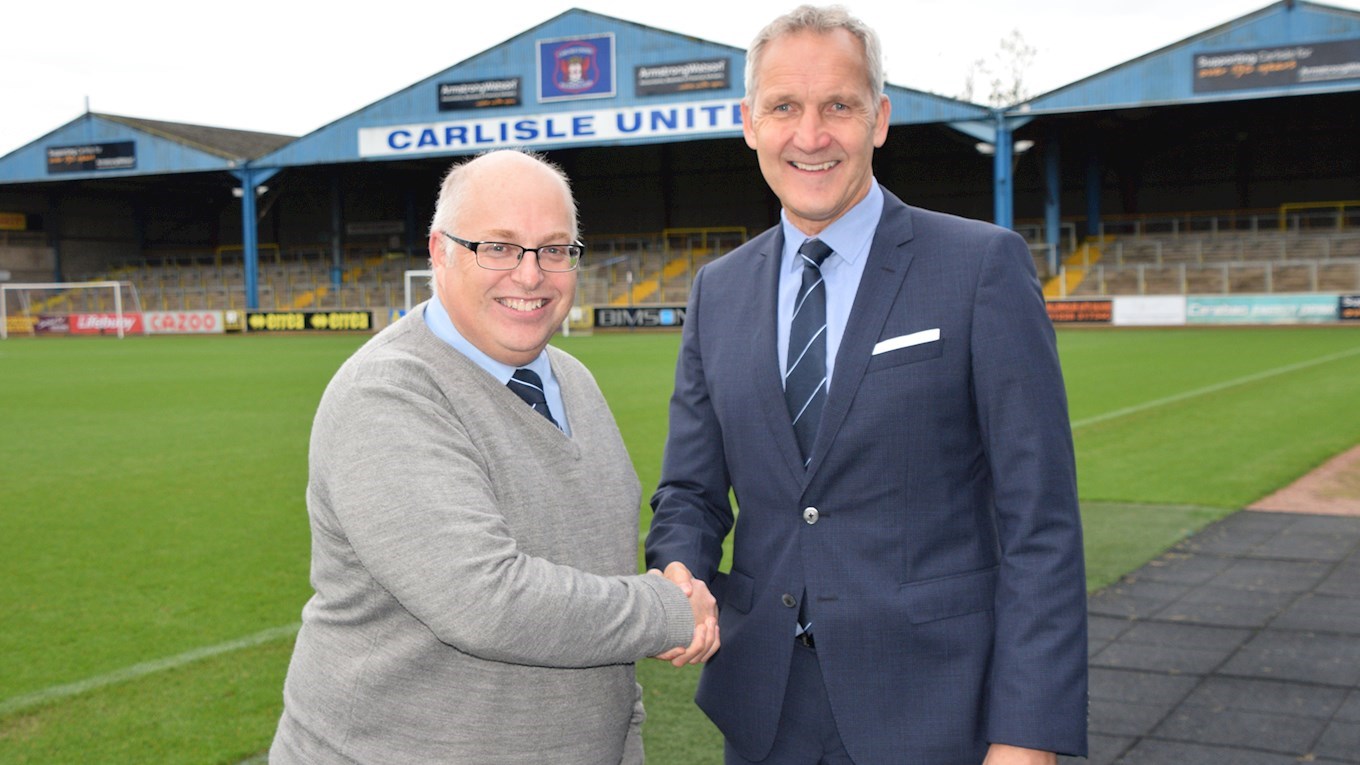 Carlisle United are delighted to announce that Keith Millen has today been appointed as first-team manager on an 18-month deal.

As a player, Croydon-born Millen, 55, cut his teeth in the game as a youngster with Brentford and Palace, and went on to serve the Bees for almost 11 seasons, scoring 20 goals in close to 400 appearances.

He moved to Watford at the beginning of 1994 and stayed at Vicarage Road for just over five years, earning status as a favourite when he helped to steady the ship and avoid relegation during his first season with the Hornets.

Two successful promotion campaigns and an eye-catching brand of football further cemented his status with the fans as he became an ever-present at the heart of the back line. He ended his playing career at Ashton Gate, with 75 games in four seasons with Bristol City, and he then made the smooth transition into the coaching set-up with the club.

Two spells as caretaker manager followed, and he was made permanent manager following the unexpected departure of Steve Coppell in October 2010.

He held that post for a year, before moving on to work under Neil Warnock and Alan Pardew at Crystal Palace, via interim coaching appointments at Spurs and Portsmouth. He had three separate spells as caretaker with Palace.

Another caretaker period came during his stay with MK Dons, when Dan Micciche left by mutual consent in April 2018, and his most recent coaching appointments were in Sweden, where he worked with Halmstad.

His efforts there caught the attention of Gothenburg-based Örgryte, who offered him the role as manager.

Chairman Andrew Jenkins said: “Keith impressed us all when we met him and we’re really pleased that we’ve been able to bring him to the club.

“He has a vast amount of experience. He’s worked with some excellent clubs and managers in playing, coaching and management capacities, and we feel he has the approach that our players will respond to.

“We all know that he joins us at what is a challenging time, in terms of results and league position, but he’s ready to meet that head on. We are looking forward to supporting him as he joins us as our manager.

“On behalf of the club and the board of directors I would like to go on record with my thanks to Gavin Skelton, Eric Kinder, Mark Birch and the rest of the football staff for the work they have done over the past few weeks.”

Director of football David Holdsworth said: “Keith has got a wealth of knowledge and a lot of contacts in the game. He knows the position we’re in and we’re delighted to have him at the club ready to help us climb the league.

“He’s a very good coach which is why we’ve appointed him as our manager. He will manage the players professionally and I’m sure they’ll get a lift when they get on the training ground with him.

“All of the final candidates had done their homework on our players and watched a vast amount of our games, as Keith has. He knows the game and he knows what this division is about.

“I played with Keith at Watford and I know the type of character he is. I haven’t seen him for 20-odd years, but football is a small world at times.

“He’s worked with the likes of Roy Hodgson and Neil Warnock, who are amazing people to learn from. He’s well respected within the top levels of the game having managed at Bristol City and been caretaker at Crystal Palace. You don’t get those jobs without being a good coach.

“The last two weeks have been a tough time for this club and our supporters. We hope we can now look forward and start to climb the league quickly.”

Chief executive Nigel Clibbens said: “We’re delighted to have appointed someone of the calibre that Keith has.

“He has a modern and forward-thinking approach and we believe he will be able to get the best out of the group of players. His style and way of working will be suited to the players we have in our dressing room, and to how we want to go forward as a club.

“In our discussions with him over the course of the interview process he showed that he already has a clear understanding of our players, the team and the division, and of the issues that we face. From that he had a very clear idea of what is required to help us to improve and move forward.”

United’s current coaching and backroom staff will remain in place to assist and support Keith in his role.

@ticketaddict: Welcome and good luck Keith. Looks a decent appointment on the face of it and certainly a lot better than some of the alternatives. Plenty of contacts in the game and clearly a very experienced and well thought of coach.

@Markleshark: Least we might have more of a chance of getting on the tele in the Vanarama. 👌🏼

@AndyRob__: That’s even more disappointing than I expected. Very uninspiring

@JamieNewton77: Holdsworth mate from Watford then…

@NHolmesCatax: Welcome Keith, got to admit I am underwhelmed but proof of the pudding will be results on the pitch. After all I had never heard of Mick Wadsworth and look how great he was

@leej1976: Had a tooth out earlier today and thought the day couldn’t get worse… then this. 🤷‍♂️

@Matthewgaskell9: A mate of holdsworth and he’s not even trying to hide it, let’s hope this one work out 🙄

@Tommy20316: Good luck Keith, all of us Palace fans are behind you, we they have got themselves a top guy and manager 👍

@GrandeCPFC: Good luck Keith. What a man, gonna do a great job I’m sure

@Luke_Graham_: Awful decision, killing the club, can’t wait for another awful 18 months till he is inevitably sacked

@ukdave1973: Typical appointment from the old boys brigade but good luck to him anyway.

@Tomw0892: Welcome to the club Keith 🔵⚪ Anyone writing g him off already needs to give their head a wobble. Certainly not everyone first choice but there’s alot worse out there. Let give the man a chance!! Need to start wi: What a ridiculous football club. Extensive weeks long search to appoint the DoF’s former centre-back partner, a man who has not held a permanent managerial position in the UK for 10 years.

@tashkentterror: “The last two weeks have been a tough time for this club and our supporters.” Says David Holdsworth. Yeah, that’s right David, I mean everything has been absolutely fantastic for donkeys years until the last fortnight.

@kspr52: Clubs an absolute disgrace. Jobs for DH mates. Might as well get to the point where we appoint Dean Holdsworth #cufc

@cufcdanny: What a fucking shocking appointment this is for the club. Crowds will get even lower than they are now! DH’s good friend, a Yes man! If this doesn’t work then DH has a lot of explaining to do! I really fear for the rest of the season now. I just hope & pray he keeps us up #cufc

@Matthewgaskell9: They say in the article that he’s an ‘experienced coach’ that’s exactly what we didn’t need. We needed someone who’s an experienced manager who’s been there and done it but no the cheap option always wins

@nathan_ridley_: Not the most inspiring choice but given the remaining candidates at this stage, I’m pretty content. Bring on the new era! #CUFC

@chethegeezer: Lovely fella. Well-liked at Palace. All the best Keith!

@buntinio1990: Underwhelming to say the least. Good luck Keith, your gonna need it working for the “custodians”

@RonanMacca99: 15 minutes in and the meltdown has occurred

@HYFPRW: On the positives, no doubt Millen’s coaching pedigree is a step up from anyone the club have had in a long time. On the other hand, people tend to be assistants for two decades never really getting a chance as a number one for a reason…

@ronan_45: Absolute circus of a football club. Holdsworth the imposter just searched for a new gaffer for over 2 weeks and given the job to one of his mates 🤣

@JoeStephenson96:Absolute dross, get out of my club

@AdWhitfield94: Had the chance to get someone in the fans could get behind. But no… kept the same coaching staff (part of the problem) and appointed DH the 🤡’s pal. Wish him well but the club can get to fuck. Taking the piss out of us fans.