A video is currently going viral appearing to show a police van rushing to the Piccadilly Tavern, stopping where a group of lads gathered outside the building.

The supporters could be then seen quickly walking away from the area as soon as the vehicle stops, with claims emerging that attempts had been made to smash the windows.

It’s not even 10am yet, and Leeds are kicking off in Manchester. Football is well and truly back! #LUFC #MOT #ALAW pic.twitter.com/Aev6JPEBCq

As many as 200 officers are set to be on duty as part of a massive security operation at the high-risk Category C game which kicks off at lunchtime.

The fixture has a history of crowd trouble, and Leeds are bringing as many as 3,000 supporters for the first league meeting between the two clubs with fans at Old Trafford since 2004.

The two sides last met in the Premier League back in December following the Yorkshire club’s return to the top-flight, but it was the Red Devils that came away with 6-2 win, played behind closed doors due to Covid restrictions.

Ahead of the return fixture at Elland Road in April, Ole Gunnar Solskjaer’s side put extra security precautions in place after learning that Leeds supporters were planning to attack their team bus at the height of the European Super League fallout.

Chief superintendent Stuart Ellison, Greater Manchester Police’s gold commander for public order operations, calls for good behaviour at events across the city with Old Trafford set to be full for the first time since the Manchester derby in March 2020.

He said: ‘It feels like a long time since we last had capacity crowds, but we have worked on hundreds of events in the past and our priority this weekend remains the same.

‘The Premier League starts with Manchester hosting the biggest game of the weekend, 70,000 fans returning to Old Trafford to see Manchester United hosting Leeds United. That’s just one of four matches on our patch on Saturday afternoon.

‘Our officers are working extended hours this weekend to help keep the public safe. All that we ask is that you behave responsibly so everyone can enjoy themselves.’ 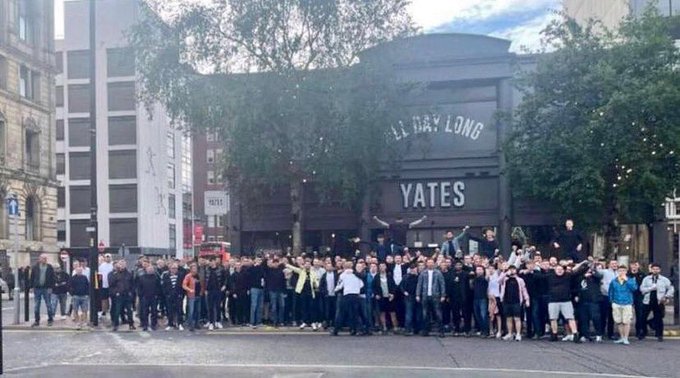 A GMP statement added: ‘Since the release of the fixture list we have been working with Manchester United, the supporters’ groups of both clubs, local authorities, and other relevant partners to ensure all supporters in attendance are able to enjoy the game in a safe environment.

‘There can be challenges around this fixture that present it as high-risk which is why we work closely with these agencies to put together a thorough policing plan that ensures all spectators can enjoy the match without any issue or disruption for the wider public.’

Meanwhile, Manchester United are urging fans to arrive early for the Premier League fixture due to a number of transport issues.

There will also be a minute’s silence before kick-off as both clubs pay respect to former players, staff and fans who have lost their lives during the pandemic.

Man Utd boss Ole Gunnar Solskjaer played down any concerns over Old Trafford being at full capacity again after the Covid outbreak.

‘No, I don’t have any safety or security worries. I know the club have got the safety measures and everything will be sorted.’

@BlueCivis: Have the cockneys turned up yet

@traffordturner: Kicking off with the spice heads in Piccadilly

@GlenH84: Imagine being locked up and missing the game. Won’t be there fault though

@Jake_Jnsn: Absolute state of them. Grow the fuck up.

@ameliapza: The café nero furniture flying around has finished me off

@lukeshepherdson: I was hoping the EURO final was a one off. I hope we don’t have a serious problem again in this country.

@JonnyMc1: Scenes we love to see. That aside I’ll just stick to e-battles from the safety of my own home.

@callumswan_4: This country continues to depress me. Jumped up cunts

@SexyDabexy: Nice to see the bin as a weapon has made the jump for 2001 WWF hardcore matches to football hooliganism.

@MikeConsalvey: It’s this sort of shite that puts me off supporting league football, idiotic fans!

@GeeCeeWBA: Really enjoyed the fella just trying to enjoy his pre match cappuccino on the Costa at the start here

@Joshua__Cadman: Absolutely cunts all of them

@dadwithahat1: Look at those two officers going into protect the thugs being hit by other thugs. If I had my way I’d cancel all football games the moment violence breaks out and count as a loss to both teams.

@PeteWatkins67: This sums up everything that’s wrong with football nowadays. Football fans in fucking Starbucks and not the pub before the match #gamesgone

@mcfcbabs: Will lose a bit of respect if any Leeds are drinking in Picc Tavern

@ConorMcGrace: Cant find a boozer that will let them in. That’s all.

@cozzzz_: The beautiful game is back 🙌🏼

Burn it. Burn it with fire

@Francis_Dom: Football is back and so are the cretins.

@lfcynwa1968: The couple casually finishing the cake and coffee 🤣🤣

@MCFCTrey: Spare a thought for United fans. They travelled all the way from london to get battered with a guy with a bin

@Bhoy1888Celtic1: 2021 and you still have football fans who call themselves “casuals” meeting up to fight before and after a game. Sad bastards

@BigRick9559: Honestly don’t understand fans that go to a game and cause trouble. Rivals or not just enjoy the game and day ffs

@lukeCFC25: And just to think these idiots have been locked up with this anger for the past 17 months. What a bunch of idiots. #MUNLEE

@ash_mccutcheon: What is the fucking point? Just enjoy the game of football. Why do fans have to let the sport down

@LMAD_87: Fucking hell, imagine waiting all season to then just twat about in town. Folk who do this aren’t football fans. They aren’t “fighting” for their club. Just abit embarrassing really

@TheBadManTips: Premier League hasn’t even been back 24 hours and we’ve got a royal rumble on the streets of Manchester

@aiden_brannigan: Why am I not one bit surprised!!

@SRPblog: FFS! Grow up & stop acting like complete arseholes will you? Or else they’ll ban fans and you’ll ruin it for those who can actually behave like a normal person. This Is disgraceful!

@ad3sola: These bastards woke me up this morning. It’s been chaos all day in Manchester

@DaveWallis15: 1 copper turns up and they all leg it, haha

@StokeyyG2: that couple are just trying to enjoy their coffee

@nathan__symons: Imagine having to explain to the misses why you were being smashed about with a wheelie bin at 11 o clock in the morning

@marcflush1: The state on them

@HtfcJosh16: Fucking Morons. Guarantee this is all they’ll have been looking forward to never mind the game. Idiots

@GedMcbeath: I’ve not even had my breakfast and this is going off

@herbsmph: Fella with the bin hahahaha

@rushfc57: Our fans getting a pasting

@Craigbrown150: what is wrong with people

@foyss07: Bellends man just go watch the game with your boys and relax. This false sense of gang fights in British football does my head in. You’re all pussies just hyping up cos you’re with your boys.

🤣 “We all hate Leeds scum!”
Missed us #MUFC fans? pic.twitter.com/WpeEgpSMBm