Much loved comedian and Chelsea fan Sean Lock dies aged 58 it has sadly been confirmed on Wednesday morning, shocking the nation.

A statement from his agent Off The Kerb Productions to the PA news agency said confirmed the news he died following a battle with cancer, saying he was surrounded by his family. 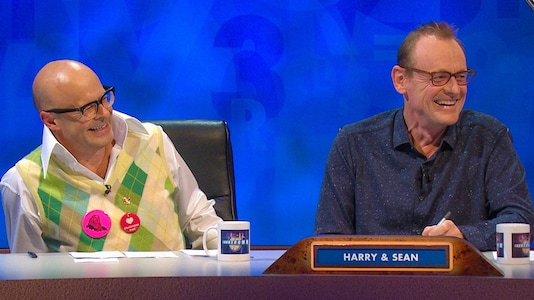 It read: ‘It is with great sadness that we have to announce the death of Sean Lock.

‘He died at home from cancer, surrounded by his family.

‘Sean was one of Britain’s finest comedians, his boundless creativity, lightning wit and the absurdist brilliance of his work, marked him out as a unique voice in British comedy.

‘Sean was also a cherished husband and father to three children.

‘Sean will be sorely missed by all that knew him. We kindly request that the privacy of his family and children is respected at this difficult time.’

Tributes flooded in, with comedian Lee Mack, a close friend, saying: ‘I’ve known this day was coming for some time, but it’s no less heart-breaking.

‘A true original both in comedy and life. I will miss him so much.’

Countdown’s Susie Dent said: “I wish I had the words to describe the exceptional man that was Sean Lock. But today I don’t, and I think he might have liked it that way.”

Fellow comedian Ross Noble tweeted: “With the passing of Sean Lock we have lost the best of the best. He made me laugh like few others do.A massive talent who made stand up look effortless and approached his illness in the same no nonsense way he approached life. A great loss.”

Jon Richardson posted: “I idolised Sean as a comic long before I became a comedian myself and ten years working alongside him didn’t diminish that in the least. An incredible comic brain and a truly unique voice. I’m devastated for his family today and sad for comedy that we have lost one of the very best. Undisputed, undefeated, carrot in a box champion. I will miss him.”

Richard K Henning wrote: “I saw Sean Lock & Bill Bailey do Rock at the pleasance in about 94, where I think Stewart Lee and me (and maybe 2 others) were the entire audience. Crazy to think that was possible! One of my favourite Fringe memories. RIP Sean. Like everyone in comedy, I’m gutted by this news.”

Richard Osman paid tribute: “Over 15 years producing ‘8 Out Of 10 Cats’ Sean Lock made me laugh so much and so often. A unique and brilliant comic voice. Love to his family and his many friends #RIPSean”

Sean Lock started his comedy career as a stand-up comedian, won the British Comedy Award in 2000 in the category of Best Live Comic, and was nominated for the Perrier Comedy Award.

He was best known for his role as a team captain on Channel 4 comedy panel show 8 Out of 10 Cats from 2005–2015, and on 8 Out of 10 Cats Does Countdown from 2012-2021. His routines were often based around deadpan delivery which always went down well.

Lock’s early television work included a supporting role alongside Rob Newman and David Baddiel in the 1993 series Newman and Baddiel in Pieces including touring with them as their support act. Lock credits Frank Skinner and Eddie Izzard as major influences on his comedy. Lock was the first stand-up comedian to perform at Wembley Stadium, as he was the support act for David Baddiel, featured in skits in the middle of the show.

Everyone at Chelsea FC is saddened to learn of the passing of Sean Lock.

Sean was a much-loved comedian, fan of the Blues and a regular at Stamford Bridge. We send our deepest condolences to his family and friends. 💙 pic.twitter.com/SHva9fl5ZJ

Baddiel said: ‘I remember me, my brother and [another Chelsea-supporting comedian] Sean Lock watched that game together and when we left Wembley it was chucking it down with rain. Because it was the height of Fantasy Football it seemed like every Man Utd fan was coming up to me saying things like; “4-0, that’s Fantasy Football for you.”

The three of them often went to watch the Blues at Stamford Bridge, sitting in the West Stand and were described as being a ‘pretty noisy bunch’, before they then moved into the director’s box.

On supporting Chelsea, Sean said to Sky Sports: “My older brother is a Chelsea fan, my dad is a Chelsea fan and most of my cousins are Chelsea fans, so I am a Chelsea fan. My dad is of that era when it wasn’t so partisan. He would go to Chelsea one Saturday and then he would go to Fulham the next Saturday, so I’ve never been 100 per cent convinced that he is a Chelsea fan, although I’m sure he is. But I have always been a Chelsea fan. We’ve got a few problems at the moment, but we’re top of the Premier League and top of our Champions League group. I don’t think there is anything seriously wrong and it will settle down.”

On his first memory of Chelsea: “I remember my family watching it [Chelsea v Leeds, 1970 FA Cup final] on the television in the living room with the curtains closed. I was about six and was too young to really concentrate so watched a bit of it and got bored and walked off. I remember thinking, ‘Why have they got the curtains closed?’ It was to stop the sun shining on the screen, but I went out into the garden and kicked a ball around. The game was a draw and then Chelsea went on and won the replay.”

@paul_o_choirc: Me and my dad had a very brief conversation with Sean on the way to Stamford Bridge once. Was more than happy to have a chat and was an absolute gentleman. RIP, thoughts go out to his loved ones.

@LFCmike_: One of the funniest comedians. Rest in peace 💙🙏

@PQCFC: Terrible news on Sean Lock. Always found him funny with his man of the street and working class style. Never knew he was a Chelsea fan till crammed on the Metro in Munich for the final and he was starting songs in our carriage. Thoughts are with his family RIP

@luisagottardo1: I met him at Stamford Bridge. He was friendly and obliging when I asked for a photo. Such sad news

@BennisonJames: So sad, a genuinely funny man. Loved watching him

@JamieCFC98: Cancer is the absolute worst

@Z4ch3ryW: Very sad news. Such a massive loss to comedy. His humour was refreshingly different and he had his own unique funny style. Condolences to his family and friends.

@sazio1984: Great comedian and someone who came across as a genuinely good man. Such a shame. Condolences to his family. 💙

@Ryan_Jackson15: carrot in a box is one of the funniest things i’ve watched RIP Sean

@milo_ben: My favourite. Gutted. So sad

@SonOfChelsea: Remember seeing Sean Lock in the East Upper over the years, clearly loved Chelsea but was an outstanding comedian who brought so many laughs and joy whenever he was on TV. Really sad news, a great loss. 💙

Really saddened to hear of the passing of Sean Lock who lost his battle with Cancer.

Sean was a Chelsea fan, which goes someway to showing what a great sense of humour he had. One of the funniest people on TV at the moment and he will be missed. #RIPSeanhttps://t.co/TAl8xZAmsb pic.twitter.com/Dla0fGHudd

One of my all time favourite comedians, I’m absolutely gutted, I never knew Sean was so poorly. My love and prayers to his family and friends at this difficult time. I know he will be cheering on the Blues in heaven! 😢🙏🏻💙 pic.twitter.com/HZmPa3T1R5

The genius of Sean Lock. https://t.co/2k2rMPFO5z