Like so many, Danny Mountain had dreams of becoming a top professional footballer whilst growing up, however, they were shattered by an injury.

This is something that he suffered in the latter stages of being a teenager while playing for Southampton, linking up with them as a nine year old and then went on to turn down interest from Premier League clubs such as Chelsea, West Ham and Tottenham in showing loyalty to the club he wanted to represent. 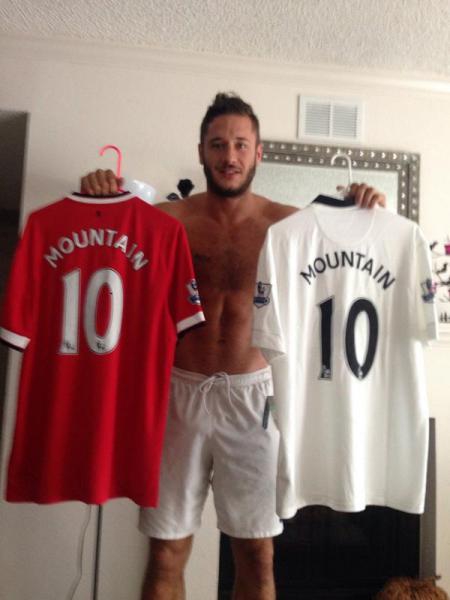 At the age of 16, Danny suffered a serious blow to his knee following a mistimed tackle, going through months of therapy before coming to terms with the fact his career was over just as he was flourishing.

Having already been trained as a carpenter, his career took another surprise turn at the age of 19 following an audition that was initially offered to his partner, who was a Page Three girl.

“I didn’t know what to expect but I was full of confidence. I wasn’t at all nervous about the sexual part. I was worried about talking on camera – I couldn’t control my face I was so nervous.”

One further hurdle that Danny had to manage was telling his family of his new occupation, and boy was his mother left shocked by the reveal.

“But we had a serious talk about it and after a few months she didn’t worry at all. She was worried that I was OK because I was only 19 but I was having a great time and flying all round the world and she realised how happy I was.

He was married to Eva Angelina between 2007 and 2009, and was in a relationship with Mia Malkova between 2014 and 2018 before he detailed their split on Twitter.

Speaking about his life with Eva and baby daughter Silvi back in 2009, he revealed how he brushes shoulders with famous faces from both Hollywood and football.

He said: “We have a nice house, we go to restaurants. I play football here for Vinnie Jones’s Hollywood Allstars, with Jason Statham against people like Frank Leboeuf. We go to Vinnie’s house for barbecues and meet his celebrity friends.”

A report has stated that Danny only recently became Britain’s highest paid pornographic actor, entering the top 10 for earnings with nearly 600 films equating to more than £1million.

Overall, Danny is pleased with how his career has turned out despite his initial plans.

He added: “As a child, I dreamed of becoming a famous footballer. Unfortunately, I will never score for England, but it did not stop me from being successful.

From my Hollywood Allstar FC days 🙁 gutted we all parted ways this year. 6 years, 4 championships and 3 trophies 🙂 pic.twitter.com/QsgTQbMSvO

‘Is scoring a goal better than sex?’ he was asked in one interview, to which he replied: “Absolutely. I work with beautiful women from Monday to Saturday, but the best time of the week is the 90 minutes of football I get on a Sunday.

“Scoring a goal, to me, is simply the most satisfying rush on earth. I could even argue it’s better than sex. If you have to work as hard for sex as you do to score a goal, then my friend, you are with the wrong woman.

“It doesn’t matter which level you play at or even who you’re playing against, but there’s something about scoring a goal that just feels fantastic. Scoring a goal is arguably the best feeling, even better if you are a striker. We live on goals, with a goal on Saturday boosting us all the way till next weekend. It doesn’t even really matter how it goes in—top corner or deflection — that feeling of relief, mixed with absolute pleasure is simply unequalled in my opinion.

“I am often asked how I feel about the fact that my wife has sex with other men, are we jealous of each other,” Danny also revealed.