An ex-Prem and EFL player was axed by Juventus after being caught a club director’s girlfriend and was sent to England as punishment.

In this rather random story, Vincent Péricard, a former striker who played for the likes of Portsmouth and Stoke City, has opened up on blowing his chances of success as an 18 year old at the Italian giants.

The 38 year old, who was the subject of a fascinating documentary entitled ‘The Man Who Will Be Worth Billions’, recalls how he was star struck when he moved to Turin as he joined a team which had the likes of Zinedine Zidane, Edgar Davids and David Trezeguet. He states that his inexperience as a youngster prevented him from truly kicking on. 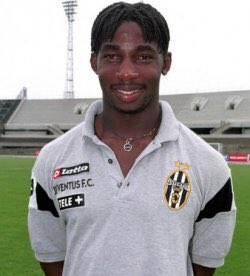 “I knew I was good, but I never dreamed- or expected- to be picked up by Juventus,” Péricard recalls, as quoted by Planet Football. “I didn’t feel any pressure but, looking back, maybe it was because I was 18 and naïve.

“Zidane, I remember, moving past me with the ball so effortlessly, as if he was flying, while Del Piero’s first touch was absolutely faultless.”

Things initially looked on the up for Péricard, becoming the top scorer of Juventus’ second string and making his first team debut away to Arsenal in the Champions League in March 2002. However, he went on to explain how things quickly fell apart because of one night out with fellow academy players Aboubacar Fofana and Frantz Bertin.

Péricard goes into detail on the trio going for a drink and decided to invite their Italian tutor along and within moments of sending a text to the female, Péricard got a phone call from a Juventus director, demanding why he had invited his girlfriend out. Busted!

A few days later, the trio of footballers were shipped out of the club on loan, with Péricard joining Harry Redknapp’s Portsmouth on loan.

“The text message did not go down well, at all. Later, one of the directors called me into his office and told me I was going to England. It was the end of my time at Juventus.

“I didn’t do anything malicious and Juventus’ reaction was excessive. It was a shock to the system.”

After spending time with several clubs in the EFL, Péricard continued his struggles off the field, this time with alcohol and gambling addictions.

He went to jail in 2007 for perverting the cause of justice after he was caught speeding and contemplated suicide after being diagnosed with depression.

He went on to retire in 2011, last playing for non league outfit Moneyfields, and Péricard got himself a first-class degree in Business Enterprise Development from the University of Plymouth, followed by a Masters in Accounting and Finance.

He also set up a management company which supports foreign players when they first move over to Britain and is an alumnus of the BT graduate scheme, co-operating with companies like Coca-Cola and Unilever, state SPORTbible.

Péricard adds that he is in a much better place now than he was during his playing days but says he still looks back and regrets certain part of his playing career.

“There is so much more understanding about mental health today,” he concluded. “I just wish I knew then what I know now.

It would not only have helped me but others who were going through the same struggles. I do wish I had never texted that Italian tutor, but I still think what happened after it was an overreaction.”