The long-serving boss has announced he’s been sacked after eight years in charge, shocking the fanbase.

This comes 24 hours after the club sealed National League South safety with a 2-0 win over an Eastbourne side who sit in the playoff places. 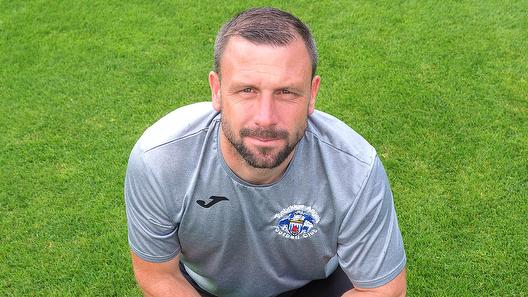 The Board of Tonbridge Angels has tonight (May 3rd) taken the very difficult but unanimous decision to terminate the contract of manager Steve McKimm with immediate effect. The manager was informed via a face to face meeting at which the reasoning behind the decision was explained.

It is the belief that McKimm and his assistant Barry Moore have taken the club as far as they can and would not be able to continue to match the ambitions of the club going forward.

Appointed manager in May 2014 there have been some good times on the pitch with a semi-final play off appearance in 2016, promotion back to National League South via the unique Super Play Off set up in 2019, and reaching the FA Cup 1st Round proper in 2021 for the first time since 1973. There was a decent run in this season’s FA Trophy reaching the 5th Round for the first time in the club’s history.

Despite that, this season in the league has been difficult with just 10 league victories and with one game still to play a meagre 40 goals scored. Security from relegation was achieved just last Saturday.

Chairman, Dave Netherstreet said tonight: “Despite the significant increase in attendances for which we are incredibly grateful to our fantastic supporters, these have not been matched by overall performances on the pitch. Combined with the arrival of the 3G surface next season and the opportunities that brings, it is the genuine belief of the Board that a change in 1st team management is required to allow time for suitable preparations for the campaign ahead. We thank Steve and Barry for their significant contributions and wish them all the very best of luck and success in their future footballing careers.”

1st team vice-captain and Academy manager Tommy Parkinson will manage the side at the final game of the season away to St Albans City this Saturday, May 7th. A search for a new manager begins immediately to take the reins at The Halcyon Wealth Longmead Stadium.

Steve McKimm said to Kent Online that the timing of his sacking from Tonbridge will stay with him for the rest of his career.

“I’m disappointed that, after eight years, this decision was made at a budget meeting and I couldn’t have the proper send-off that I felt me and Barry deserved from our fans,” said McKimm.

“If the board knew something like this was going to happen – these things brew and come to a head, they don’t happen in one day – the decision could have been made on Sunday and I could have said goodbye to our supporters on Monday.

“I was asked if I wanted to take the St Albans game on Saturday but I refused because I’ve been sacked by the club, that’s the end of it, and I don’t want to start making it all about me when the team have got a game to win.

“The difference is, if they’d said on Sunday we’re letting you go, we’re not renewing your contract, even though I would have gone into Monday’s game knowing that was it, it would have given me that opportunity to say goodbye to the fans that have supported me over eight years, through good and bad.

“To not get that is the thing that hurts the most, that I didn’t get to say goodbye, when you’ve done something for so long.

“I felt I brought the club back together from where it was after relegation from Conference South.

“All good things come to an end, I know that, it’s the way it’s been done that I’m not happy about.

“That will sit with me for the rest of my career.

“I’m not bitter about anything, I’m just disappointed in the way it had to happen.

“There’s no right or wrong way to sack someone but after eight years’ service, after everything we’ve been through – the highs and the lows, everything a non-league manager has to go through – it could have been handled differently.

“It’s something that wasn’t expected, it was a bolt out of the blue.

“Normally I’m quite good at sensing things, it might be a player having problems at home and you have a chat with him about things, but I never saw this coming.

“Especially after the game on Monday, winning and speaking to board members in the bar and outside, like normal.

“It hit me for six, I’m not going to lie, as it would anyone.

“I can’t speak highly enough about the club, I’m just disappointed in the way it’s ended.

“I’ve always said managers are going to be surplus eventually, regardless of what they do, because someone thinks something can be done better or a change is needed.

“I understand that but what I can’t get my head around is how it’s been done.

“I already had two pre-season games sorted out and I was meeting a player next week, a high-profile player, who wanted to come and play for us.

“I was working towards next season because I knew we’d be safe, I knew where we’d be and my job was to make us better next year, but I’ve not been given the chance.”

“Although we had the sixth best defence, I knew we hadn’t scored enough goals and that had to be rectified.

“That was in my plan, I’d already told the board that, but they decided I wasn’t the man to take them forward.

“I was told all season we were playing good football, just not getting the rub of the green, which at times I agreed with and other times I felt we weren’t good enough, but that’s me being honest.

“My remit was to stay in the league and we did that.

“It’s a hard league. If you can’t learn from your mistakes and identify where things haven’t gone right, then you’re blinded by your own arrogance.

“But I knew where things weren’t right, I knew what needed to be changed and I’d expressed that to everybody, even the players in the changing room.

“I told them the goals-for column wasn’t good enough, and that’s everybody, not just one person.

“I told them our defence was second to none, and again that’s everybody, because we defend from the front.”

@DavidPantsman7: You’ve lost a very talented manager there , did the board give him money , and support in the transfer windows, to build on the squad ? Terrible decision, good luck in the future.

@MaxMeads_: Club have handled this very poorly. Got us promoted, took us to the 1st round proper of the FA Cup for the first time in many of our lifetimes, and kept us punching above our weight in the NLS for 3 years. No real recognition from the club for their work in this statement… and I won’t lie, it’s not the same ethos of the club I fell in love with. Hope we know what we’re doing, or else Isthmian may well beckon next year without sound leadership & good budgets. McKimm, Moore & Scott were doing wonders with what they were given for the most part.

@MarcOllington: With a horrible environmentally unsound pitch to look forward to and the fact that the board suddenly think they are now running Man City I’ll watch my football somewhere else next year.

@andrewmccormick: Poor decision and disrespectful statement after 8 years of success. Very disappointed in this.

@AndyLunn11: If you have sacked steve and his team do you mean players too ? Wording very poor like your decision do you think changing a good manager guarentees success ? Good luck as I will have a bet you will be relegated next season

@RunOnTheMind: Totally shocked and saddened. Thanks for everything you’ve done @smacca1975. You’ve been brilliant. All the very best for the future. 👍👏👏

@SafelyDoesIt: Unless you’ve got a rabbit in a hat? This is not a good decision. Mc Kimm will move on and deserves better.

@Lawrence2783: Not even given the chance to take the club forward and on 3/4g pitch too next season these boys would have had you soaring. Very poor in general. Wish them all the best, can see this club going backwards and in debt now

@Rayment_Chris: As a fan for many years, I’ve never been more disappointed with the club. Poor, poor decision.

@Batley18: What have you done? Honestly, what do you think is possible above this season. 2nd half season form was around mid table. Really disappointed.

@harrydunmall: This statement is an awful way to break this news. @smacca1975 & @BarryMooro77 deserved at least the St Albans game for the fans to give a proper send of and thank them for what they’ve achieved. Thanks for everything Steve and Barry

@Itsnotlookingg1: Weird decision. He did really well and was very popular and next season was looking promising. What do you want a new manager to achieve? Cue the silence!

@CllrIanBrandon: Terrible decision. Steve acknowledged the team needed to do better this year results wise but performances were good. A bit more quality up front start of season was all was needed. Should have had St Albans game or pre Eastbourne so supporters could thank Steve for his work

@Robcormack: 🤦 Your statement and decision do not add up. You’ve realed off so many achievements he and the team have made but decided that sacking him is the best option.

@RocketJonnie: Wow!! What the hell?! Never expected to see this in the next few years at least!

@headlineswriter: Astonished by this decision which seems deeply unfair. Tonbridge are playing at the highest level in its history. With our limited resources I’m not sure what level the board think we should be at.

@AdrianLove5: I agree. Terrible timing, if they had to do it why not wait until the season is over. Give Steve a decent budget and he would have got better quality players. National South team with a Bostick league budget 😡

@Macca_Hamlet: That’s a horrendous statement. Suspect another manager has batted their eyelashes at your board and if that’s the case then it turns it into a dishonest statement instead of just an incredibly ungrateful one.