In February 2013 he announced he was to step down in the summer with the 2016 World Championship his last tournament for Sky Sports.

In 2014, he was inducted into the PDC Hall of Fame and later in 2014, Gwynne, a Man City supporter, began commentating on Eurosport for BDO darts tournaments such as the Six Nations Cup, Winmau World Masters and the BDO World Championship. 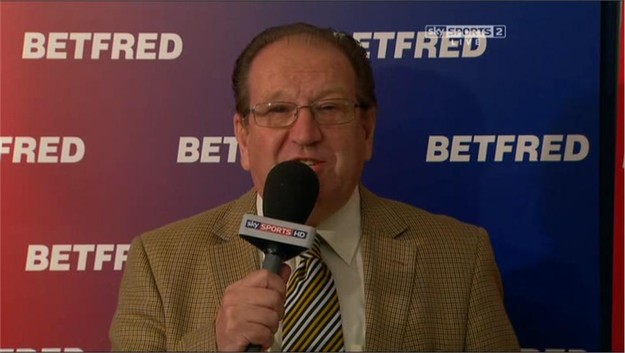 In the years that followed, he made occasional commentary appearances on Sky Sports during the early rounds of the PDC World Championship, however he didn’t do so in 2020, though did work extensively on talkSPORT’s radio commentary of the event.

His first media job was covering speedway at Belle Vue in Manchester for Piccadilly Radio in 1980 and then moved onto local North West football and contributed darts coverage on a weekly show called Talking Sport.

His first properly paid commentating job was covering Lancashire County Cricket Club matches for a phone line based service called Cricket Call. He did this from 1988 until 1991.

In 1989 and 1990, Gwynne, with the help of darts entrepreneur, Dick Allix, set up a darts phoneline service called The Darts Line where he would talk all things darts to a paid phone number that people would call up.

Gwynne and Lanning commentated on the first WDC World Championship at the Circus Tavern in 1994. Gwynne, Lanning and Waddell commentated together for the first time on the World Matchplay at Blackpool in July 1994.

As mentioned however, Jeff Stelling pays a heartfelt tribute as the Sky Sports reporter ‘nears the end of his life’.

Andrew Gwynne MP, John’s son, wrote on Saturday the 2nd of July 2022: My dad, @OnlyJohnGwynne, is nearing the end of his life’s journey. We’ve been lovingly caring for him at our home in Denton for the past 8 weeks. Cancer has got the better of him & he’s lost the use of his legs, is catheterised and has been placed on ever stronger drugs.

Today he’s pretty much fallen into permanent sleep. In his brief lucid moments he’s been calling out for my mum. I have a feeling they will be together quite soon.

My favourite John Gwynne moment, deeply saddened by the news, thanks for all the memories, the advice and the friendship John and love to all the family pic.twitter.com/afZKUhwoqM

@KevinMorton1966: So sorry to hear this.

@j_murphy27: I am so sorry to hear this your dad is a true gentleman couldn’t have been nicer to us as a team when we were at the socca world cup with ireland in crete one of the best!

@HamnettPhil: Thoughts and prayers from all at Miles Platting Blues

@MrSpannersNuts: You are definitely in my thoughts and prayers. I’m very sorry for your family . John made sport sound fun for me both in the darts and football on a Saturday. Stay strong x

@LFCforLife11: Oh Andrew I am so very sorry, I have had a few conversations with your amazing Dad, he is one of my commentating idols and loved him on SS, love and thoughts are with you all xx

@MCFCFortWorth: Very sorry to read this. An absolute gentleman, sending deepest sympathies from across the pond.

@CafcBen2021: Very sad to read this. My thoughts are with you and your loved ones through this difficult time. One of the nicest men you will ever meet. Sending my love ❤

@HanSparkle86: So sorry to hear this Andrew, no matter how old you are you are never ready to lose a parent 😢😢😢 thinking of you all xx 😢

@ManUtdMrs: Your lovely dad used to call in the Lamb Inn in GX sometimes and do a running commentary on our darts matches, which was hilarious as some of us were rubbish. He leaves us with many happy memories of the good times. Wishing him peace and love xx

@LFCforLife11: Your tweet just got me Jeff, John is a complete and utter legend and a gentleman too x

@RyanPalmer180: I met John on a couple of occasions, and all I can say is what a gent he is!!! Thinking of all his family and friends! To watch a loved one go though C must be horrendous! ♥️

@talkdants: Very sad to read this Andrew. Thoughts very much with you and the family at this time x

@JRTerrier24: So sad, I met him at a darts exhibition in Huddersfield a few years ago, and his knowledge of all sport was there for all to see, and was even talking about his last football commentary at Town. So sad that we’re probably not going to hear his tones again…😞😞😞

@DaveHutt1: Thoughts and prayers with you all, what an absolutely wonderful man your dad is and so lovely he is receiving such fantastic care 💔

@britheblue1979: Best wishes to you and your family Andrew. I’m sure there will be 1000’s like me who grew up listening to your dad bringing games to life for us. 💙

@claretdan78: Bloody hell was the voice of radio Lancashire when I was younger then the voice of darts prays with you all this year is becoming a real bad one

@wormymufc19: So sorry to be reading this! I captain a team in Urmston that play log end, what your dad has done for that federation is outstanding. I’m sure I speak for everyone who’s been involved in one of the comps held at the lightbowne pub, our thoughts and prayers are with you! 💔💔🎯🎯

@FarFlungFatty: Very sorry to hear this Andrew. I met your dad many times at darts events and he is the greatest sports commentator ever. More so though, a lovely man with such enthusiasm aa well as knowledge. Great company and very proud of you and the family. Thoughts are with you.

Sorry to hear the news Andrew. Had the the pleasure of working with your Dad back in 2016 at City. An absolute gent that managed to make a loose idea of Kelechi Iheanacho liking darts into something watchable! Love to you and everyone connected to John.https://t.co/tIIVnPUIkQ