A young Wrexham fan, 15, has ended up with a broken jaw in a brutal assault after watching his side win at FC Halifax Town in midweek.

The football community were so impressive with Wrexham’s turnout at The Shay that they were trending on Twitter at one point, but while many in the away end were jubilant, others left the ground witnessing trouble break out with one teenager attacked.

The victim, who is said to have been attending his first Wrexham away game, has reportedly suffered a broken jaw and will have to go in for surgery, North Wales Live understands.

Real sour note @FCHTOnline was leaving the ground and seeing a young lad, face smashed up, talking to police. 14 yrs old, his 1st @Wrexham_AFC away game, there with schoolmates and a Dad. Attacked by older blokes.He has a badly broken jaw. Awful. Can anyone help @WestYorksPolice

The assault allegedly happened on Union Street South, close to the part of the ground where the travelling support are housed, shortly after the National league fixture had ended with West Yorkshire Police appealing for witnesses to come forward.

Police have called on anyone who has any information to get in touch with them to assist in their enquiries.

A statement from West Yorkshire Police said: “Police have received a report of an assault on a 15-year-old male which allegedly took place on Clare Road in Halifax at around 9:30pm on Tuesday night (23 November 2021), following the Halifax Town versus Wrexham football match.”

“Enquiries are ongoing. Anyone who may have witnessed the incident is asked to contact West Yorkshire Police by calling 101, or online via www.westyorkshire.police.uk/101livechat, quoting reference 449 or 23/11.” 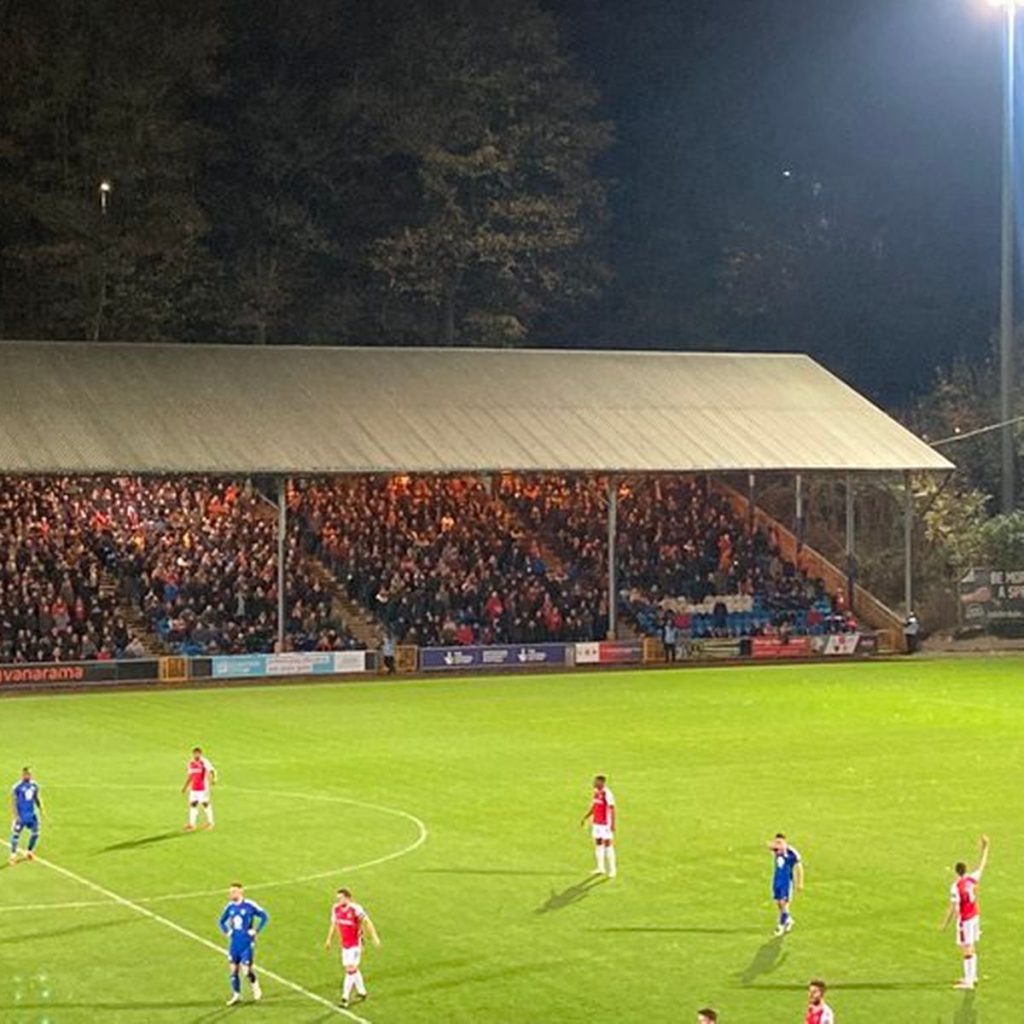 DI Simon Archer of Calderdale CID said: “We are carrying out extensive enquiries into this serious assault which has left a young male needing surgery due to the nature of his injuries and we will do all we can to identify those responsible.

“Given the time and location that the assault took place, there will have been a number of people in the area, leaving the stadium and making their way home.

“Anyone who witnessed the assault or has footage which may assist with enquiries is urged to contact Calderdale CID on 101 quoting crime reference 13210606578.”

Information can also be given anonymously to the independent charity Crimestoppers on 0800 555 111.

FC Halifax Town were approached by the media for comment, however say they were unaware of any incident on Tuesday evening.

Twitter users have since reacted on reports a young Wrexham fan, 15, has broken jaw in a brutal assault after the Halifax win…

@stuartchaffer: Cheers Bryn. The young lad was with me and my son. We’d literally turned a corner to head to the car when they were set upon by some men. The police were very helpful to be fair but any footage would be a godsend. Awful thing to happen on his first away day.

@MarkFCHT: The atmosphere was very toxic after the game, from a small number of fans from each club. Why did the police let both sets of fans out together, I absolutely condone what happened to the young Wrexham lad it’s very unfair. Wrexham have a reputation which probably didn’t help

@rhysedwards09: Poor lad can’t chew for a week, his brother sent me photos of him this morning

@DaveJon57515832: 6 of us (average age 50+) went to Royal Oak after game. One of us wearing scarf. One prick (in burberry and about 50+) demanded he take his scarf off. He wouldn’t. Bit of an atmosphere. But to be honest majority of HTFC in there were great bunch. Same as us,not out for trouble

@Emmaburnell: Oh christ how disgusting. I’ve often taken Freddie there in previous seasons when we couldn’t get to Leeds games, im gobsmacked!

@Stevewxm85: Hopefully @Wrexham_AFC can invite the lad down to the club to meet some of the players

@ClairePayne: How awful…. I have a 14 year old and the thought of someone doing that to him turns my stomach… really hope the young man makes a fast a full recovery

@djspireite: Unbelievable. Poor lad. Those days have long gone surely. The fans in this league are outstanding people, this is very rare thank god. Never had any problems all over the country. I’ve met some really nice people in the years we’ve been down here! Name and shame! A Spireite fan.

It all kicked off on street half way down the hill… my car got kicked in… did get a bit messy pic.twitter.com/l2ZMV5sN4w

@lambrettarob66: Thought we had left all that shit behind back in the 70s early 80s…. #Noneed

@cfc_williams: That’s just a bunch of cowards to do that to a young lad 🤦‍♂️ we caught up with a few #Halifax lads walking to the ground, shouting they hate Wales… once we made it know we were @Wrexham_AFC, they soon changed their tune 😂 right as rain then 🤷‍♂️🤷‍♂️ we go to cheer our team END OF

@WillClayton08: Crazy how the club aren’t doing anything about it. They were all over incidents from our fans like a rash. Couldn’t give a fuck when it happens to us

@danzolambo: Despicable. What absolute cowards. This sort of people have no place at football matches any more.