Fans has been left disgusted and annoyed as the Premier League‘s Big Six are discover their punishment over the failed ESL attempt.

The six English clubs who were outed for agreeing to play in a European Super League will pay just over £20m to end their ensuing row with the Premier League.

Sky News has discovered that the figure – which equates to an average of around £3.5m per club – is set to be announced on Wednesday afternoon. 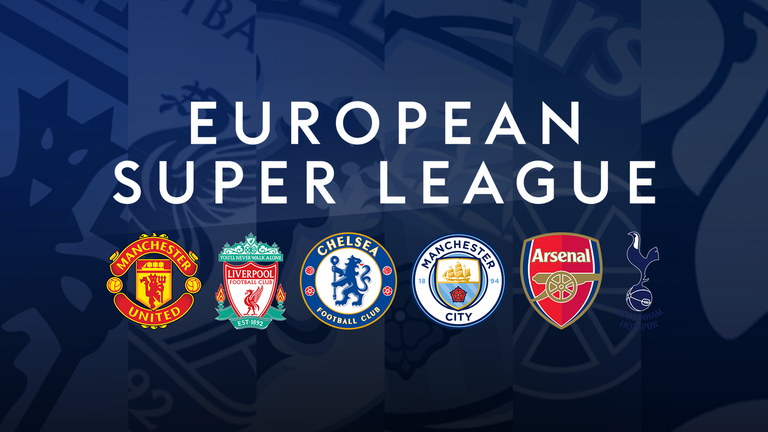 Sources close to the agreement said that it also included the prospect of severe penalties for any similar transgression by Arsenal, Chelsea, Liverpool, Manchester City, Manchester United or Tottenham in future.

Any of those clubs which signed up to a similar project would be liable to a penalty of more than £20m and will also see them handed a 30-point Premier League deduction, according to one source, though fans of other clubs want it now as they feel the one handed to them now is a slap on the wrist.

The Premier League-imposed fines are comparable to those imposed by UEFA, which announced a package of “reintegration measures” for the nine clubs who agreed to pull out of the ESL during a frantic 48-hour period towards the end of April.

Along with the AC Milan, Inter Milan and Atletico Madrid, the ‘Big Six’ agreed to pay a collective €15m (£12.9m) to be invested in children’s, youth and grassroots football, with five per cent of their revenues from UEFA club competitions being withheld for one season.

They also agreed to much bigger future fines – worth as much as €150m (£129m) – should they breached commitments in UEFA’s Club Commitments Declaration, or apply to any similar breakaway format.

Arsenal and Man Utd will receive relatively modest European income this season because of their failure to qualify for the Champions League.

UEFA are yet to reveal which season the five per cent revenue penalty will apply to.

Unlike the UEFA fines, however, the Premier League’s penalty sanction will be a straight cash sum rather than a percentage of next season’s broadcast income – an option that was also discussed lately.

In the end, they settled for a substantially smaller proposal made by the Premier League last month, which was a £15m fine per club and a substantial – albeit suspended – points deduction.

However, the Prem directors have decided that drawing a line under the European Super League project was a major priority ahead of the league’s annual conference – attended by all 20 clubs – beginning on Thursday.

It’s unclear whether all six Big Six clubs would pay equal sums. They abandoned the ESL project amid a huge backlash from rivals, fans and politicians, with fans expected to boycott giving the clubs money in some way.

Only three clubs, Barcelona, Juventus and Real Madrid. have yet to formally withdraw from the ESL – and that could see them banned from next season’s Champions League.

The Premier League announced last month that it had reached agreement with broadcast partners, including Sky Sports, to renew its existing £4.7billion television rights deal for a further three years.

In an attempt to prevent future breakaway bids, the Premier League has revealed the creation of an ‘Owners’ Charter’, which it said had the Football Association’s backing.

It added recently that the six clubs’ participation in the European Super League “had challenged the foundations and resolve of English football”.

The government is expected to welcome the move to punish the six, however it’s unclear whether the financial penalties issued on them will be redistributed among the other 14 top-flight clubs.

Confirmation of the ESL’s existence, which came six months after key details of the project was revealed, sparked unprecedented protests against the owners of many of the participating English clubs.

Arsenal received an unsolicited takeover bid from the Spotify billionaire Daniel Ek, while Manchester United’s largest shareholders, the Glazer family, said they would allow fans to buy shares in the club.

Executives from the six clubs have been removed from several Premier League sub-committees.

This is a move that could be reversed following the agreement of a financial settlement.

A fan-led review of football governance has been commissioned by the government under the leadership of Tracey Crouch, the former sports minister.

Its panellists will include the chief executives of Everton and the Football Supporters’ Association.

@LiamNUFC98: It’s like giving a child a slap on the wrist if that was clubs like Palace, Brighton, us, Wolves, Everton and Norwich we would get points deduction

@jimmydoris1986: It is bizarre that they have agreed to pay this fine. My understanding of consequences and punishments is that the guilty party isn’t allowed to participate in the enforcement of the punishment. Pandering to them again. Villa, Leeds, Everton, Leicester etc would have lost points!

@Adeotbc: So they “agreed” to do that did they, sounds like they are still very much in control, the people in charge have got no power, they should have fined them, deducted points and banned them from champions league for 2

@didz2107: Heard that Arsenal & Spurs will also be fined a further £10 million for trying to impersonate a big club.

@sgt23996382: That’s me done with football. Seems there is one rule for the so called big six and one rule for the rest. I wonder who from the premier league agreed this figure. It’s just a very light slap on the wrist. They have not officially left the super league. They might say they have.

@BCAFCBH: They honestly might as well not bother. This was their chance to send out a real message by issuing points deductions and they’ve totally bottled it. Shambles.

@BirdsallAlex: 20 Million which in todays money in football is sod all. Especially to those of the big 6. Should have been that and a points deduction MINIMUM and before people say it not right to punish the fans tell that to Leeds Bury Wigan Portsmouth and Blackpool supporters!

@DerbyStatistics: £3.5M to draw a line under it when the shittest player in any of their starting 11 would probably be at least triple… yet Macclesfield and Bury now don’t exist thanks to the EFL… it’s beyond a joke! #dcfc #dcfcfans

@Stesmith1992: If they filtered this money down to the lower leagues it would be great, but we all know for certain each fine will line the pockets of chief executives/top bosses who work in the prem/fa load of shite. Not a big enough deterrent for it not to happen again!#europeansuperleague

@blakeleyjono: Wow… If you need anymore proof that The FA have a staunch favouritism towards these clubs then this is it Shameful, I feel for the fans of lower league clubs who were punished far more severely for arguably much less #corruptfa

@r4chaelc1878: I’m sure lessons will be learnt after this suitable punishment. By that, I mean the lesson will be that the Shitty 6 now know they can do whatever the fuck they like. Well done @premierleague, you’ve just signed your own death warrant. Don’t be crying when they fuck you over.

@bobbi_efc__: So they’ve literally got away with it, you gang of horrible greedy shithouses

@DiscoDaveToon: Should have been deducted 30 points this time! Joke @premierleague #PremierLeagueIsCorrupt

@andyfaeayrshire: Should have been 20m each

@steveysey: 3.5m each, they spend more poaching an academy player who never gets near the first team.

@littlelegsessex: Is this really suppose to be a punishment. This is worse that doing nothing at all

@Scrivs25: Not 30 points, but a penalty should be in place for this coming season in my opinion.

@Fennabahce85: That 20m will work wonders for the hundreds of non-league clubs that won’t get to see it

@Dayts1: Give the money to clubs who are struggling in the lower divisions 🙏

@AidyDews: Pffft, basically a slap on the wrist, don’t do it again gesture 👀 🙄 🤦🏻‍♂️ That is fuck all, each of those clubs could of given that to charities! Fine em properly, dock them points. Doing what they’ve done will just entice them to try and break away in years to come!

@gazbod: Wait……so the #ESL “big six” also get to negotiate their own punishment? Wtf @premierleague

@101andyhibberd: So a fine of just £3.4M each eh @premierleague? They’ll have that in Petty Cash. How about docking each of the ‘Big Six’ clubs 15 points for the 2021/22 season instead? That might focus a few minds. #FansNotCustomers

@BenBoo1984: If this is true it is a disgrace. That’s pennies for the “Big 6”. Just goes to show that the governing bodies are not fit for purpose. Hang your head in shame @premierleague and all those involved. They’ve let the game and fans down in a way that will never be forgotten. #farce

@danielf1865: pathetic really, even the future punishments are pathetic, they would have got hundreds of millions from the SL and they are now being threatened with a £25m fine and a 30 point deduction, what use is a 30 point deduction for teams that would t need to qualify for Europe anymore?

@RyanConnell84: Absolute buttons then – and no sign of the 30pt deduction this time around as everyone will have learnt their lesson. Deduct the points now and make an example of them – otherwise the points deduction is a busted flush

@Duality_90_: Birmingham City fan here. We got docked 9 points and almost relegated due to rules brought forward by the big six. Financial Fair Play. If this evidence above shows one thing, it shows fair play isn’t even close to what they want. They want a closed shop.

@EFCKingy: That will show them 🤨🙄

@Other14The: Don’t think everyone will think it draws a line under it…

For context, those six are collectively expected to recoup £881m from Premier League income for the 2020/21 season.

One of many reasons why football needs independent regulation https://t.co/h1lY6dJty5

Further proof if any of you need it that the EPL is corrupt and the Cartel run English Football. Remember what happened to Rangers? For financial irregularities? Nothing is worse than a CARTEL!!! The whole thing stinks & those that support it on social media or otherwise are bent https://t.co/gm9aXG3AT5