Viewers were left surprised as Paul Merson leaves the Sky Sports studio live on air during one of his match report duties.

The former professional footballer and manager turned Soccer Saturday pundit was commentating on the Championship clash between Norwich City and Barnsley.

The game was so boring however that by the time the referee blew the whistle for half time with the scoreline 0-0 and hardly worth watching.

We thought it was all systems go when he left the Soccer Saturday studio live on air 🤣 pic.twitter.com/HErcMyilwy

The pundits including an excited presenter Jeff Stelling thought Merse might have received some news that the ex-Arsenal player’s wife as she’s in hospital.

They went for an ad break with the half time scores being read, but he soon returned ready for the second half of the EFL fixture with Jeff questioning why Merse had left.

Hoping that he had news on his expecting wife, Merse said that he just decided to go to the toilet, leaving many disappointed that it wasn’t the all important news of an incoming baby.

His wife had even questioned why he left the studio before returning. Merse then urged his wife to hurry up and deliver it, even so he couldn’t see any more of the game.

Michelle Owen, covering the game at Bristol Rovers and Blackpool, made a cheeky jibe at Paul Merson and (soon to be Grandad) Alan McInally for telling a woman to hurry up and have the baby, which then provided laughs in the studio.

Merson had trouble when reporting that Emiliano Buenda had opened the scoring for Norwich on the 62nd minute. He couldn’t pronounce the name right before joking that he’d struggle having to home-school the kids.

Merson, who is actually quarter Italian, has been married three times (to Lorraine, Louise and now Kate), and has seven children and another due in January 2021, including one set of twin girls. His son, Sam (from his first marriage); is also a footballer and plays as a striker for St Albans City of the National League South.

His first marriage finished under his recovery from drug addiction and alcoholism, which he seems to be recovering well from of late. In October 2011, Merson was involved in a car crash with a lorry on the M40 near Warwick and arrested for drink-driving. 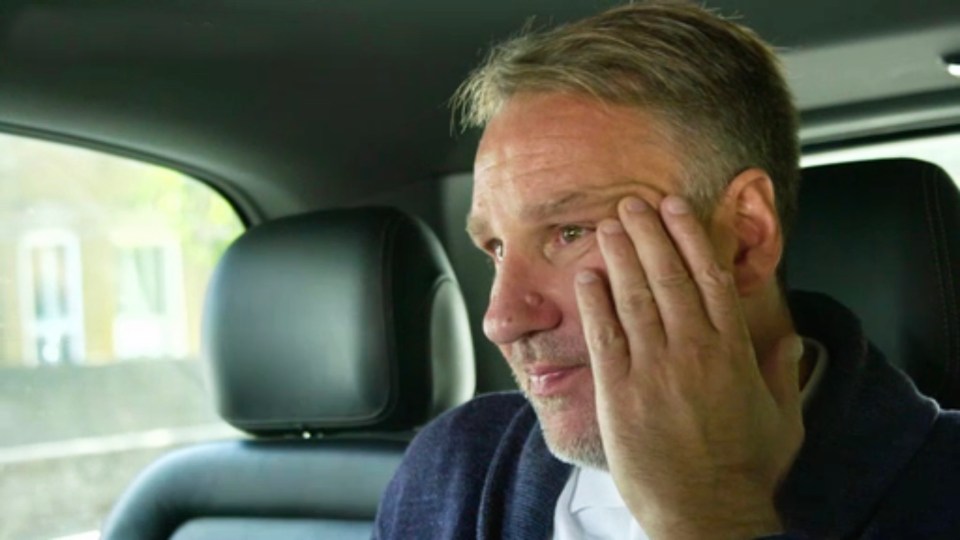 While appearing on Harry’s Heroes: The Full English, a 2019 ITV documentary, Merson revealed all about how substance abuse and gambling have affected his life, and his continued struggles with addictions but is geting better. He received praise for his candid discussion of the topic.In the second series Merson confided in David Seaman, that he voluntarily attends AA, including English speaking meetings in Paris, during breaks in filming for ITV’s Harry’s Heroes: Euro…Having a Laugh.

In 2018, Merson participated in the Mental Health Awareness Week and January 2020 saw Merson spoke about how his drink, drug and gambling habits fuelled his struggles with mental health, no doubt spreading awareness and hopefully providing help for those in a similar position watching at home or online.

As mentioned, many viewers were left surprised as Paul Merson leaves the Sky Sports Soccer Saturday studio live on air during his match report duties.

See what they had to say in tweets and quotes below…

@WayneBirchy: As if Paul Merson is still working on soccer Saturday when his Mrs is due lol

@AndHill2: Paul Merson leaving Soccer Saturday early, his Mrs having his 8th kid. Fuck me rather you than me Merse

@dannysmithlaaa: Pssst… Paul Merson’s got a weak pull out game, pass it on.

@lorenbirkett_7: Paul Merson is on his 8th child, does he not watch TV?

Paul Merson soccer Saturday when his wife texts saying she gone into labour for his 8th kid. https://t.co/v0tdkquPCV

Paul Merson turning for the birth of his eighth kid like it’s nothing.#SoccerSaturday pic.twitter.com/kWozags59A