A non league match ends up gets interrupted by four power station chimneys getting demolished, which was also caught on camera.

Four cooling towers plummeted to the ground at 11:15am on Sunday morning to make way for new homes in the area of Rugeley, Staffordshire.

Crews were in place at the Rugeley Power Station to use explosives to bring down the 117-metre tall structures.

Staffordshire Police urged any spectators to avoid making the journey to watch the demolition and have encouraged people to watch a live stream of the event – though, it would see some had the perfect view at a stadium nearby.

The cooling towers were the latest parts of the Rugeley Power Station to be demolished – to make way for 2,300 new low-carbon homes.

French energy firm and the power station’s former operator, Engie, is planning to redevelop the site for housing and employment space.

A demolition exclusion zone had been set up along the A51 between the Trent Valley roundabout and the new Hawksyard Estate roundabout from 5.30am to 3pm. 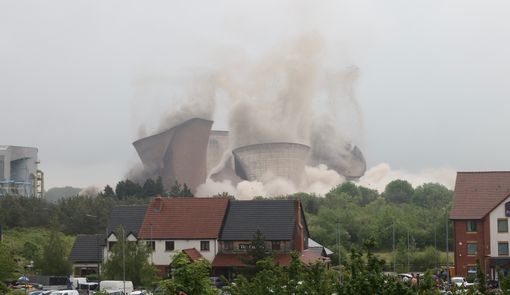 The coal-fired power plant closed in 2016, so taking these chimneys down was long in the plans.

Energy minister Anne-Marie Trevelyan said: “We are committed to building back greener from the pandemic and Engie’s low carbon regeneration project is a great initiative demonstrating how industrial sites can be revitalised to provide sustainable living.

“This innovative redevelopment will help breathe new life into the local community, providing new jobs, thousands of low carbon homes and a new school, while supporting our ambitious climate commitments.” 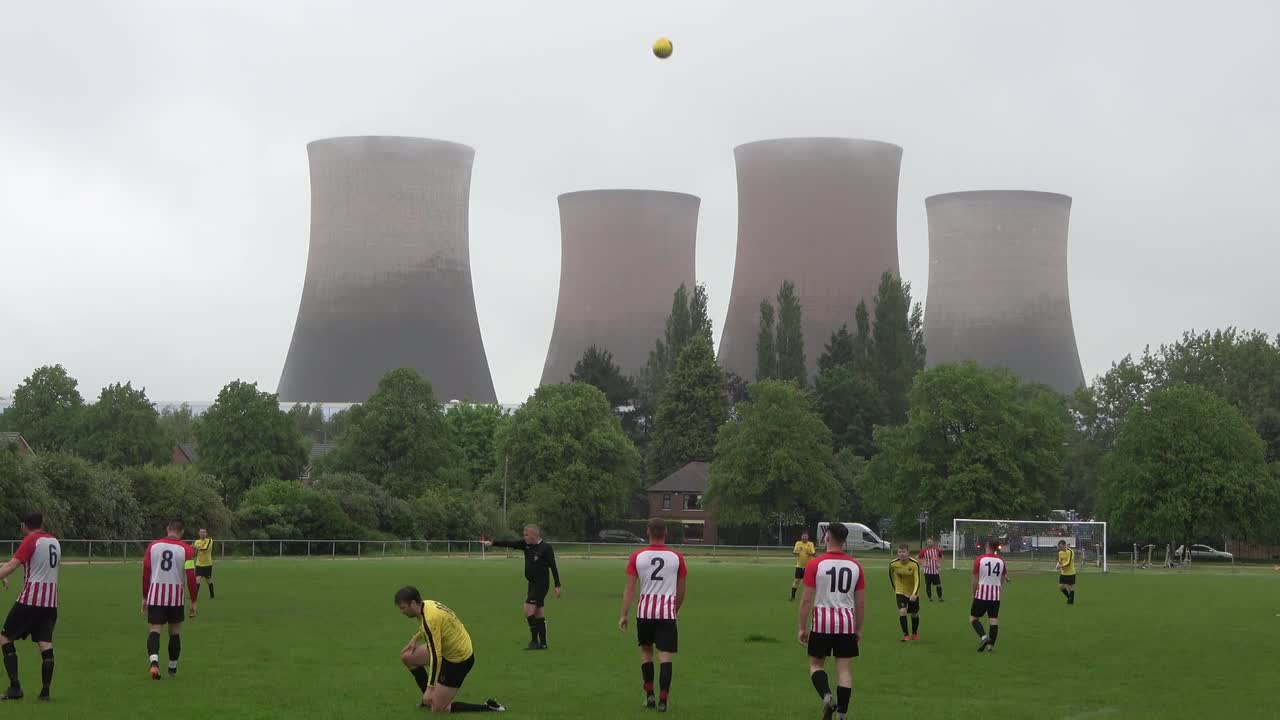 Fans took to social media as a the non league match gets interrupted by four power station chimneys getting demolished, get ready for some hilarious puns that we just couldn’t leave out…

@CardyFreddie: Gone down way too easily

@shauncrowe1981: This back 4 is known to crumble under pressure.

@Blueystone12: Cooling towers take their lead from England, and take a knee.

@GoodersFMS: I knew that back four would crumble under pressure!

@cocoefc: Did he score the pen

@AnthonyMalbon: That’s a dive that is

@Rockstrophotos: Really good footage! I only got some Misty photos 🙈 but the crowds and banter were good fun. #rugeley ❤️

@RobNorwood6: Sweeper’s got their work cut out today.

@NiftyNick4: Those chimneys have gone down quicker the Grealish…. And that’s saying something

@happyharryplank: They’ve gone down far too easily for me, Clive.

@SALOPIAN4LIFE: Great decision by the referee for the penalty!!!

@markkulke: Never a pen that

@billm: This video must be used to summarize each group stage England match in the Euros……..no further illustration required.

@TomRoyActor: Could wait until halftime at least

@DOWHU_1995: What an explosive contest that was

@bounder: Restart with a drop ball?

@Gareth19801: Not something you see everytime you go to match

@liamardo1: Had a game paused for many things but never this.

@TomFarrey: Too bad someone didn’t hit a banger … THEN the chimneys fell. Highlight of all highlights.

@Benjaminwiz1: But did matey convert the penalty though?

@andy_gurr: Imagine if you were clean through on goal, just about to shoot and then this happens.

@AustinTMerrill: Filing under “things that look fake but are real”

@Scraggy_74: Can’t believe that people have been watching England of their own free will, when this has been readily available to watch instead.

@RobWarren1990: That is absolutely mental

@TheMarkHowarth: Scenes when @SpursOfficial play Macedonian 4th division champions in the Conference League (Which still doesn’t have its own Twitter account yet 😂)

@Webbox2: This is insane

@SkybundleBill: The game must go on.

@Grahnen15: Anyone else heard the evil chuckle in the background? I think we’ve found the man behind the demolitions. 😂

There’s a pen in the game
By the big cooling tower
Will he go placement
Or will he go power? pic.twitter.com/XeL70Wvt74

Someone needs to give these this much attention to detail pic.twitter.com/5zgJy5nWtt