A video has emerged as Kyle Lafferty faces angry Kilmarnock fans who were protesting outside the ground with relegation confirmed.

The footballer faced the group of supporters outside Rugby Park in the aftermath of their relegation from the Scottish Premiership on Monday night.

Lafferty was part of the side that were defeated 2-1 by Dundee in the second leg of the play-off, bringing an end to their 28-year stay in Scotland’s top flight with a 4-2 aggregate defeat.

A group stayed outside the stadium after the match to outline their anger and Lafferty came out to speak to them and ask them to move. 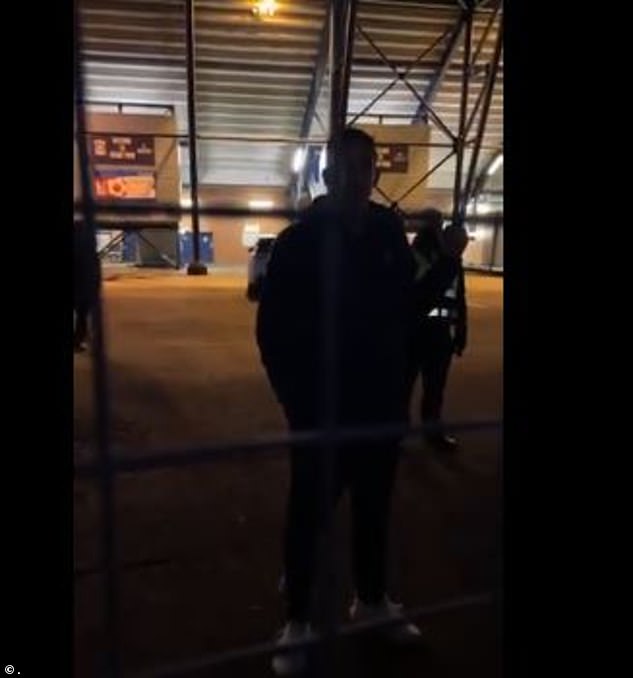 In a video captured by one of the fans, the 33-year-old Lafferty said: ‘We’ve let you all down, we know we have. We weren’t good enough all season.

‘There are boys who have been at the club ten years. The kit man is crying.

‘That was one of the team talks this morning. We said we would do it for them – but obviously we couldn’t.

‘There were too many mistakes that we couldn’t get back from. But can you let the lads go?’

The former Rangers and Hearts man appeared to go down well with the Kilmarnock fans after apologising.

The supporter who uploaded the video to Twitter wrote: ‘One man came out to face the fact we were relegated and apologised for it while everyone else drove away or stayed inside.

‘There is players in there that’s been here for 10 years and couldn’t come out to face it and Kyle Lafferty was the only man who had the balls to do it!!’

One man came out to face the fact we were relegated and apologised for it while everyone else drove away or stayed inside there is players in there that’s been here for 10 years and couldn’t come out to face it and Kyle Lafferty was the only man who had the balls to do it!! 👏 👏 pic.twitter.com/aZD2rGF5z1

Lafferty scored a 69th minute penalty in the 2-1 defeat on Monday night. Speaking after the match, Kilmarnock manager Tommy Wright said: ‘We didn’t do enough. We didn’t compete enough.

‘Dundee were stronger but they didn’t have to do a lot to win either game. We gifted them three out of four goals.

‘The first goal tonight is absolutely embarrassing from our point of view. No-one took responsibility in a two-v-one situation and we end up behind the eight-ball within the first 15 minutes.’

WHAT WAS SAID POST-MATCH

“It’s a crying shame for the club and the town. It shouldn’t have got to this. I’ll still this take as my responsibility because ultimately it was my team that went down, irrespective I’ve only been here a short time.”

Dundee midfielder Charlie Adam: “It means everything. It’s a club I supported as a kid. I don’t think it was in danger over the two legs. I thought we were excellent.

“I’m going to enjoy this as this is as big as it gets for me. It’s a great league. I’ll delighted if we can get Rangers and Dundee United in the first two games.”

Dundee managing director John Nelms: “These boys worked so hard throughout the year, through thick and thin. This is where we thought we would be and the goal this year was to get promoted and here we are.

“The next step is we take a breath and then we see what we need to do because we have big aspirations. We don’t want to just be staying in the league. We want to be up there with the big boys.”

@Dunny1406: Love him or hate him that’s different class from him 👏

@CazNula: @Beatthatbeat does this make you love him even more?

@maxibhoy: Ffs he never turned up at the most important time .

@owenmt_1: 13 goals in 13 games shows he clearly did and the root of the problem wasn’t him was it?

@PRodgersN: The big lad wears his heart on his sleeve, top lad

@Arealrangersda: At least no sharks where in or around the Kilmarnock area.

@marc_tannock: His hearts always been in the right place. Fair play Laff 🇬🇧👍

@PaulCla38979888: A club the size off Killie should not be in this situation but glad to see the back off that horrible pitch, that sh1t should be banned from the professional game.

@chrisbell1987: What about when hibs and hearts got relegated? 😂 it doesn’t matter the size of the club if it’s not run properly there’s no chance.

@wintour_alan: Class from the big laff

@JcteamDevlin: Sending our best player out & the only one who genuinely cared about our club and it’s future who tried to keep us up with his goals to receive the frustration from our fans is absolutely embarrassing Billie Bowie + Gary Dicker should be out there speaking for the club. 👀🔵⚪️🤬

@55brownsagrass: Kyle what a pan…fair play last! Oozes with class

@Ljt10x: What a boy lafferty is btw, only been there a matter of months and can see hes devastated. Doesny say much for the rest of them

@lamrock52: Kyle Lafferty is one of the best

@VodkaLoyal1: Lafferty out showing face to the fans having only been there a few months then theres That wee dobber Dicker hiding in his car tweeting attemped wee digs 🙊 Byeee Byeee Killie 🐸☕️

@ScottHughesss: WE FKN LUV U LAFF 😂😂😂

@MrBenGrant: This sums up this squad to a tee, gutless. Send the one guy who actually had a positive impact on our performances the last few months out to beg the fans to let the players home. Embarrassing! Fair play to Lafferty!

@carthur06: No many players would do something like this. Well done Lafferty!

@CoryRogers19: Big laff out to face the music fair play

@ciaran_hunter65: Only player that had the brass neck to come out and speak last night.

@aht1869: Sent out like a sacrificial lamb because the hiding players knew he wouldn’t get any grief. The plea to let players out at the end summed it up. He’s no staying. He’s aff.

@Championees55: Part time football awaits. They will be begging Ayr for a groundshare when Lidl buys that stadium off them to keep the lights on. Reap what you sow.

@adam_brown72: Have to say, this is what’s missing in football ⌛

@JDHibs: Fair play. Has showed more balls there than any of our players. I get the anger towards the players & Hibs but the players not taking the time to apologise to the fans is unacceptable after the performance they put in collectively. I can accept getting beat, but not like that!

@DFW_GER: The rest stayed back due to egg on their faces and not caused by Clubfoot poaching eggs again. Bye bye Kilie..

@davy_gallacher: Thats what its about fairplay

@William04150909: Model professional. @JamTarts get the band back together!

@ChrisMcL16: No offence but do your fans deserve an apology? You couldn’t even half fill your ground when you were finishing 3rd ffs. Maybe club will apologise to fans when fans apologise for not backing the club at their height.