VIDEO: Drunk Ross Barkley booted out of bar after row with diners – squares up with security

A drunk Ross Barkley gets booted out of an exclusive bar after having a row with diners, with witnesses speaking of the ordeal.

The Aston Villa midfielder — on loan from Chelsea – was escorted out of the posh eat out by security after having a full blown argument with those trying to guests and staff.

The pissed up Premier League player was seen and heard slurring and could barely stand, one witness said and they gave their account of what happened.

The 27 year old had been drinking heavily with a friend in The May Fair Hotel in the centre of London before being kicked out at 8pm. He swung his arms towards a customer’s face as he stumbled to the door and even squared up to a member of the five-star hotel’s security team.

Barkley, who currently brings in £100,000 a week, left with this friend before they came back towards their table and were confronted by security and told again to leave the premises.

Barkley again looked unable to stand and had to be supported by two men. As he leaned over his bright pink underwear was on display.

The embarrassing situation was played out in front of about 100 people at the hotel’s May Fair Kitchen, which sells Dom ­Perignon Brut Rose Vintage for £475 and a Chateau Lefite Rothschild for £1,600. 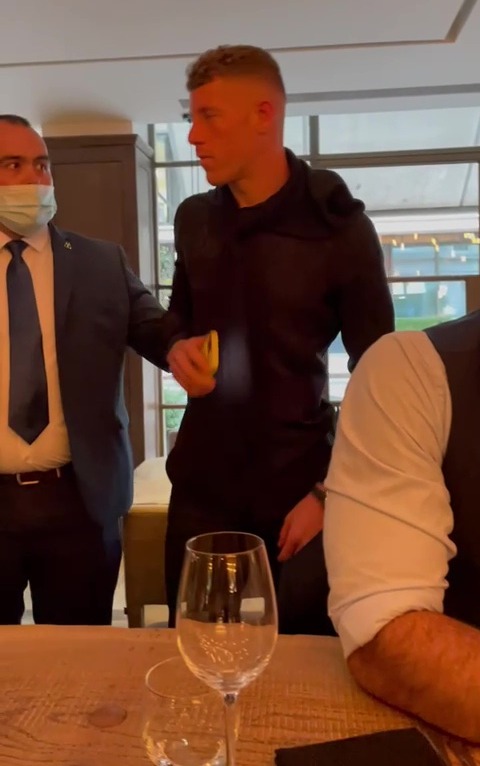 A source told The Sun: “Ross Barkley was wasted. I first spotted him arguing with someone before it really kicked off. Ross was politely told to leave. But they came back, stumbling around packed tables and really slurring.

“Then the security staff ­spotted him and they were escorted into the main foyer.

“It got heated. They were arguing. It almost got physical, with the bouncer just pushing them out of the way. 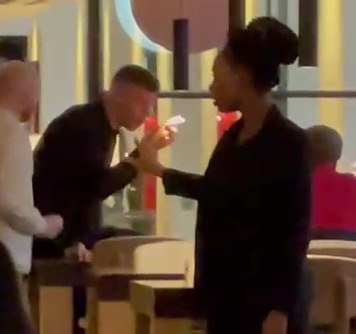 Some taxis then refused to take him because he was so pissed. It was embarrassing.

“It was shocking that a ­professional sportsman and England star could behave in this way in public. Young fans look up to players like him, and it’s really not on to behave in such a disgraceful way.”

Thursday evening’s scenes came less than 24 hours after he was an unused substitute in Villa’s 2-1 win at Tottenham. The ex-Everton star, who signed for the Blues for £15million in 2018, has 33 England caps.

Friends of the football player said he is ineligible to play in Sunday’s last game of the season due to the conditions of his loan deal agreed by Villa and Chelsea. 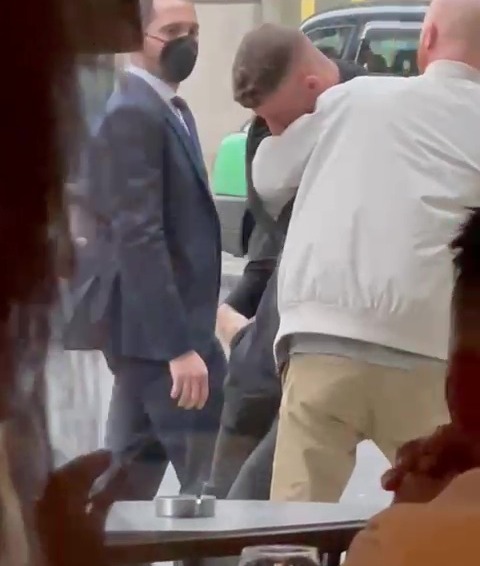 A few months ago, Aston Villa’s Jack Grealish and Ross Barkley broke strict coronavirus rules by having a day of partying with video footage showing the pair at a restaurant in London’s Mayfair.

The Sun, who have been slammed by fans online, report that they are seen in a crowded restaurant with other ‘partygoers’ who are in breach of the Tier 2 rule which states “you must not socialise with anyone you do not live with or who is not in your support bubble in any indoor setting, whether at home or in a public place”.

Witnesses saw their group downing champagne, vodka and beer at Bagatelle restaurant from around 3pm and into late evening.

One diner said: “You wouldn’t have thought there was a global health pandemic going on. They were arrogantly partying without a care.

In 2019, Ross Barkley was escorted to a cashpoint by police officers to pay for spilling chips in a row with a taxi driver.

The midfielder got mocked by passers-by who are said to have taunted Barkley after the millionaire player allegedly refused to settle the fare.

Police were called to the incident in Liverpool recently and tried to calm down the situation between the 25-year-old and the cab driver.

An eye-witness told the Mirror: “It was just after 11pm on Sunday night [29th Sept] and I was having a cigarette outside Hannah’s bar.

“I saw a taxi pull up and there was a row between the driver and the passenger who was Ross Barkley.

“It looked like Barkley had spilled his chips on the floor in the back of the cab.

“He was refusing to pick them up and then refusing to pay. He appeared to be very drunk and was unsteady on his feet.

“The driver must have called the police because two police cars pulled up.

“But eventually the officers then escorted him to a cashpoint down Hardman Street.

“He withdrew some money came back and handed it to the officers – they then gave it to the taxi driver and he just drove off.

“The chips had still not been picked up.”

@jhavfc: The Ross Barkley story is a sad one. I’ve said for a long time that he has bags of ability with feet, but does not have the mentality to match. I think he struggles to overcome his own doubts and frustrations. I hope he can get or be offered the help he clearly needs.

@Dpn76: From being the golden boy to treating your boyhood club badly then being just a normal player at Chelsea I think his confidence has broken so he struggles to overcome the dips footballers have He came here and was on fire until his injury Then only showed glimpses after

@Krispo1878: Almost like he’s a little dickhead isn’t it?

@RHAVFC: This doesn’t surprise me at all. People will blame the injury on his poor performances. But, I just think he couldn’t be bothered and happy to take the money. His attitude is terrible. He’ll be playing for a relegation battling Championship club soon.

@ChelsAVFC: What an absolute tool

@stevenchilwell: He comes back from loan and he starts trouble already Chelsea sell him now

@straightedgeze2: Seems we have a habit of taking washed up Chelsea players (Danny Drinkwater) who’s next 😂

@CS_UTV: Got a uphill battle to get his career on track it seems. Something not quite right.

@1874dan: cant stand this bloke im so glad he aint our problem anymore

@AvfcLuka: Feel bad for him man..I wish him the best for the rest of his career and hope we can see the player we all know he can be

@jutin__: I don’t get the hatred for this lad, he’s clearly got issues and needs either better guidance or better friends…. I hope he finds his way back from where he is, as somewhere inside there’s a talented lad…

@lukefrxst: Seems he has some issues going on behind closed doors which may have affected his form too, kinda feel for the bloke

@Lewis_1417: The guy is obviously troubled. I feel sorry for him and genuinely hope he gets his head sorted as he can be some player.

@Moorski7: I don’t think Ross is a bad lad he has had a disappointing second half of the season where injuries & lost form have obviously impacted on him, doesn’t excuse this type of behaviour though

@Chelseaista_cfc: This guy is always messing up.

@sparkym5: Ross needs his friends right now to stop him going off the rails not letting him get boozed up in public. He’s no longer a Villa Player and it hasn’t gone well for him for whatever reason, its a shame because he’s a talent when we puts his mind to it.

@ThatAnt___: Ross Barkley in being a drunk prick shocker… He’s been playing like he’s pissed for months so I’m not shocked and I’ve heard he’s fond of a drink. Get him away from us and Jack asap

@CFCLamps_: Hopefully he’ll get booted out of my club next

@JayVtid: Was he drunk on the pitch too? Couldn’t tell..

@rickyvillamad: Genuinely Hope Ross gets his career back on target, won’t be at Villa but wouldn’t write him off coz there’s a very good footballer there. Wish him all the best

@OJohnAttah: That time of the year has come. The Drinkwater effect…