A very worrying update emerges over Oldham’s troubling future as a football club in the ownership of Abdallah Lemsagam this week.

In the last week, we’ve seen three fans banned for expressing their dislike to the running of the club, but however there has been a sudden U-turn on that after Lemsagam had an interview with talkSPORT and gave them ‘one more chance’ or face a stadium ban.

Well now, the crisis-hit club sees another report come out, with claims that the owner rejected a proposal from English Football League for former Wigan Athletic chief Jonathan Jackson to sort out the League Two strugglers’ problems on and off field. 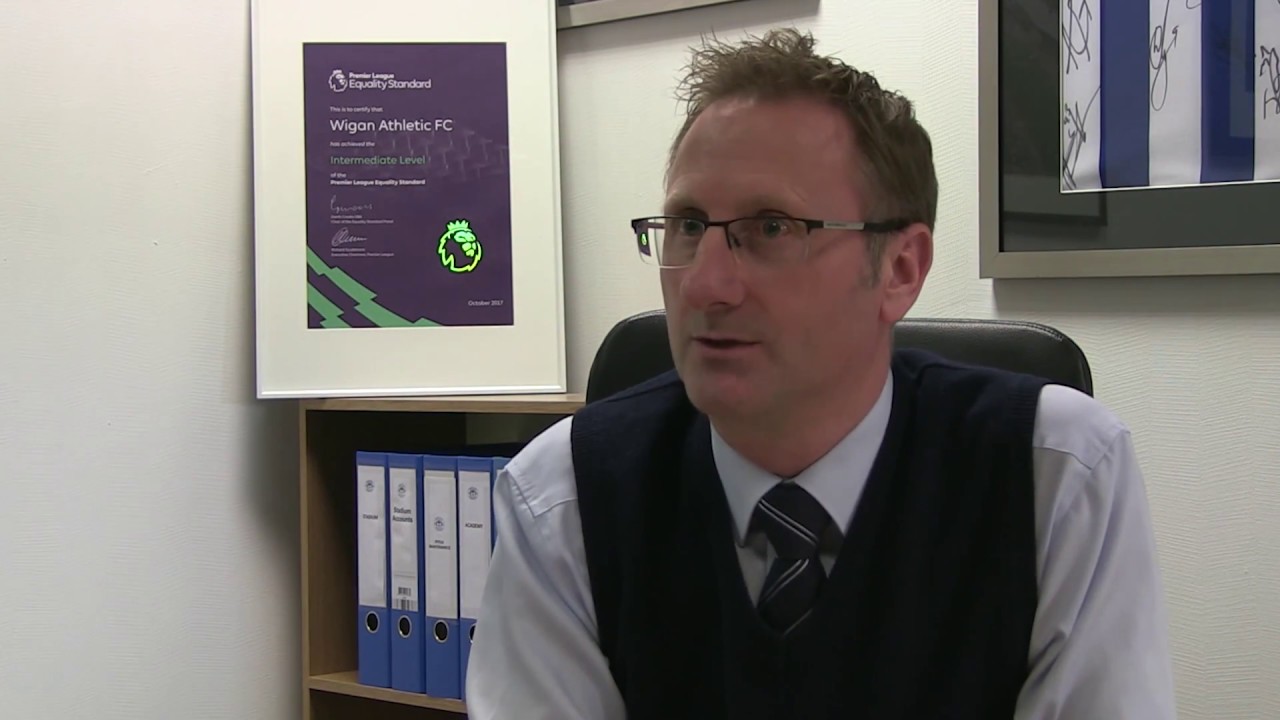 It got so grave that the EFL took the surprise step of offer the Latics the services of an experienced chief executive, according to Sportsmail.

In what is believed to be an unprecedented move, officials at the EFL contacted the beleaguered side to offer up Jonathan Jackson to solve numerous issues at Boundary Park.

However the club — who were once in the top flight but now currently second-bottom in the fourth tier under deeply unpopular owner Abdallah Lemsagam — dismissed the approach.

Dubai-based former agent Lemsagam and his brother, sporting director Mohamed, are largely to blame for Oldham’s struggles, seeing nine managerial changes and a huge turnover of players and staff since their 2018 takeover.

As mentioned, the club banned three fans for expressing their dislike for the ownership, but Lemsagam on Wednesday night, he offered to rescind the bans if the trio ‘apologise to everyone in the club’ and start ‘behaving like proper fans’.

Their latest statement on that matter read: “After receiving representations from the three fans in question, an appeal committee of the club has decided to rescind the ban on the three fans and replace it with a final written warning. Should any of the behaviour be repeated again, a banning order will be issued.”

Push the Boundary saw it, and hit back: “We have just read the statement from the club regarding the decision to rescind the 3 year bans handed out to 3 supporters. We are astounded by the lack of apology/ remorse towards the three lads involved and to then issue final written warnings would indicate that these supporters did something wrong which we all know is not the case, at best some of the hearsay evidence is purely slanderous without any facts to back it up. To be told that you can no longer attend your clubs matches based upon accusations of which no factual evidence can, or has been provided, is completely and utterly abhorrent and for that, the people involved in the original decision should be ashamed.

All the club has served to do in the last 4 days is truly cement in the minds, not only of Oldham Athletic fans, but of football fans up and down the country, what a laughing stock we are and highlight the sheer incompetence of the people that are in charge of running the club. You had a loyal, passionate fanbase at running the club. You had a loyal, passionate fanbase at your disposal, and you have seen fit to not only alienate them, but to actively turn against them and suggest that they have been involved in the decline of the football club both on and off the pitch. The mere suggestion of this reeks of a lack of self-awareness and unwillingness to stand by the action taken by the custodian and board in the last 3 and a half years.
Upon consultation with these supporters, we would like the following action to be confirmed at your earliest opportunity:

– That the data of the 3 fans involved has not indeed been passed to either football league clubs and/or GMP, as given the reasons behind the bans would be unlawful.

– Removal of the final written warning for these supporters. To issue this is to suggest they did anything wrong, and it is abundantly clear that this isn’t the case as the club have provided no factual evidence in support of these accusations and therefore we don’t see how any form of warning can be given?

– An apology to all 3 supporters in question, from a senior club official for the hurt and distress that has been caused. Arguably you have tarnished their reputation by merely issuing these bans in the first place and for that, they deserve an apology.

Finally, as a group, we would also like to reiterate our stance that Abdallah Lemsagam is not the man to take this club forward. He has shown time and time again a severe lack of business acumen and following this action, has completely alienated not only supporters of this club, but he has tarnished any future involvement in football in this country, because of his actions.

We request that the club is formally put up for sale and that Mr Lemsagam listens to his advisors and entertains serious offers for the football club, based upon it’s current league position, assets and reputational value, all of which have been negatively affected to the decision making of the chairman and the board in his time as custodian.

The conduct of the chairman live on national radio yesterday only serves to strengthen that view and as Trevor Sinclair mentioned afterwards “If I am an Oldham Athletic fan, I would be concerned about my clubs future”.

Well Mr Brown, we are Oldham Athletic fans and we are VERY worried about our clubs future.

We await your response.

Now there are serious concerns that Oldham are going in a similar direction to Bury with their very existence is under treat.

Those fears do not appear to have gone unnoticed by the EFL, who according to Sportsmail, declined to comment, is thought that the offer of Jackson was seen as one way of trying to ensure the 126-year-old club could survive.

The offer from the EFL is understood to have been made around two months ago.

Another fan boycott is planned for Oldham’s home fixture against Scunthorpe on Boxing Day, where defeat would see the club fall to the bottom of the Football League and fearing even more of relegation if even still around by the end of the season.

❌ Abdallah: “The fans banned deserve it!”

🔥 SJ: “You don’t run the club well, Oldham are bottom of the table & you don’t pay players on time.”

🤯 Abdallah: “Who pays the players? You?”

Oldham owner, Abdallah Lemsagam, on why he banned 3 fans. 👀 pic.twitter.com/o9ucAwFzdk

@Pandamonium1881: Once again a fans group comes up with a very well worded and fair statement that in footballing terms versus the clubs statement counts as an 8-0 drubbing

@bringbackngoo: Well written response guys. Judging by his time at Blackpool and here, Steve Brown does not care for a relationship with the fans, much like Abdallah showed on National radio yesterday. #oafc #LemsagamsOUT

@markt_john: Does anyone think there is something more sinister happening if they refuse help from the EFL. is there something bad they are trying to cover up? Money laundering? Can’t see any reason why they want the club.

@Mattbirtles78: EFL feeling guilty at letting him pass the fit and proper test?

@themantonhoward: Only consolation is that the @EFL are deeply concerned about us #oafc

@dan_snook: Even as someone who’s reasonably skilled with them, I’m running out of words that adequately describe this shower. Their behaviour is incredulous – choosing to sink without trace rather than accept help and admit their failings.

@caunce_owen: Getting prepared for admin

@midsblue1972: What’s the position with Blitz? If AL is in credit then what is ALs objective here? Can’t see a financial return. Only way out is admin or this implied buyer is a possibility?! Until then, we just keep adding the pressure #oafc

@Steve17249: Probably found out that he wasn’t free or part of the transfer embargo and would need be paid on time. #abdullahout #oafc

@gcw047: That speaks volumes about what everyone thinks of the EFL. If they are saying “no thanks” then that tells you everything you need to know.

@Deanrams_80sfan: something needs 2 be done to stop our clubs falling into the hands of guys who don’t give a sh*t. it’s the fans who suffer. we feel ur pain Oldham

@steshipman: Let’s just imagine for a second how bad your situation needs to be before the EFL start offering you employees. Yet still we turn it down. These Lemsagam boys, sweet Jesus #oafc

@BradleyKnowles1: When the EFL are offering help, you know you are in a serious position. #oafc

@_OASF: This is no surprise. Mr Lemsagam has frequently turned down offers of help and engagement with supporters groups, despite claiming he wanted engagement and clearly needs help. Unfortunately he doesn’t like being told views that differs with his or Mo’s regardless of fact #oafc

@Jay_whitehead87: Wonder why they wouldn’t want free help from the EFL. Surely they have nothing to hide?

@sleepysilvery: The EFL need to take action – there is enough information available about the way AL has run our club. If they don’t act then they are culpable too!

@nathanmilnes:
The narrow mindedness and arrogance to turn down assistance when clearly needed.
The mad thing is the fixes aren’t hard…
-engage with fans and listen
-improve the match day experience
-build a culture of positivity and growth in all staff beyond the playing staff.
#oafc