Tributes pour out as ex-England, Tottenham, Chelsea, West Ham player Jimmy Greaves dies aged 81, it has been confirmed on Sunday.

Greaves is Spurs’ record goalscorer having netted 266 times in 379 games for the Premier League club. His 37 league goals in the 1962/63 season remains a club record.

He was also a member of England’s World Cup-winning squad in 1966, and ended his international career with 44 goals in just 57 caps.

He passed away at home in the early hours of Sunday morning.

We are extremely saddened to learn of the passing of the great Jimmy Greaves, not just Tottenham Hotspur’s record goalscorer but the finest marksman this country has ever seen. Jimmy passed away at home in the early hours of this morning (Sunday 19 September), aged 81.

Throughout his wonderful playing career, Jimmy’s strike rate was phenomenal. His Spurs return was 266 goals in 379 appearances between 1961 and 1970 – 220 goals in 321 league games, 32 goals in 36 FA Cup ties, five in just eight League Cup ties and nine in 14 European matches.

We are extremely saddened to learn of the passing of the great Jimmy Greaves.

We extend our deepest sympathies to Jimmy’s family and friends at this sad time.

The 37 league goals that he netted in the 1962/63 season remains to this day our record by any player in a single season.

A member of England’s 1966 World Cup-winning squad, Jimmy also scored 44 goals in his 57 senior international appearances, with 42 of those caps – and 28 goals – won while a Spurs player.

Born in East Ham on 20 February, 1940, Jimmy’s career started in the junior ranks at Chelsea where he turned professional in May, 1957. He scored on his Blues debut – something which would become a familiar trait throughout his playing days – ironically against Spurs at White Hart Lane on 24 August, 1957, in a 1-1 draw.

He remained at Stamford Bridge until June, 1961, when he moved to AC Milan, and his 41-goal haul in the First Division in 1960/61 still stands as Chelsea’s record for a single season.

It was only a brief sojourn to Italy, however. Nine goals in 14 Serie A matches was an impressive return but he never really settled at Milan so Bill Nicholson moved swiftly to secure his services and he joined Spurs in December, 1961.

Although we had just won the ‘Double’, there’s no question that Jimmy’s arrival in N17 made us an even better team. He was a natural goalscorer, always in the right place at the right time to add the finishing touch to another well-worked move, while he could also create his own goals, as he did on numerous occasions by gliding past defenders and passing the ball into the back of the net. He possessed immaculate ball control, great balance and such composure in front of goal that he rarely spurned an opportunity. 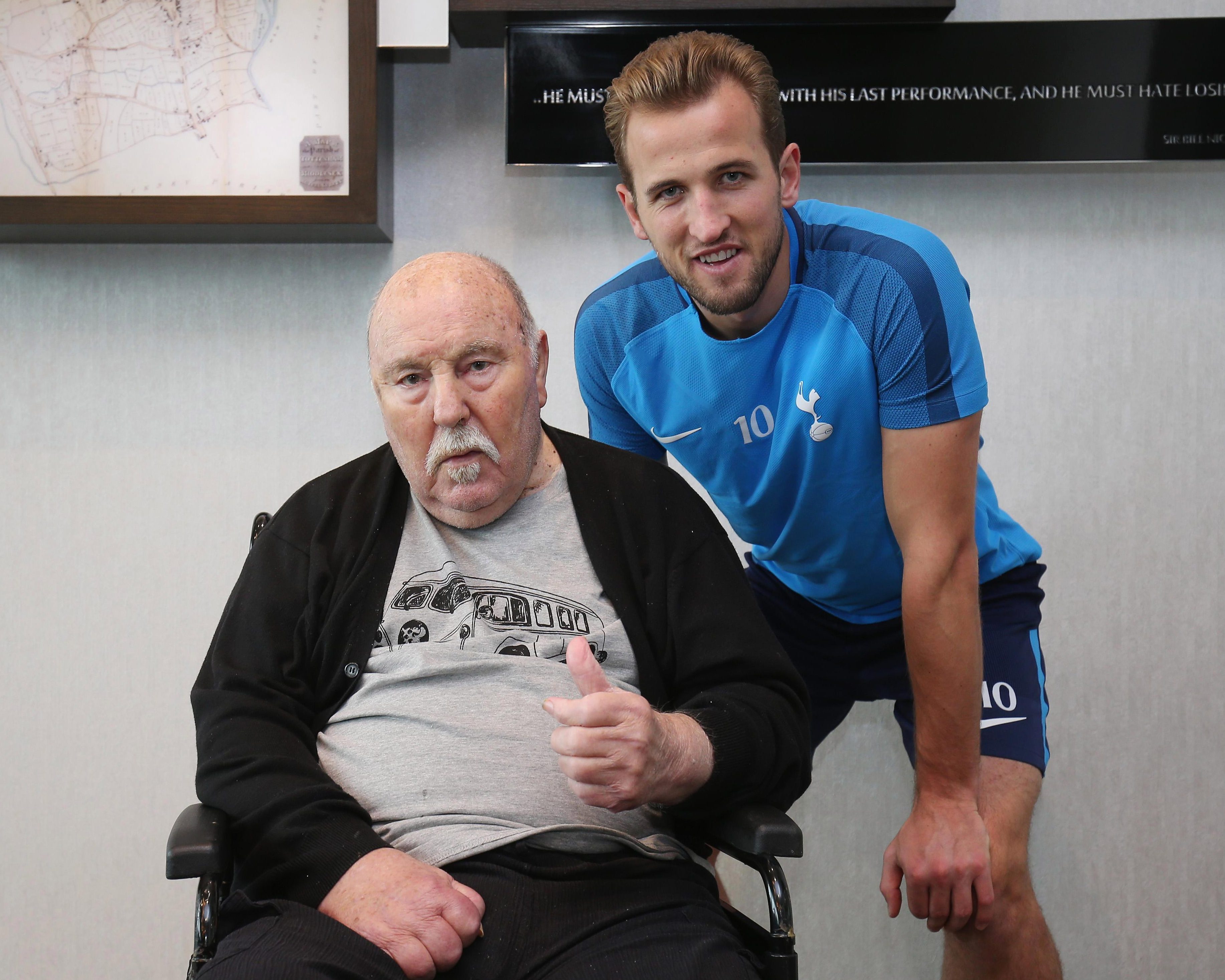 It was no surprise when he hit the target on his Tottenham debut against Blackpool on 16 December, 1961, scoring a hat-trick to give an indication of what was to follow during the course of the next nine years.

Within a few months of arriving at the Lane, Jimmy won his first senior medal as we retained the FA Cup, and he scored the opening goal in our 3-1 win over Burnley at Wembley. The following season, the goals flowed at an incredible rate. His brace in the European Cup Winners’ Cup Final helped us to a 5-1 demolition of Atletico Madrid, as we became the first British club to win a European trophy.

When Jimmy topped the First Division goalscoring charts in 1964/65 with 29 goals, he became the first player to do so in three consecutive seasons and he broke the 20 league goals barrier in three other campaigns for us. His final honour for us came in the 1967 FA Cup Final, playing his part in our 2-1 win over his former club Chelsea.

He was awarded an MBE in the Queen’s New Year Honours list at the end of 2020.

We extend our sincere condolences to his wife Irene, their four children, 10 grandchildren and great grandchildren.

Back in 2020, Ron ‘Chopper’ Harris, Rio Ferdinand, Peter Crouch and Eidur Gudjohnsen lauded the impact Jimmy Greaves had on the English game and his unbelievable goal record.

@mick_hynes: RIP to an absolute legend. If sky didn’t act like football only began in 92, everyone would be targeting his 357 top flight goals record, not shearers 260 (283 Inc div 1). Perspective and respect deserved.

@JonoFair: The greatest. We need a stand named after him and a statue outside the ground.

@richboydave: Really sad news, never saw Jimmy play live but my grandad would paint me wonderful pictures in my mind of Jimmy dribbling round the goalkeeper, when I saw the clips later on they were exactly as described. RIP Jimmy Greaves.

@stevejones777: The reason I followed Tottenham as a 8 year old was Jimmy Greaves, lived near him and he invited my son to play 9 holes of golf with him @ Warren GC he never knew it was him, he use to hold court with the old dears in the local post office, great player and gent, rest well mate.

@chgg61: Actually feels like losing someone in the family. Jimmy scored the first goal I ever saw live in the flesh, coincidentally against Chelsea. He is the only footballer I ever queued for to get a autograph. A true Legend.God bless you Jimmy Greaves.

@Jaydub77: My Dad’s hero. I briefly met him, twice in fact. Once as a kid stuck in traffic in London. The other at a random book signing so I got a signed copy 4 my Dad. From what I’ve seen and can tell, the greatest striker England has ever produced. And of course, a Spurs legend. RIP 🙏

@HotspurLane: My heart aches.. On the day we play Chelsea, very poignant. RIP to Jimmy and God Bless his family and loved ones. Let’s put on a spectacle in his honour today.. #COYS

@scottmcd83: If you want to know how good Jimmy greaves was this is what my dad said about him when I asked: when you was walking to the game you used to say how many will greaves score today not if he will score! A true club legend and probably the best player to ever play for us!

@277john: Watched him when I was a kid. He was the greatest ever.

One of the game’s most natural finishers and a remarkable man who gave so much to the game we all love.

Our thoughts at this time are with Jimmy’s loved ones, his friends and family and of course his colleagues at the clubs he played for.

A master marksman who illuminated English football.
The sympathies of everyone at Liverpool Football Club are with Jimmy’s family, friends, former clubs and team mates.

We are deeply saddened to learn of the passing of Jimmy Greaves at the age of 81.

Jimmy was part of our @FIFAWorldCup-winning squad and scored a remarkable 44 goals in 57 games for the #ThreeLions.

All of our thoughts are with his family, friends and former clubs. pic.twitter.com/CetXiwD25l

We are saddened to learn the news of the passing of Jimmy Greaves.

The Club sends its deepest condolences to Jimmy’s family and friends. pic.twitter.com/7VbZvbffCz

Incredible footballer and a big part of so many people’s lives.

Very sad to hear about his death. pic.twitter.com/xnefnn5EIC

VIDEO: Burnley and Arsenal fans fight each other following full time whistle
VIDEO: Fan gets sparked out as Newcastle and Leeds supporters clash in new footage