Tranmere Rovers fans have been left thrilled with a new manager appointed in the same week as their new home kit is revealed.

He was immediately the new favourite named to become their next boss – and he’s popular with fans having previously managed them.

Micky Mellon was the odds-on favourite to return to Prenton Park with his exit from Dundee United confirmed.

The Scottish boss moved north from the League Two side for his first football role in his homeland, replacing Robbie Neilson who joined Hearts after earning promotion with the Tangerines.

Tranmere Rovers FC are delighted to announce that Micky Mellon will re-join the Club as first team manager with effect from 1st June.

Tranmere Rovers FC are delighted to announce that Micky Mellon will re-join the Club as first team manager with effect from 1st June.

Ian Dawes will be Micky’s assistant manager and Andy Parkinson will act as first team coach.

Chairman Mark Palios said: “It is great to have Micky back at Prenton Park. We met up over the weekend to discuss matters and both felt it was a great fit for him to return, so we have moved swiftly to ensure that there is plenty of time to build a squad for the new season.

In Micky, we have a proven manager who already has a bond with the SWA, having guided us to back-to-back promotions from the National League to League One. I am very confident that with his knowledge and experience, and with Ian Dawes and Andy Parkinson alongside him, we will be making a strong push for promotion next season.”

New first team manager, Micky Mellon, said: “It is great to be back. When I went to Scotland following our demotion from League One, it left a sense of unfinished business and I am pleased to have the opportunity to right that wrong. Tranmere is a forward-thinking Club with an exciting future, and I wanted to be part of that, so I can’t wait to get started and be reunited with the SWA once again.”

Micky has signed up for the 2021/22 season, and now we need our 12th man at Prenton Park for the upcoming campaign! To purchase a season ticket, please CLICK HERE. 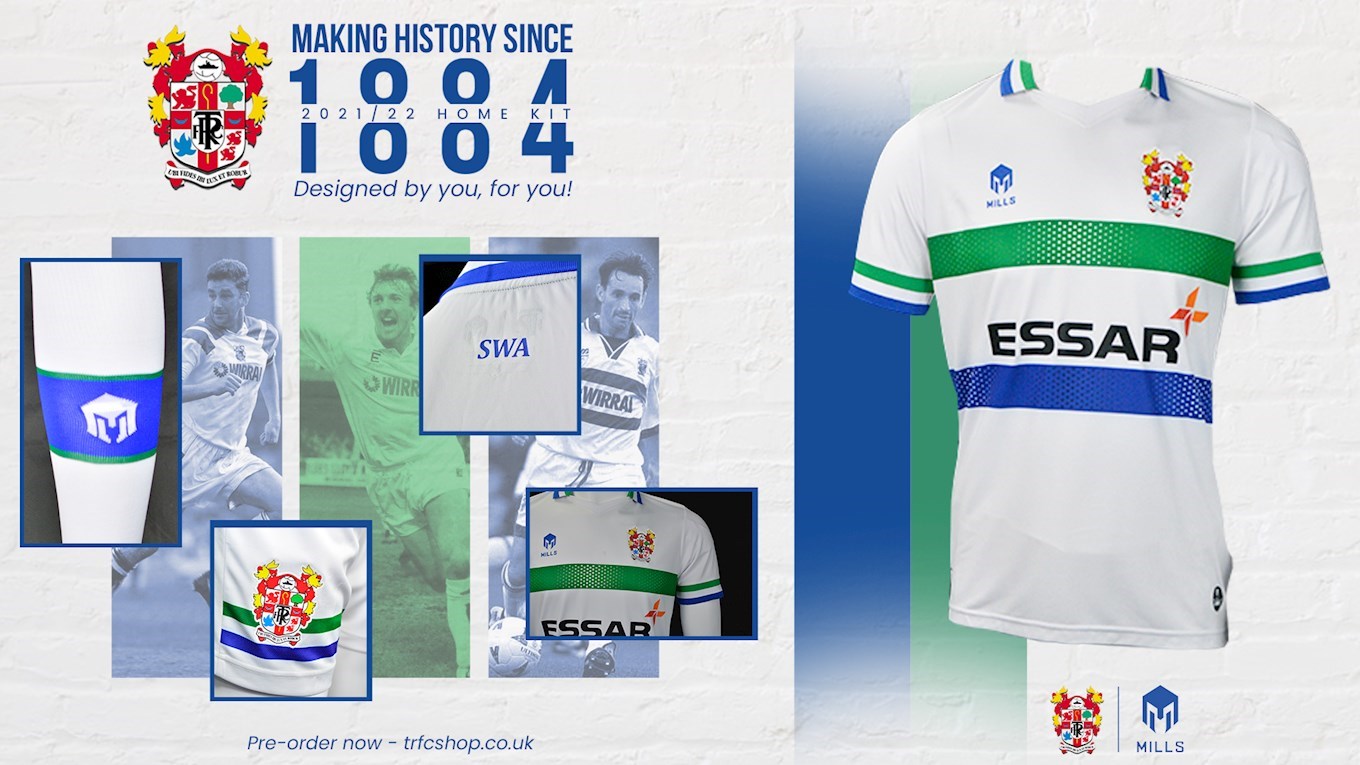 Designed and chosen by you, for you!

In what is believed to be a first for an English professional football club, in the summer of 2020 we launched a competition to let the Super White Army design their dream home kit, with the winning design being put into production for the new season.

Hundreds of fantastic entries were submitted for the competition, with four finalists selected, and those four designs being put to a fan vote. Today we are delighted to reveal the winning design, by Benjamin Longthorne. Well done Benjamin!

The kit has been manufactured by Indonesian based sports brand, Mills Sport, who also work with the Indonesian national team.  Their ability to produce a shirt to our exact specification rather than working with templates, was key to making the design competition work.

The official unveiling of the 2021/22 kit took place on Friday afternoon at Prenton Park, with Chairman Mark Palios and Vice Chair Nicola Palios, joined by Desra Percaya, the Ambassador Extraordinary and Plenipotentiary of the Republic of Indonesia to the United Kingdom and Mark Pennifold, Essar’s Chief People Officer.

The new 2021/22 home kit, designed by Tranmere fan Benjamin and chosen by the fans, is predominantly white, but reintroduces elements of blue and green.  The winning design is a throwback to one of our most popular kits used between 1995 and 1997.  A new look shirt collar and sleeve trims of white, blue and green are matched with one stripe of blue and green across the midriff on above and below the Essar logo.

We’ve also brought back the retro crest which is proudly displayed on the chest of the shirt, adjacent to the Mills Sport logo. The shirt has ‘SWA’ imprinted onto the back of neck, as a constant reminder of your loyal support.

The shorts remain in our traditional white colour with right leg having a trim of blue and green matched with the retro crest whilst the left side remains white with the Mills Sports Logo.

Again, the socks use the theme of white, blue and green. The majority being white with a blue band and green trim around the middle of the sock, displaying the Mills Sport logo.

Chairman Mark Palios said: “The reintroduction of the old crest is in part symbolic.  The blue and white crest was introduced as a cost saving measure when times were hard for the club, and we think that reverting back to the traditional multi-coloured badge is a sign of our renewed confidence for the future.  We are very honoured to have the Indonesian Ambassador here to launch the shirt today, alongside Mark Pennifold of Essar, whose support for the Club and its initiatives has been unwavering.”

Essar’s Chief People Officer, Pennifold, added: “This is the third year of the Essar sponsorship with Tranmere Rovers and we’re looking forward to it, hopefully it will be a successful year for the Club both on and off the pitch.

“Tranmere have always had a predominantly white kit which doesn’t leave much room for manoeuvre but I think they have done an excellent job in terms of the adding the colour to it.

“It is a great way to engage with the fans especially with Covid and not being able to have fans inside the ground. The fact that the Club have reached out to the fans and asked them for their views is great and hopefully this will be part of a successful season on the pitch but also a launch pad in terms of engagement with the fans”

The prices for the 2021/22 kit are set out below. Fans can pre-order their kits now by CLICKING HERE.  The kit is expected to be physically available for delivery/collection in early July.

As mentioned, Tranmere fans were left thrilled with a new manager appointed and new kit revealed…

@herby994: Absolutely over the moon if any fan is actually annoyed with this appointment get a grip there wasn’t a better option available to take club forward absolute legend of the club only way is up now

@davo0709: Very good appointment this. Knows the club very well and understands the ethos of what we are all about. I was more worried about him coming back and then god forbid it doesn’t work out and then everything he did previously kinda goes down the drain

@LukeyRoberts: Just want a hug from him me

@WillCharlton13: NOW GET NORS BACK

@MarkStubbs99: Time for a Bobby Ewing moment. You’ve just woken up after a great dream about Connor scoring at Wembley and a nightmare about PPG and losing to Morecambe. We’ve just been promoted from the National League, Micky will take us straight up to League One. Enjoy the summer everyone.

@dp1414: Welcome back Micky now let’s all get together an get the hell out of this league #swa #trfc

@M_Olver: YESSSSSSSS!!!!! What a cracking announcement!!

@CThomse: Not happy he left United; 10 months is no time to put your stamp on a team, but chuffed he’s going back to where he is valued. Would have been a positive summer looking ahead to the new season. All the best to him; will be following Tranmere’s progress with interest.

@Wirral_white: Hope he doesn’t spend half summer looking away applying for jobs again if we go up. Glad he’s back though safe pair of hands, always dubious about second spells but he gets us and nobody else out there. Already a legend if he can pull it off again then he’s on for a lounge ha

@davetaylor1982: Good to see Mellon back, now we need a squad to get us promoted automatically

@UnevenStephenx: As a Dundee United fan I wish him all the best. Did a good job for us by keeping us up.

@Nevinlegend: No copy and past puma kit for us! Up the Unique Rovers! #SWA

@SwaEast: We approve. Especially of the green and blue stripes that represent the #fens

@ste_on_politics: I think I may have to buy that shirt. Best home shirt I’ve seen