The SPFL (Scottish Professional Football League) have been mocked by fans as new league sponsor for all four divisions is revealed.

The Scottish Premiership, Championship and Leagues One and Two have been without a company’s backing since the Ladbrokes deal expired at the end of the 2019-20 season.

League chief executive Neil Doncaster has since announced the new name which is being hailed as the “largest ever” in the history of the divisions.

In August 2019, bookmaker Ladbrokes announced that they wouldn’t be renewing their deal beyond the end of the season and fans were critical that the league lacked the backing of a company.

The same situation also arose when Clydesdale Bank ceased their support in 2012.

The SPFL is delighted to announce cinch as new title sponsor

A five year deal with @cinchuk, the UK’s fastest-growing online used car marketplace, will see support for all four divisions until season 2025/26.

The Scottish Professional Football League (SPFL) today announced cinch, the UK’s fastest-growing online used car marketplace, as its new title sponsor in a five-year deal that will run until the 2025/26 season.

The long-term agreement, which will span all four divisions, represents the largest title sponsorship deal in the SPFL’s history.

With immediate effect, Scotland’s professional football leagues will be known as the cinch Premiership, cinch Championship, cinch League 1 and cinch League 2. cinch will also become the League’s Official Car Partner, with the company’s logo incorporated into the League’s composite logo which appears on every player’s sleeve.

This significant investment in the SPFL by cinch builds on an impressive roster of high-profile sponsorship deals with some of the country’s best-loved sports brands, including the ECB, as Principal Partner of England Cricket; Tottenham Hotspur, the LTA for the cinch Championships; the Northampton Saints and The British Motor Show.

SPFL chief executive, Neil Doncaster, said: “This is an enormously significant partnership for our member clubs, and for Scottish football as a whole. Our discussions with cinch have been extremely positive and the duration of the sponsorship agreement demonstrates their long-term commitment to Scottish football.

“Despite the economic situation and the challenging nature of the global sponsorship industry generally, this is the largest-ever sponsorship in the SPFL era. It’s a ringing endorsement of the enduring popularity of Scottish football, not only north of the border but right around the world.

“It’s an exciting time for the Scottish game and I look forward to building on this new partnership as we continue to showcase Scottish football and maximise its exposure to a global audience.”

Robert Bridge, cinch Chief Customer Officer, said: “We are delighted to support the SPFL and welcome them to our high-profile family of sports sponsorships. It’s another great win for cinch that will play such an important role in putting us and our customers at the centre of some fantastic sporting moments.

“Scottish football has a UK audience of over 20 million but more importantly, it is the heartbeat of the Scottish community. As football fans make a return to stadiums for the new season cinch looks forward to being there alongside them for all those celebratory moments we’ve missed so much as we continue to make buying a car as faff-free as possible across Scotland and the UK.”

cinch takes the faff out of finding, buying and owning a used car. It has quickly established itself as a leader for online used car search and purchases in the UK. It’s faff-free commitment to customers puts Britain back in the driving seat, with quality checked used cars delivered direct to the buyer’s door wherever they are across mainland UK, and a 14-day money-back guarantee.

Constellation Automotive Group, which also owns WeBuyAnyCar and BCA, recently raised over £1bn to turbocharge cinch’s growth across the UK and Europe. 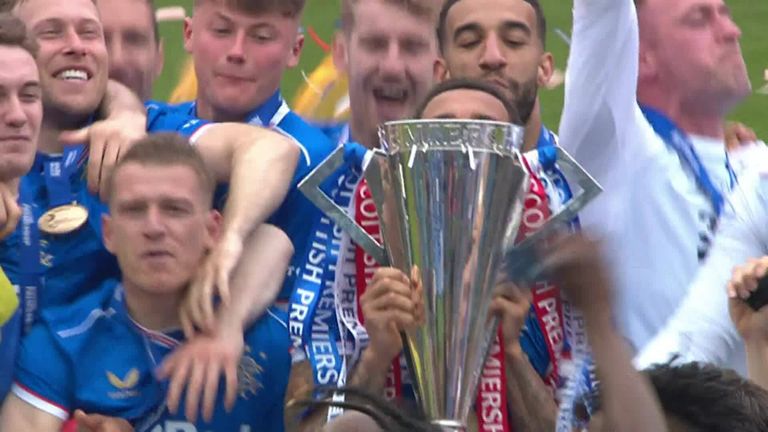 As mentioned, the SPFL mocked has been by fans as the new league sponsor for all four divisions is revealed, others meanwhile had something else to say…

@strypeyblue: @Rylan see you at Ibrox for trophy day!

@IainWATP: Scenes when Rylan turns up to present the trophies.

@TartanSheep83: Better than Glen’s vodka, that’s about all I can say

@IntoTheValley68: No wonder other countries see us as tinpot

@TFIO_WDTGH: Is this to honour how easy Rangers are going to have domestic football for the next 5 years!??

@GR_BEAR1979: Fuck me !!! The Cinch Scottish premier league, that’s a bawhair away from the “tunnocks caramel wafer challenge cup”

@ChrisMcL16: FS a company with a twitter following of less than 2k

@turps100: I can’t believe Cinch want involved with one of the most corrupt organisations in the country.

@RoboDFC: Should have asked big Arnold Clark instead of a tinpot company like cinch

@Ml19dy76: With the people running the SPFL it’s only suitable I guess that they opted for their own kind in a bunch of used car sales persons.

@davidkerr1970: Does this mean Rylan hands the trophy over?

@theobanjambo: Rylan the new face of Scottish football!! It’ll certainly give him something to get his teeth into……

@TommyMassie_: Bought a car through them literally last week, if that doesn’t mean Aberdeen are winning the league next season I don’t know what to tell ya

@_JMoar: If this doesn’t lead to Rylan presenting the Scottish Premiership trophy like Howard from the bank adverts used to do back in the day, I will be extremely disappointed.

@DanSmith85: Rylan Clark driving onto the pitch in an old Vauxhall Corsa to present the winners of each league with the trophy.

@GlenCameron16: No wonder people down south laugh at us what the actual fuck is this

@lockdoonlockin: Massive marketing own goal here when they are trying to associate a ‘Premier’ product with second hand brand.

@CallumMcClung: Scottish football really is a joke, canny wait to see Rylan hand over the trophy to Tav next season

@ginger_stevo: I love Scottish fitbaw – where else could you be sponsored by a used car salesman and act like it’s a good thing 🤣 Of all the world renowned organisations that began in Scotland and you can’t even sign up one 🤣🤣

@alanmonolith: Yassss rylan finally to replace the star power of Howard from the Halifax

@morralexand: Hard act to follow, as Howard came in a two-for deal with that blonde lassie from the Bank of Scotland.

This is the news the entire country has been waiting for pic.twitter.com/CoqeOczmoD

Not any worse than “Howard from the Halifax ” giving Rangers the trophy I suppose pic.twitter.com/n4bKFX6CPk

They are embarrassed that’s why .

Aw ffs. We are going to have Rylan Clark hand us title 56 next May. https://t.co/r7ZDLeOvVq pic.twitter.com/SdQvbV4I08