Salford City have been getting savagely mocked on social media with stadium swap plans being revealed and seem to be near a conclusion.

Rugby outfit Salford Red Devils have confirmed they are involved in ‘positive discussions’ over a potential stadium swap with the EFL League Two club.

It emerged on Friday that CosCos, the joint venture that owns the AJ Bell Stadium formed by Salford Council and Peel holdings, is in discussions to sell up.

The deal would see the Ammies move in to join Sale Sharks, and the Salford Red Devils relocated to the football team’s Moor Land ground, Peninsula Stadium in Kersal.

The Red Devils management issued a statement to reassure fans they are looking for the ‘best possible outcome’ for the club.

“We are currently actively engaged in positive discussions with all parties in the reported ‘stadium swap’ agreement, and we continue to strive towards the best possible outcome for Salford Red Devils,” the statement said.

The Red Devils have confirmed they are involved in ‘positive discussions’ over a potential stadium swap with Salford City FC.

It emerged on Friday that CosCos, the joint venture that owns the AJ Bell stadium formed by Salford Council and Peel holdings, is in discussions to sell up.

The deal would see Salford City FC move in to join Sale Sharks, and the Red Devils relocated to the football team’s Moor Land ground, Peninsula Stadium in Kersal.

Last night, the Red Devils management issued a statement to reassure fans they are looking for the ‘best possible outcome’ for the club.

“We are currently actively engaged in positive discussions with all parties in the reported ‘stadium swap’ agreement, and we continue to strive towards the best possible outcome for Salford Red Devils,” the statement said.

“Regarding our reported move to the Peninsula Stadium at Moor Lane, whilst we understand positive progress has been made between Salford City Football Club and Salford City Council, we are still yet to undertake any due diligence on the stadium.

“The conversations continue to develop at pace, however the Club recognises the need to conduct a considered evaluation of any alternative options to our tenancy at the AJ Bell Stadium, which is still contracted until the end of 2023.

“We will be hosting a fans forum on Thursday 4 th November to provide a further update on circumstances as they currently stand and anticipate that there may be further updates to provide by this date.

“Full details of the fans forum will be released in the coming week and we look forward to seeing as many fans in attendance as possible regarding what is an important process and topic in the Club’s history.”

The Manchester Evening News reported in April this year that Sharks had made a “serious” offer to buy the AJ Bell.

The move triggered controversy with Reds fans dismayed at the proposal.

The 12,000 capacity ground next to the M60 at Barton is currently jointly owned by Salford council and property and land giant Peel. 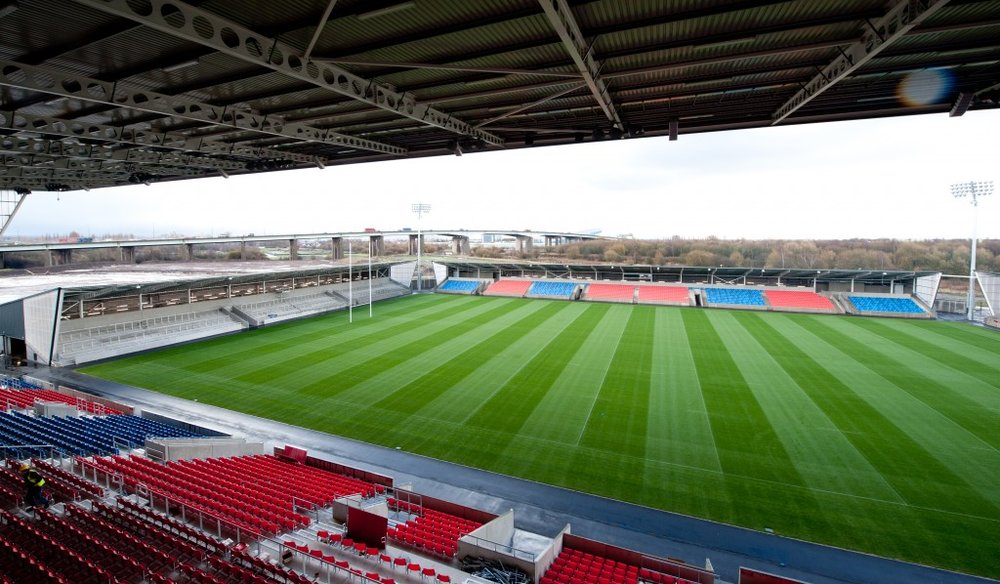 Salford City FC are currently in the lower half of English football’s fourth tier. Promotion would certainly increase the need for a larger ground than their existing 5,000 capacity home.

Sale have played at the AJ Bell since 2012 and announced in 2018 that they would move grounds if the owners would not sell.

In September last year, controversial plans to build a massive new stadium and sports village in Trafford for the Sharks were dropped after the council said it would not support them following a public outcry.

Proposals for the Crossford Bridge playing fields development included investment of around £100m before they were dropped.

The union side played at Heywood Road in Sale between 1905 and 2003, before moving to Edgeley Park, home of Stockport County, and then the AJ Bell stadium.

In a statement issued on Friday Salford council said: “We are issuing this statement to update people on the current situation. We understand fans of the clubs want to be informed as this progresses.

“Discussions are at an advanced stage and ongoing between all four parties in matters relating to the AJ Bell Stadium and Peninsula Stadium at Moor Lane.

“These discussions are also following the usual legal procedures and due diligence that will require formal approval by all parties.”

“It is important to note that the expectation is we will secure a future for all three clubs in the city. We are proud to have them based in the city and we also need to consider the future of all sporting clubs in Salford. “Subject to Salford FC and Sale Sharks buying the stadium from CosCos (the stadium company) they would both be based at the AJ Bell stadium with Salford Red Devils moving to the Peninsula Stadium at Moor Lane under a lease arrangement from the council, if such a move is approved by the Salford Red Devils Board and members.

“A lot of work remains to be undertaken and we will say more as matters are progressed. We want to get to the point where all parties are happy that the desired outcomes are achievable and formal approvals will then be sought.

“We will update as further information becomes available.”

The move would mean Salford Red Devils returning to a more central location in the city.

Their previous home before moving to the AJ Bell was in Weaste at The Willows ground, which was demolished to make way for new homes.

In April, the Red Devils said they were considering making their own bid for the AJ Bell.

Salford City were taken over in 2014 by ex-Manchester United players, Nicky Butt, Ryan Giggs, Phil and Gary Neville, and Paul Scholes who each owned ten per cent of the club. David Beckham acquired a ten per cent share too in 2019 – the yer they were promoted to the Football League.

As mentioned, Salford City have been savagely mocked with their stadium swap plans revealed…

fred_mitchy1874: Swear they’re getting less than 2K through the doors

archie_drake07_: Only have it so that more away fans come

hartlepool.globe: Can’t even fill the peninsula so I don’t think they will fill this

harvburrows: the peninsula is a proper shithole to be fair

harvzhope: They need a newen it’s literally made of tin

eflcmemes: build a new stadium to move out only a few years later?

scott.holmes6: They wouldn’t be able to fill that. Salford can’t even fill out their current stadium

nrobinson_19: And they would STILL be quiet 😂

fraz_blair_: Shame, it was a small ground, but a nice one nonetheless

@JoeStephenson96: Sounds like nobody is happy with this, funny

@nxck_whxte: Ah yes, average attendance of 3.5k in a 5k stadium, so why not purchase an 11.5k stadium? Geniuses

@fcislocheng: I can’t see anyone actually being happy with this outcome. Salford City fans were adamant they don’t want to go to AJ, Salford is nowhere near Sale, and the Peninsula Stadium is stuck together with duct tape. #Salford

@STFCchaz: So salford can’t even fill 5k but there moving to an 12k stadium 🤦🤦

@CamDonDuncan: 3-5k at this stadium will be way better than at the AJ Bell.

With recent news coming out that the Ammies could be swapping with the Salford Red Devils’ place at the AJ Bell Stadium, it may not be a #EFL ground for much longer… pic.twitter.com/tD3k4bvslh

New buyer found for Bury FC and Gigg Lane – what happens next?
Antoni Sarcevic breaks silence after bust up leads to him leaving Bolton for Stockport