REVEALED: Leigh Griffiths’ flirty messages sent to 15 year old as she speaks out

Leigh Griffiths’ flirty messages sent to 15 year old have been outed as she speaks out with more details on the exchange between them both.

The player was sent home from Celtic’s pre-season camp with Griffiths being looked into as cops begin an investigation into his online activity.

Griffiths did not feature in Ange Postecoglou’s first friendly as manager with Celtic beating Sheffield Wednesday 3-1 in Newport on Wednesday.

A Police Scotland spokesman said: “We have been made aware of social media content. We are making inquiries and assessing for criminality.”

A Celtic spokesperson told several media outlets: “We have been made aware of online comments concerning Leigh Griffiths. The club will now look into this matter carefully. Leigh has left the training camp as we do this. It would not be appropriate to make any further comment at this time.”

A Hoops fan said her hero did not ask her age after contacting her online.

It came after details of the pair’s Instagram chats went viral. In one, unmarried Griffiths, 30, called the teen “ya cutie”. He also sent her a camera emoji.

She replied: “What do you mean? x”

Griffiths, who won the League One title with Wolves a good few years back, then said: “Have a think to it n get back to me x.”

After the comments were shared, the girl wrote: “I did reply because I’m a Celtic fan. I felt privileged he had messaged me.

“My age was never mentioned. In no way does this make it right. I feel sorry for his wife and children.” 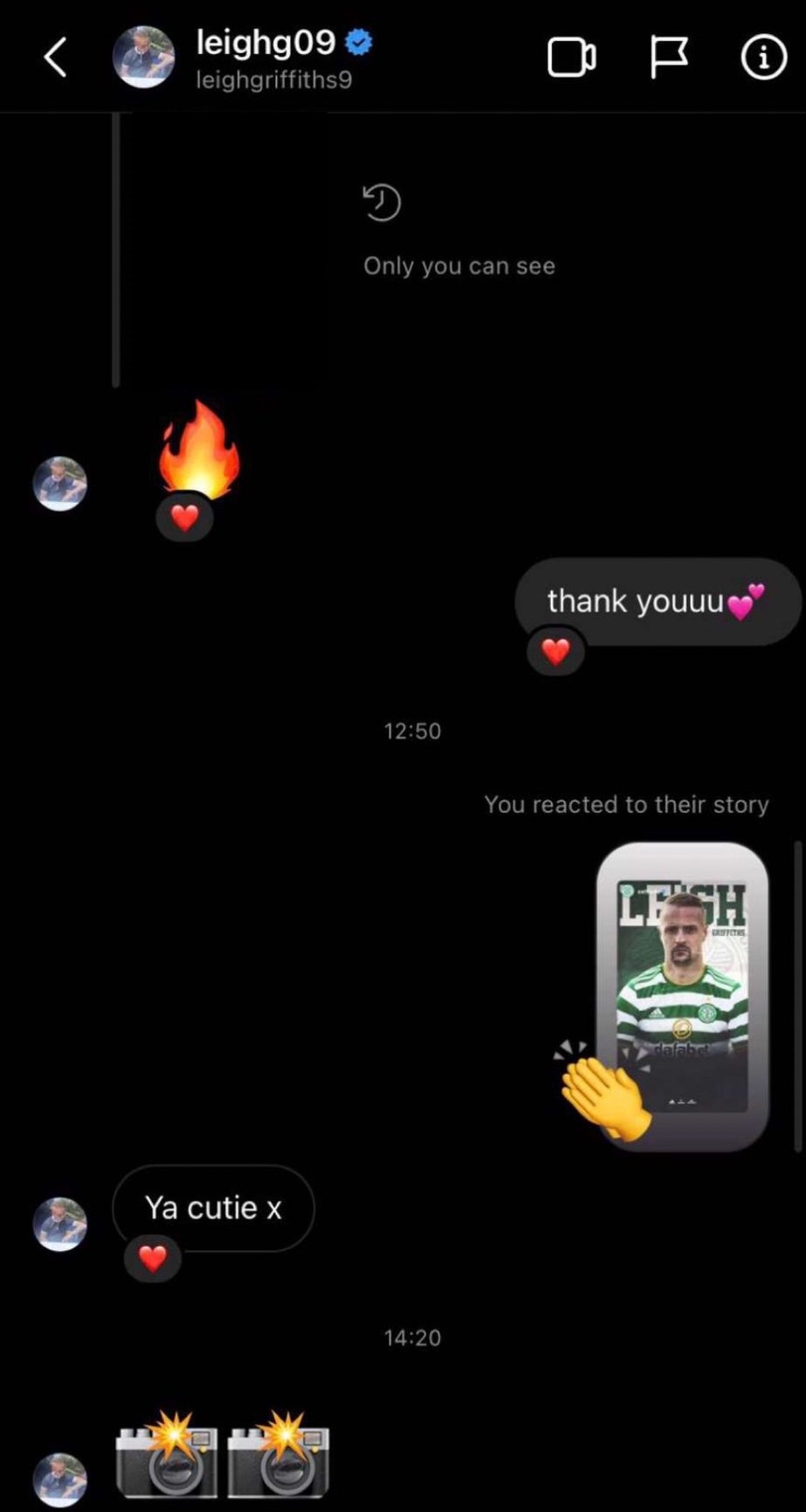 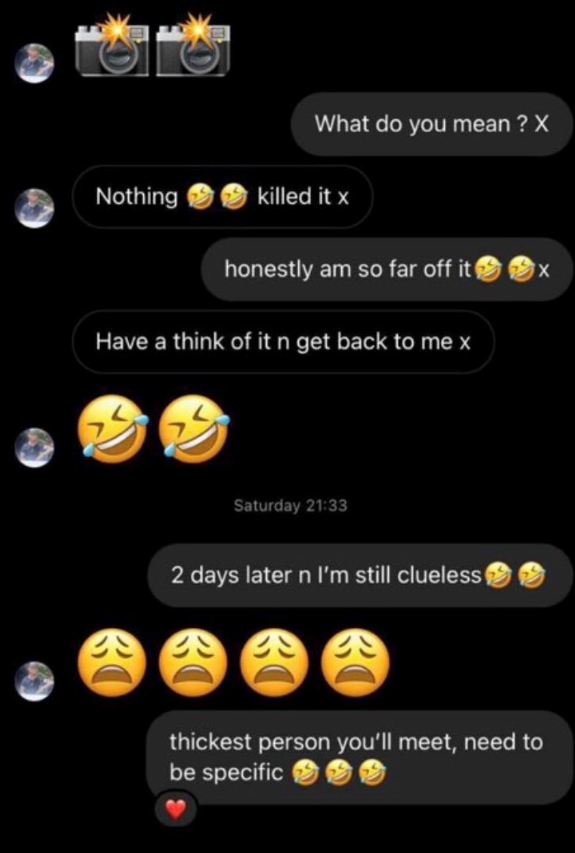 Last night, the girl wrote on Instagram: “I’m sure a lot of you have seen what’s going on, Leigh Griffiths didn’t ask my age, therefore he wasn’t capable of knowing.

“In no way does this make it right, but anyway Hail Hail.

“No way am I sticking up for him I genuinely feel sorry for his wife and children.

“And yes I did reply because I’m a Celtic fan Obviously I felt privileged that he had messaged me my age was never mentioned and I’m sure if he knew he wouldn’t have replied.” 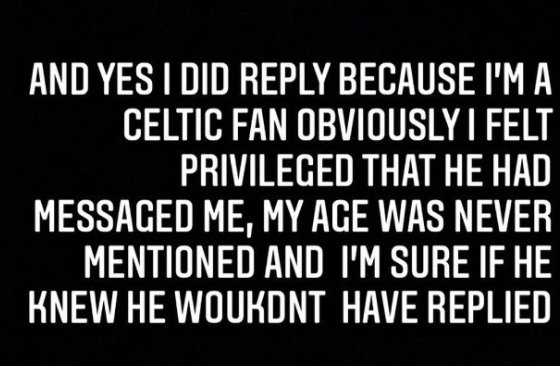 Celtic took up a one-year option on the 30-year-old striker’s contract last week after his future had been in doubt.

The Scottish Premiership club said: “Celtic Football Club is pleased to announce it has agreed a one-year contract extension with striker Leigh Griffiths.

Leigh said: “I am delighted to extend my time at the Club. Celtic is a club I love and want to do all I can to play my part again in bringing success to our supporters.

“I’m looking forward to the season ahead and working with the new gaffer and the rest of the lads. It is an exciting time for the Club and I wanted to be part of the Club’s future. I’ll be doing everything I can to help us get back to where we all want to be.”

Celtic manager Ange Postecoglou added: “I am really pleased to keep Leigh with us for another season at least. I have had very positive conversations with Leigh and he clearly understands my expectations and more importantly the club’s.

“Leigh has already proven himself as one of the top strikers in Scotland and I look forward to working with him so that we can bring success to Celtic Football Club.”

@_Scott_Dempsey_: Shocking news, hope the search is properly done. Saddens me cause he’s one of my favourite strikers at the club, well has been since he arrived at Celtic. The point scoring in a serious situation like this is embarrassing. If it’s true, proper action needs to be taken.

@Kylehilton1989: More celtic fans outraged about a woman no touching the green part of a scarf than they are about this is all you need to know about them

@RobJ93: Queue the hordes of adults coming to point score over one of the most repugnant crimes imaginable, leave the ‘he did it first’ nonsense at the door, surely to christ condemning this behaviour and kicking these individuals out of our game is one thing we should all be behind?

@RangersBear_55: Should be an easy investigation. Did he send inappropriate messages to an under age girl? Yes. Is this a criminal act? Yes. Job done. Welcome.

@GarM44505994: Not the first time sure he deleted his social media account back in 2012 over similar allegations

@lnheritant: 25 goals this season? More like 25 months behind bars.

@mztty: Wow, Wank at football and a nonce

@sabre1873: If true, then his career is over. If not, get it cleared up as quickly as possible so he’s not ruined.

@jbhoymolloy: Why doesn’t Leigh Griffiths stay off social media, he clearly hasn’t the intelligence to use it. He’s so bloody boring now. He’s been riding on the coattails of that phenomenal scoring season under Ronnie.

@Inmemoryofthet1: IF these allegations around Leigh Griffiths are correct, can someone get him away from our club. Sick to the back teeth of reading about players behaviour. I’ve no patience for this shite anymore.

@M6WEGAN: See if your defending Leigh Griffiths actions yer part of a bigger problem. Absolute weirdos for the watching

@jay_wxm91: Surely Leigh Griffiths gets full on binned after all this now the soft twat, one chance too far this one he’s got huge problems that lad

The SNPs reaction to the Leigh Griffiths investigation… pic.twitter.com/p0I4v7m4mH