Manchester United interim manager Ralf Rangnick has been criticised by fans over his cup changes proposal to Prem and EFL clubs.

Despite not managing a single game in the Carabao Cup competition, Rangnick suggests that it should be scrapped to ease fixture congestion in English football.

Every year, the festive schedule comes under huge pressure, with the impact of the Omicron variant of Covid sweeping through dressing rooms and forcing postponements throughout the country. 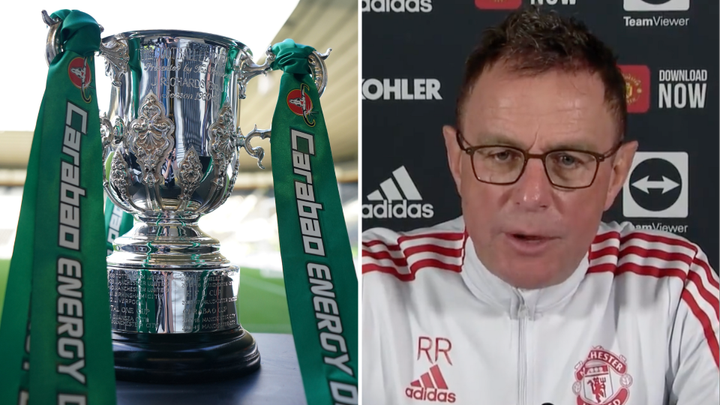 Man Utd, themselves, have not played since the 11th of December due to their own outbreak and have seen Premier League games against Brentford and Brighton postponed.

Speaking ahead of Monday’s game at Newcastle, he wants top-flight clubs to be left out of the League Cup – describing the competition as a vessel for lower league teams to make some extra money.

The German tactician also claimed that FA Cup replays be scrapped permanently – rather than just for the season to ease the busy, Covid-affected schedule.

Rangnick claimed: “England is the only top league that plays two cup competitions.

“This is something we could speak about and discuss.

“The League Cup is still kept for the third and fourth division teams to improve the financial situations of those clubs.

“But in a tight calendar with too many games, this is something to speak and discuss.”

Rangnick continued: “The other thing is the FA Cup and the replays… that’s been changed and that’s a good thing.

“In other countries you never have replays, those are topics we could speak about.”

How arrogant are these people managing the top clubs?

Who do they think they are? https://t.co/6j8Sh6hTTU

Pep Guardiola and Jurgen Klopp have also recently slammed the schedule, urging for the Premier league to have another look and make it easier for teams.

Two meetings took place on Thursday – one with Premier League coaches, the other with captains and senior players.

Player welfare and the fixture list were among big concerns, along with protocol for postponing fixtures with Man City boss Pep Guardiola raising the possibility of players striking.

He said: “Should the players and the managers be all together and make a strike, or something, because just through words it’s not going to be solved?

“I don’t think [there will be a strike] because we want to play, we want to continue, to make the people happy going to the stadium on the 26th, 27th, 29th, 31st and 1st [January], and play games because we love to do that.

As mentioned, Ralf Rangnick was criticised by fans over his cup changes proposal to Prem and EFL clubs…

@TomiyasuShogun: The Carabao Cup exists so teams from lower leagues can hopefully get drawn against the big PL teams and get a nice revenue boost. It’s part of our ‘anyone can make it’ football culture and it’s not for people who know nothing about it to change.

@hasmancan18: Geezer ain’t even in the league cup why is he talking

@AlexIngles88: Only been here 5 minutes and has the audacity to question the domestic cup competitions? Ridiculous.

@Kennisco407: The oldest league structure and established cup comps, the most supported league world wide, players and managers can’t wait to get here to sample English football and take the massive pay on offer, then do nothing but moan about our cup comps, Xmas games, too intense!!

@jamescrockart: Really disappoints me that new managers do not respect domestic cup competitions. These cups do so much good for the lower league clubs and create amazing memories for fans. Loved going to stamford bridge 2 years ago, we lost 7-1 but what a night

@CFCAaron__: He’s been here 2 weeks and he wants to get rid of a whole tournament? I thought Klopp was bad…

@wayneleedsfan: Been here 5 mins and already wants to scrap a cup that’s been going 60 years. Jog on.

@MikeJabBCFC: Someone tell him that football exists in this country outside the prem & that only have to look at the clubs/attendances in the 3rd/4the division to know why. Bigger games at that level than most country’s 2nd & even 1st

@MRMAXBRADLEY_: As a Birmingham city fan who still has great memories of winning the league cup vs Arsenal 10 years ago, followed by playing in Europe the season after, this guy can kindly do one 👍

@goonerszn5321: If you don’t like it then don’t manage in England LOOL. Simple as that.

@TurkishGooner: Who’s he think he is, just got here and he’s questioning the importance of the Carabao Cup, I bet he wouldn’t be talking if Utd were actually in it, what nonsense

@Brottonred: Don’t enter then but don’t come in and try and change an institution that we’re proud of, you will be long gone while clubs who care passionately ie not the rich try there best to give their fans a trophy

@AllThingsWBAFC: Football exists outside the prem ralph. These cup competitions are part of our footballing culture from non-league to the prem. They were here long before all of us and should be here long after.

@fc_abbeyrangers: Jesus!! At least Klopp gave it a year!!

@BhoyinRed: Except England isn’t the only country that plays two domestic cup competitions 😂

@freddiebonfa: This man’s been here two days and is already winging about a competition which gives smaller teams in lower leagues the chance to compete against the top clubs. Obvs doesn’t understand what it means to the fans. Great start

@JordanDelurey: He’s managed 2 games in the league and had 2 or 3 week break and he starts tryna tell people what to do hahaha