It was the Premier League Final Day with the last round of games to be played – who qualifies for Europe? That was all to be decided.

Going into them, we knew that Chelsea, Liverpool and Leicester were separated by one point in pursuit of final two Champions League spots.

Chelsea would be guaranteed third with a win over Aston Villa, Liverpool and Leicester level on points but the Reds have a superior goal difference.

One of those sides plus West Ham, Tottenham and Everton would be in Europa League contention.

Arsenal and mathematically Leeds (although unlikely) could also get a European Conference League spot while Man City would lift their fifth Premier League title and saying goodbye to Sergio Aguero.

Right then, so let’s explain how the day played out…

On the 13th minute, Kevin de Bruyne curled it beautifully into the bottom right corner from just outside the box. It’s a beauty!

They lead Everton 1-0, who are after a Europa League spot but are at the time likely to miss out.

You don’t let Kevin De Bruyne shoot from there! 🇧🇪 He slots past Pickford from outside the box.

Man Utd’s Anthony Elanga has missed a good couple of early opportunities but made no mistake with by putting his side ahead against Wolves as he grabs his first Premier League goal for the club.

Dan James did well to stay onside and got away down the left before delivering a perfect cross that Elanga powered home.

It was raining goals in Manchester. Everton lost the ball on the halfway line and soon regretted it. Kevin de Bruyne threaded a pass through to the galloping Gabriel Jesus, who turned Ben Godfrey inside the area and coolly fired home. A superb finish, but a gift from the visitors.

Rodrigo headed in his fourth goal in four games to put Leeds one up against West Brom, arriving unmarked at the back post to meet Raphinha’s corner. Leeds were all over the visitors.

Joe Willock scored for the seventh successive game and it was a beauty.

On the 24th minute, he picked it up inside his own half and went forward, leaving Fulham defenders trailing. Tim Ream briefly held him up in the area but the ball bounced kindly and Willock reacted quick to slam it past Marek Rodak.

Shortly after, David McGoldrick was afforded so much space in the Burnley half that he virtually had his own postcode.

He needed no second invitation to curl a beauty into the bottom corner from 25 yards. 1-0 to the Blades. 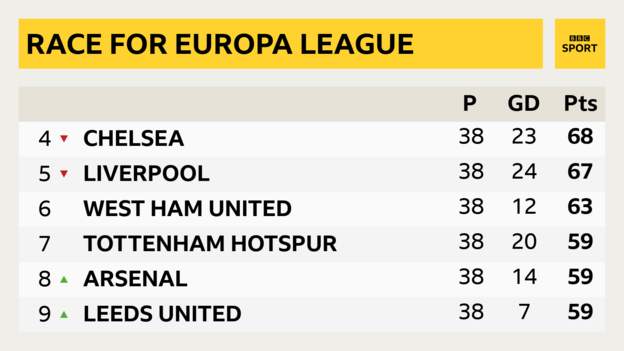 A big goal was scored for West Ham which puts them in the Europa League as long as they can hold on.

Michail Antonio flicked on a header and it comes over to Pablo Fornals on the far side of the box.

He smasheed it into the net, with Kyle Walker-Peters unable to block it. Fornals raced off to celebrate in front of the fans.

Pablo Fornals then doubled the Hammers’ lead to put the in the driving seat.

Vladimir Coufal’s low cross from the right was hit first time by Pablo Fornals and he thumped it in. His second in three minutes.

Whilst Sadio Mane put Liverpool 1-0 up against Crystal Palace, Everton had a penalty awarded to them, before Ederson stepped up and save Sigurdsson’s effort. Man City still 2-0 up.

Wolves got themselves an equaliser against Manchester United, Nelson Semedo getting one back on the 39th minute.

A complete turnaround at the King Power Stadium before half time, within the space of a few minutes and it was not good news for Leicester’s Champions League hopes.

Son Heung-min’s cross looped up in the box and Harry Kane was in the right place at the right time to smash home on – possibly – his farewell Tottenham appearance. Hard to believe.

The goal rush continued before the break, Kalvin Phillips doubled Leeds’ lead against West Brom, and Aston Villa made it 1-0 thanks to Bertrand Traore against Chelsea.

Juan Mata scored from the penalty spot to give Manchester United the lead at Molineux on the verge of half time. Quite a lengthy VAR decision before awarding.

HALF TIME | STATE OF PLAY

LEICESTER FIFTH AS IT STANDS

After the restart, Arsenal put together a sweeping move which resulted in Calum Chambers hitting it hard and low into the box.

Nicolas Pepe took the sting out of it with his left foot then slammed it right-footed past Robert Sanchez. That’s his 15th goal of the season. 1-0 Gunners.

Then Leicester had another penalty. It was Davinson Sanchez who pulled back Jamie Vardy inside the box. The ex-non league player then stepped up and scored, 2-1 Foxes.

Cool as you like, Anwar El Ghazi managed to score his penalty and Chelsea are in HUGE trouble. Aston Villa 2-0 on the 59th minute.

Man City made it 3-0 against Everton. He had gone close moments earlier when he had a shot deflected narrowly wide but there was no denying Phil Foden this time. He converted with a cool finish into the bottom corner after Gabriel Jesus and Raheem Sterling combined in the box.

Whilst all of that was going on, Nicolas Pepe made it 2-0 to Arsenal.

On the 60th minute, Timo Werner had the ball in the back of the net for Chelsea…but it was disallowed for offside. Eek.

The Blues did however get one back on the 70th minute, Ben Chilwell striking lucky. Villa still 2-1 up.

At the same time, Sergio Aguero managed to make it 4-0 to Man City, they were smashing it at this point.

Drama at the King Power, Kasper Schmeichel scored an own goal to made it 1-1, a huge boost for Tottenham.

Kasper Schmeichel punches the ball in to his own net, which sends Leicester City out of the top 4!

Sadio Mane made it 2-0 against Crystal Palace on the 77th minute whilst Man City made it 5-0, a second for Sergio Aguero.

West Ham come breath a sigh of relief after the Saints had one ruled out entering the last 10 minutes.

Leicester were almost buried after Harry Kane chipped the ball into the box and Nampalys Mendy scrambled back to divert the ball a whisker wide of his own goal.

The Champions League dream is over for Leicester…again as Gareth Bale scored on the 89th minute, which in turn puts Tottenham into the Europa Conference League and knocks Arsenal out.

Harry Kane did brilliantly to go round Kasper Schmeichel and keep the ball alive, pulling the ball back for sub Bale to slot in from the edge of the area.

VAR has a check for a possible Kane handball but the goal stood.

Brendan Rodgers chomps his chewing gum furiously on the touchline, you have to feel for his side.

Right on full time, Fabian Schar scored on the spot to make to 2-0 to Newcastle against Fulham.

Hal Robson-Kanu got one back for West Brom, losing 3-1 at Leeds.

Spurs got themselves a fourth, again thanks to Gareth Bale, Europe confirmed for them!

Leicester miss out. They are in the Europa League, alongside West Ham.

Tottenham will be in the Europa Conference League. Arsenal and Everton miss out full stop.

West Ham secured their best league finish in 22 years and qualified for the Europa League as this 3-0 win over Southampton secured a sixth-placed finish. pic.twitter.com/JLSrODDtEJ