A Plymouth fan’s vile tweet which was sent to a Swansea player earlier this week has been quickly taken down by social media site Twitter.

Goalscorer Morgan Whittaker pointed out the racist abuse after the Swans came out 4-1 winners over the League One side in the Carabao Cup on Tuesday night.

Swansea City have condemned the abuse while also thanking both the English Football League and Twitter for their swift action with the disgusting post quickly deleted. 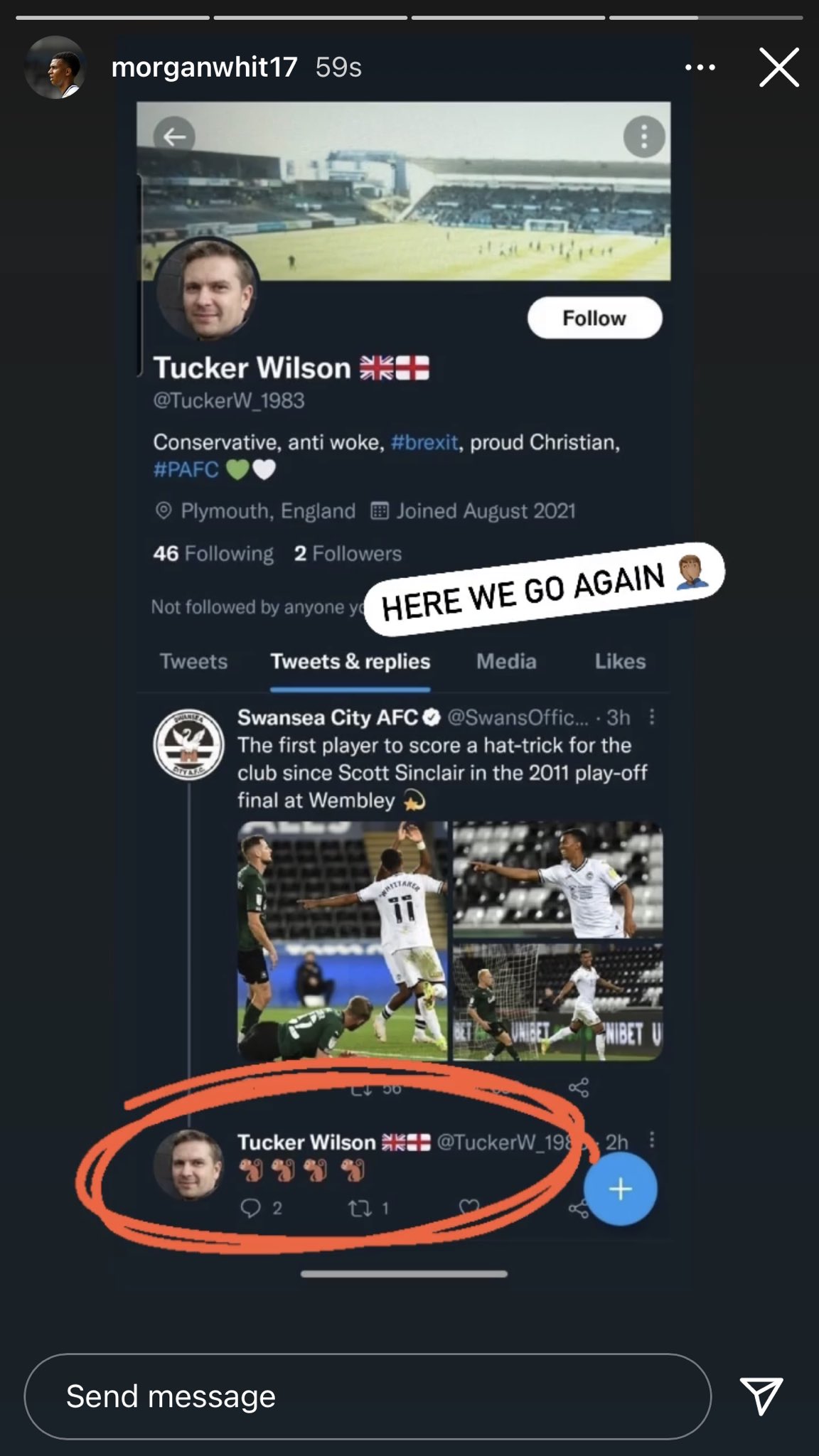 It is the latest instance of a Swansea player being subjected to racism, with the likes of Yan Dhanda, Ben Cabango and Jamal Lowe also targeted with abuse in the first half of 2021, while at the end of last season it was revealed Morgan Whittaker had also been racially abused online like his fellow team-mates.

“Swansea City is aware of an alleged racist tweet in response to a post on our social media channels following last night’s Carabao Cup win over Plymouth Argyle,” an official club statement read.

“We have reported the tweet to Twitter and the EFL. As a result, the account has been suspended while the tweet has been deleted. We thank both organisations for the swift action taken to address this issue.

“The player targeted by the poster has been informed, while he continues to receive our unwavering support. However, we remain hugely concerned by the fact that racist posts continue to be aired on social media platforms.

“Once again, we reiterate our own strong stance on this matter, and condemn racism and abuse of all kinds because it has no place within football and wider society.”

Plymouth Argyle have also released a statement condemning the behaviour of “an individual claiming to support Argyle”.

It read: “The club has been made aware of an alleged racist tweet sent from an individual claiming to support Argyle following last night’s Carabao Cup fixture at the Swansea.com Stadium.

“We condemn this behaviour in the strongest possible terms, and underline our commitment to eradicating discrimination of all forms. There is no place for it at Home Park, in football, or society.

“The club will work with the relevant authorities to ensure that the individual is identified, and appropriate action is taken.”

Morgan Whittaker scored a late second-half hat-trick as Swansea City overcame Plymouth to reach the third round of the EFL Cup.

The Pilgrims hit back in the second half as substitute Rhys Shirley volleyed in.

Whittaker restored his side’s lead with a fine low strike and scored a second after Jamal Lowe’s superb run before adding a third with a neat finish.

@PureGonzo_ (to Plymouth): You should make a statement addressing the idiots that boo at the start of every game. If you’re not against racism, you’re for it.

@GabrielRea7: Hopefully the person is banned for life

@SarahLooker4: Let’s hope the individual is identified and punished appropriately.

@YT_MaxTigerHD: This should not be tolerated at any club and the individual who tweeted the comment is a disgrace and should be suspended for at least 2 months as this is unacceptable especially after what happened at the end of the Euros

@GaryBow34347497: I am sickened by this vile individual being associated with Argyle. When identified they should be banned from our great football club for life.

@hpc0409: Totally brain dead, when will these idiots learn…. ban them

@grrooves: What is the matter with these morons?

@JohnYatesSoccer: Good on #PAFC here. Disgraceful conduct of some fans.

@scfcelis: Absolutely disgusting whatever it is and I hope the player affected is ok 👍

@lcht1996: Enough is enough. What the fuck is wrong with people.

@hywelpugh: What is wrong with people? It’s not cool, it’s not clever and frankly completely unacceptable! However, I’m glad to see a such a swift response.

@ForeverAYellow: What a real shame this is, how can anyone stoop so low. I know we don’t live in a perfect world, but I just don’t understand why anyone would go to the lengths to create what looks to be a fake account or whatever to then go in with the intent to hurt the feelings of a Swansea player because he scored goals against your own team. Is it even that deep? Your team lost, move on. Finally, well done Twitter getting on this so fast, actually rather impressed you’ve done something to tackle racism for once.