Nottingham Forest secure the appointment of their new manager with details revealed over the deal between Steve Cooper and his new club.

The 41-year-old took training on Tuesday morning after Forest agreed compensation (£500,000) with his former club Swansea late last week because Cooper was still technically contracted to the Welsh outfit.

He left the Liberty Stadium as head coach in July after leading them to the Championship playoffs, and previously to that, Cooper guided England to the U17 World Cup in 2017.

He will also be bringing Alan Tate and Steve Rands as part of his new-look backroom staff. 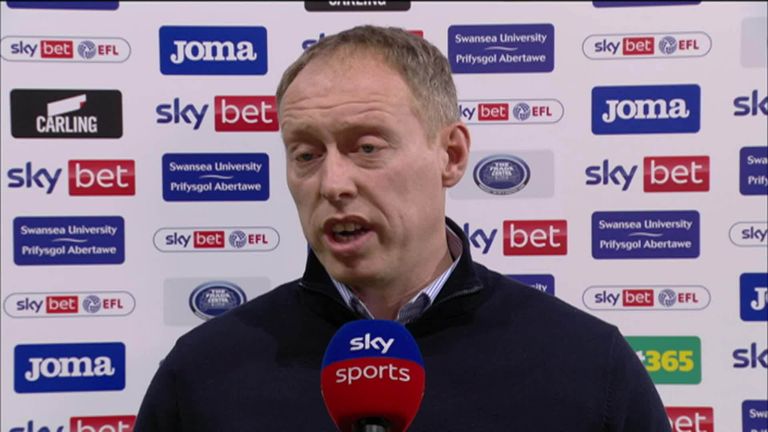 He was immediately identified as CEO Dane Murphy’s number one target following the sacking of Chris Hughton following a dismal run or results.

Forest have started the Championship campaign with one draw and six defeats. After Hughton departed, the managerless club claimed their first league win of the season with a 2-0 victory at Huddersfield.

With interim head coach Steven Reid overseeing the weekend’s game, a first-half strike from Lewis Grabban and an own goal by Lee Nicholls just after half time saw Forest earn three points.

It was also the first time they have scored more than one goal in a league game since April.

Forest have become known for frequently changing their manager, with the club having sacked one manager every calendar year since 2011.

However, pundit Chris Sutton has slammed the Nottingham Forest players after the managerial departure.

“Shame on the players, is what I’ll say,” he said on BT Sport Score.

“Just blaming Chris Hughton for everything and, oh the players [were great] this afternoon.

“It’s the same group of players who have played the same opening six games and been woeful and now they’re putting in a performance when Steven Reid is in charge.

“I mean, come on, they should have been doing that earlier on this season.”

@Jakeoliver1865: WE HAVE A MANAGER HORRAYYY. WE MAY HAVE UGLY BASTARD BUT HOPEFULLY HE GETS US OUT OFF THIS SHIT. “DERBY GOING DOWN WITH A FIVER IN THE BANK “

@AlexLatham39094: Really like that #NFFC have appointed such a young manager, who’s got a good track record. Cooper led Swansea to back-to-back play off finishes, whilst on a restricted budget and working with young players. Forest need to given him time, but that’s hard to come by these days.

@1matthewburgess: Steve Cooper to Nottingham Forest then. Much like his time at Swansea, he’ll be working with constraints to rebuild the club amidst deeper rooted problems that his predecessors have struggled to overcome. Good luck to him! #NFFC

@Tommyblx: We’re about to appoint a World Cup winning manager, whose only two seasons in the Championship have ended in the Playoffs. Sacked in September then. #NFFC

@peterbouncyball: I can see 2 headlines 10-years from now: “Steve Cooper talks about the last 10-years as Forest Manager & the journey getting them back to Champion League football” or “Non-league Nottingham Forest are now looking for their 736th manager after the sacking of unknown Billy Bollox”.

@trickytree52: Good luck Steve. You might just need it

@RLB90B: Interesting Steve Cooper to Nottingham Forest 👀 Being tipped with Premier clubs back end of last season. The football world is a merry go round.

@Bvsnffcsg01: Possibly the best target we could’ve got, I preferred wilder but with his success with the England youth and our young squad and his champ experience, I guess it makes most sense! Hopefully it’s the correct one!

@ENG2Stars1Day: Time for all #nffc fans to get behind Cooper. We have endured a torrid time of late with too many managerial changes. This appointment has a greater chance of working out if we all get fully behind the new man from the very beginning. COYR!

@peoffrey: Pleased to see Steve Cooper back in work. He looked jaded after the play off final. Good appointment for Forest.

@talkforesttv: It will be a interesting to see how long this forest broad will give Steve cooper with how the managerial circus it became #nffc

@JordanNFFC: Now let’s back him, I hope people don’t call him after couple games as gonna take time but I’m confident this gonna be good in the long run Steve Cooper Red & White army

@TrevChapmanNFFC: Looking forward to seeing what he can do, Welcome to the club Steve Cooper 🔴⚪️

@KevWatson10: Fantastic news. We are lucky to have him at the CG.

@Jcov1998: Another chapter.. this is where it really starts for Dane Murphy, his choice, and if it doesn’t go well I’m sure he’ll feel those above breathing down his neck. Let’s all get behind him and hope this is the one that ends 20+ years of failure… #NFFC

@ReissNFFC: I couldn’t give a toss what Swansea fans say about Cooper, stats on paper look good hence why Dane Murphy is going for him. He’ll know the fans won’t want shit football so time to get behind him, give him a chance & trust the process. Looking forward to Millwall #NFFC

@Hawks8920: For the first time in a long time im genuinely excited about the appointment of Cooper. Swans have always played good football, good experience with youth and at this level too. This season is written off for sure but i actually think this one could be the one