Newcastle United reportedly line up a new boss with a Steve Bruce exit ‘around the corner’ as he responds to chants on Saturday.

The Magpies are said to be considering a move for former player turned manager Gennaro Gattuso if they get rid of their current boss, according to reports in Italy.

Newcastle are currently position above the relegation zone after gaining three points from their opening six matches of the Premier League season.

Bruce’s side were held to a 1-1 draw with newly-promoted Watford on Saturday as his side continue to look for their first win of the campaign.

And now Italian website Calciomercato claims that Bruce’s sacking is ‘around the corner’ at the North East outfit and that ‘Gattuso is on the bench’ after the club were said to have been interested in him during the summer.

He is a World Cup winner as a player, and has managed two of the biggest clubs in Italy in the form of Serie A giants AC Milan and Napoli.

He left his role in Naples at the end of the 2021/22 season after failing to qualify for the Champions League – but was heavily linked with Premier League side Tottenham Hotspur a few months back, and seemingly came close to getting the role.

Calciomercato add that he is ‘among the names screened by Newcastle’ with Bruce likely to be on his way out of the club soon.

With this, and their poor in mind, William Hill have now installed Newcastle’s Steve Bruce as the new favourite to be the first Premier League manager to leave.

The report states that Gattuso is on ‘pre-alert’ over the potential appointment with the report claiming that the 2nd of October – when Newcastle travel to Wolves – is a key date for Bruce’s future at the club.

It is understood that if Newcastle are defeated by Wolves then the hierarchy ‘could opt for the change of the bench thus taking advantage of the two-week break for the national teams’.

Speaking in July, Gattuso claimed that “keyboard hatred” cost him a chance at the Tottenham job before Spurs appointed Nuno Espirito Santo. 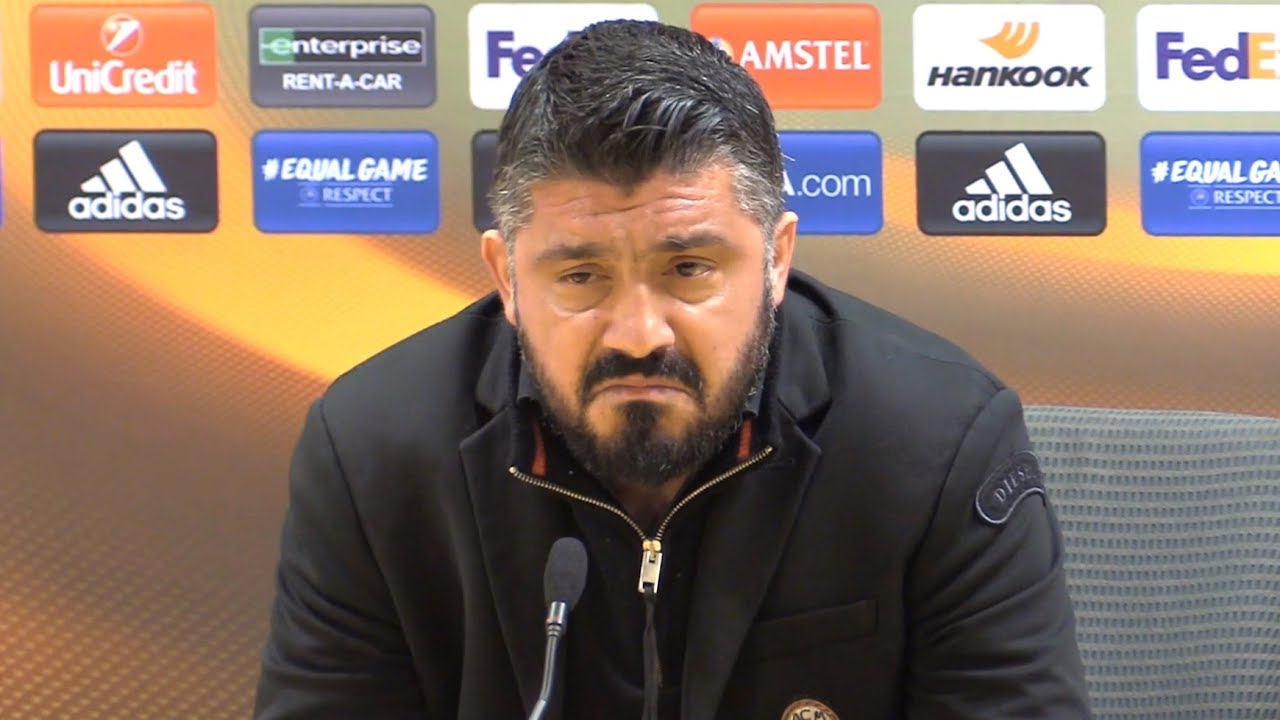 “I find it hard to think that this was the reason for my failure to move to Tottenham. At the limit, their fans may have been left with the image of my fight with Jordan in 2011, who was their assistant manager at the time,” Gattuso said.

“Me racist, sexist and homophobic? That’s not true, ask my former teammates. Only some of my statements have been misrepresented.

“My story teaches that keyboard hatred is something dangerous and underestimated. I am a public figure and I have the strength to react, but there are many other people who may not succeed and maybe throw themselves out of the window out of weakness.”

Steve Bruce insists Newcastle ARE making progress this season – despite sitting just above the relegation zone with three points from a possible 18 this term.

Bruce said on the ‘Bruce Out chants’: “It’s difficult – but that’s all it is, noise.

“I’m just going to get one with my job. Try to do the job as best I can.

“We have the makings of a half-decent team. We have half a dozen missing.

“I can see us progressing, where others can’t but certainly I can.”

Bruce said: “We should have won the game comprehensively.

“But we haven’t and that’s the story of us so far. So we have to keep bashing away and working hard.”

Bruce did not hold back on his assessment of the finishing either.

Bruce added: “At this level with the quality of the players we’ve got, you’ve got to be taking them.

“We were sloppy on too many occasions.

“It’s the hardest part of the game is to score a goal, it’s mentality.

@LukeEdwardsTele has moved quick to allegedly rule this out, yet some Newcastle fans have their suspicions, as he is accused of tweeting often to talk up Steve Bruce and the job he’s doing. Let the speculation continue.

Bruce is turning #NUFC into Norwich wake up. pic.twitter.com/t1ZWgZzLjy

@DayleBarron: You said we’d definitely be taken over by Christmas (last year) what happened with that one? Or was it just linked to Mauriss & his people living in a fantasy world? (Genuine question not a dig)

@ForeverAYellow: Luke spouts so much shite. I love how he acts like he was quick to get inside info from the club, yet it’s probably all bullshit. Just look at how much he’s been called out for spreading lies in the past. I’d say the sacking article is more legit to Luke bigging up Bruce.

@neilwatson69: Do you really think fans believe anything you say – unless you have access to Ashley it’s a load of bollocks as only he knows what’s gonna happen – still trying to stay relevant though

@alex_cookson: If Bruce bent over naked in front you what would touch his arsehole first, your tongue or your penis?

@hardy27: His job is safe? Umh he’s going to be a big gutted then isn’t he as he is wanting to be sacked, he doesn’t want the job anymore but won’t walk away. Absolute mess we are in players want out manager wants our owner wants out.

@allyandthecavs: The team has won 7 out of 35 games, Luke. Honestly, who on Earth cares about entertainment right now? We’re going down, and hacks like you are giddy about it because your pal keeps his job.

@allman85: The view is wrong. Southampton battered us and Leeds had a stone wall penalty turned down. He’s a shit manager and nothing you say is going to change that

@ChipperfieldNot: Luke Edwards Still Being A Bellend And Goading Newcastle Fans I See, Glad I Am Blocked, Bloke Is A Tit #NUFC

@xocnaheel: Let’s be honest luke Edwards contact is Steve bruce. What ever he is reporting is from Steve. There will always be positive steve bruce reports from him. #nufc

@LeLouvre: Here he is wheeling out the club line…..there is nothing to see here. You idiot fans know nothing, me, Lee and The Steves know best. #ShameOnLuke #Propaganda

@DobbySolanoNUFC: This HAS to be the season we go down

@ASmithSJ: The team isn’t “more entertaining to watch than previous years” at all. Entertaining for the neutral maybe because the defence is a shambles, but going forward it is a case of get the ball to ASM and hope he can do something. #NUFC

@wantabiggerboat: Reliably informed 😂😂 his mate promising him a Chinese all he can eat buffet for lunch for “scoops” with a dig at Rafa for being more entertaining to boot. Fucking pathetic.

@MagpieMockery: When have the #nufc hierarchy ever been interested in the football being more entertaining? This such an odd claim.

@MastrContender: At least it would be fun again

@neymates: Watford’s the only game we deserved more… we got what we deserved in others. The football, even though it’s improved, isn’t anything to write home about, but it’s about more than that for me. I wanted to get behind Bruce, but he’s made it impossible. He’s done that. Nobody else.

@stevebush1: If this is the case Luke it’s concerning that the club are prepared in my view to gamble further. Let’s hope we don’t get to a busted flush situation.

@Denster85: Let’s face it, if he survived that awful run last season he will be here for a while longer yet regardless of points on the board.

@nicholasnufc1: We’re only entertaining to watch as we concede too many goals. This team has conceded the most goals in the premiership since footy restarted after lockdown. If the players are happy with that it’s no wonder we don’t win many games

@GallowgateGaz82: Luke, I heard that the club are releasing a DVD in time for Christmas, The Entertainers 2.0. Pleasr can you confirm if this is correct, or not?

@allyandthecavs: The moment he says “the dressing room is United behind him,” is the moment you know his informant is Steve Bruce. #nufc

@MartinJohnson10: I’m genuinely interested in knowing what it will take for Bruce to leave. It’s a results business and he isn’t getting them. It’s like the club just don’t care or can’t be bothered to make an effort to improve

@HowaytheToon: Fans haven’t really made it uncomfortable though have they? Few chants here and there but Bruce isn’t exactly shutting the bed is he? If only our fans could join up and agree on a plan of action rather than invest time in Twitter spats.

@sebbie_88_: “More entertaining to watch”… absolutely nothing to do with the manager and everything to do with just giving the ball to ASM. The performances have deserved 2 more points than we have. That’s it.

@MickStraker: I think this shows how little the people in charge know about football, I’d love to know what performances have deserved more points, and since when is entertaining more important than results when you’re fighting relegation?

@GB4G: Such a wind up merchant could not careless what those in power say he is useless as a manager and I’d have Rafa back in a heart beat look at Everton club with ambition something sadly lacking at NUFC

@mgillon81: What happened to it being a results business. Watching us concede 4 to West Ham and look like we could have conceded 4 to both Southampton and Leeds is not entertaining to me

@alwaysyourway: We may aswell start planning for the championship then!