Neil Lennon blasts Celtic fans for ‘giving the club a bad name’ in an astonishing interview as he signs up for a new media gig.

The ex-Celtic boss admits his final season was “joyless” as he hit out at at a “new breed” of fan who protested furiously.

The campaign begun with the Parkhead club going for 10 Premiership titles in a row but the season quickly went downhill.

It comes as Neil Lennon joins up with The Times to provide a regular Euro 2020 column and an exclusive interview, which you can see below.

Scotland editor Magnus Llewellin confirmed the news on Twitter earlier in the week.

Celtic’s domestic dominance was ended by a grim League Cup defeat to Ross County, sparking angry protests outside the stadium.

Lennon remained at the club until February but walked away after another defeat to the Staggies and Rangers officially wrapped up the title just weeks later.

Things had turned toxic by the end of his tenure and he admits being hurt and confused by supporter anger.

Lennon told The Times: “Speaking to the players the next day (after the League Cup loss) they were really disturbed and upset by that.

“Literally upset by it. That was the first cup defeat in 35/36 games. It was the end of an unbelievable cycle of success and for them to be treated that way was bewildering. They should have been lauded for it rather than abused.

“They were getting pelted with missiles. It was very sad. There was a new breed of supporters that I had nothing in common with and who belie the values of the club.

“They are the ones that are giving the club a bad name.

“It was definitely a situation like no other. You’re going for the tenth title in a row and that was an obsession for the fans, an unhealthy obsession I felt. And we were in the midst of a pandemic where nothing was normal.

“So you put that together and there were a lot of things that were out of your control as a manager.

“I had nothing in common with those supporters and the way they treated Dermot and Peter as well, shocking.

“Considering in December we had just finished off another treble, two months later you are out the door.

“The whole thing seemed joyless. There was no credit it for it. It was just ‘yeah Celtic have won another treble, move on’. There was a lack of joy around the place and that was really difficult.

“You are in the game to enjoy it. It was all about the football but this season football took second place to a lot of things.

“It’s basically fans I’m referring to more than anything else.

He was recently filmed drunk and being hassled by another male, leaving fans shocked with the footage which can be seen HERE. 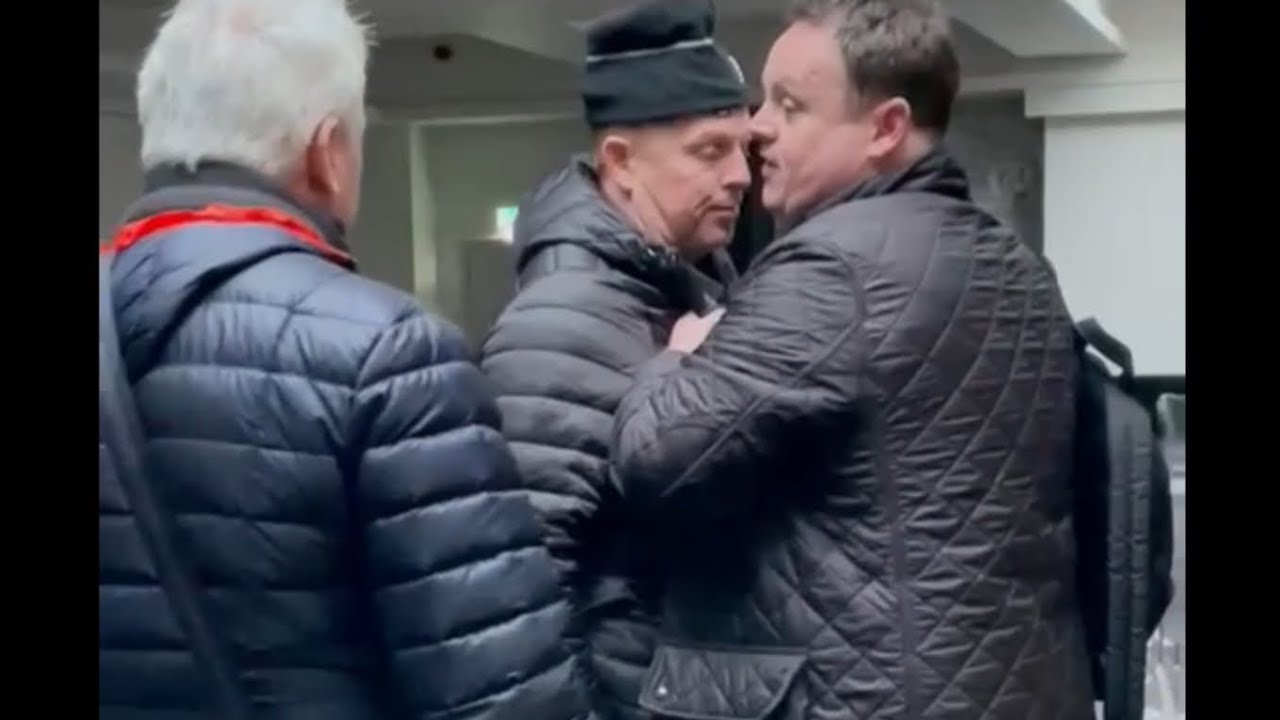 Some have suggested that Lennon is a ‘man out of time, with old school methods not suited to the modern game’.

However the Celtic legend insists nothing could be further from the truth as he offered a vigorous defence of his record.

Lennon said: “People say ‘he’s not that good’ or ‘he’s a dinosaur’. A dinosaur at 49 is strange. Eighteen months ago I beat Lazio in Rome, the first Celtic manager to do that.

“It’s about changing the public’s perception but then again it’s not really their perception I want to change it’s the owner, chairman or chief executive of a club.

“Does it grate on me? Of course it does. It’s just absolute nonsense. I’d just won a treble so if I’m a dinosaur what does that make all the rest? It’s not like we played route one football.

“We were flexible with changes, we could play a diamond or a back three or 4-3-3, I had young coaches like John Kennedy, Damien Duff and Gavin Strachan who were very forward thinking and our coaching methods were all geared for the modern player.

@edcassidycomedy: He talks like the Ross County game brought about that reaction on its own and wasnt just the latest abject result in a season that the wheels came off on day 1. Deluding himself as per usual, everyones fault but his.

@kieran_auld: Another Neil Lennon classic. I honestly can’t believe I have been hounded numerous times for refusing to show respect to a man who has continuously refused to accept responsibility and treated fans with absolute contempt this past year. So out of touch with reality it’s scary.

@HereCelts: Neil Lennon’s comments on the Ross County cup defeat are very disingenuous. The unrest outside the ground shouldn’t be condoned by the few who took it too far. However, it wasn’t just crashing out the cup. It was the entire picture unfolding that was the final straw.

@aconnolly91: Neil Lennon, a “club legend” going after the fans for his failures. Really disappointing. I’m really sick of the REAL fan debate in football, if you support a club you’re a fan, end of. There’s no scale or barometer

@hamishcarton: Blaming the fans and COVID for that shambles of a season. Sad to see that Neil Lennon STILL doesn’t get it

@bhoysviews: Neil Lennon can go and fuck himself – arrogant , unprofessional , incompetent twat! Fully culpable for last season. He was backed and he well and truly fucked it!

@tammckinlay9: The Trust played a huge part in Neil Lennon staying so long btw and nobody can tell me otherwise. They ensured there was ZERO focus on removing the manager during the organised protests.

@snm__67: If Neil Lennon came out and took even the slightest responsibility for the part he played last season, he would regain a little respect from me. Instead he attacks the support any chance given. Strange.

@CommunityCeltic: The Neil Lennon interview seems to, once again, highlight the disconnect between the Celtic heirarchy and the fans.

@Dec__94: Fuck Neil Lennon and fuck every single of the players that supposedly got their feelings hurt last year.

@Doolza67: New breed of managers he’s got fuck all in common with aswell

@renfaketaxi16: He is right though!!!! As a rangers fan the Celtic fans treated him shite all because they had 1 bad season they don’t have right to automatically win everything but must say it was good watching

@CairneyMarc: Is this the new PR team hes hired at work? Brush aside the fact he was in charge of some of the most embarrassing results in our history, broken unwanted revords, showed real tactical naivety (if he had any at all) and sat with his legs crossed as we went from disaster 2 disaster

@hevalecraig: Neil Lennon the man that took the job he left under the same circumstances and now is blaming everyone but himself,this is the guy that picked Lewis Morgan over Scott Sinclair because of contract issues as it certainly wasn’t a football decision

@TheCelticWay3: If that Neil Lennon interview does anything, it confirms that he is absolutely shameless and has a serious lack of accountability as a professional and a coach. Cringed all the way through reading that shit.

@MLTim88: Neil Lennons interview in the Times is exactly what we’d expect from Neil Lennon. Everyone else’s fault but his. Fans to blame because they shouted at the players and poor Peter and Dermot got their feelings hurt. Just fade into insignificance Neil, now isn’t a good time.

@howlinwhippet: This is so utterly delusional and trying to support his mates on the board that it’s laughable. HE was the main problem- his outdated lack of tactics other than switching wingers was his downfall, not the fans fault. This is Pravda trying to be divisive via NL.

@ConorM67_: Neil Lennon doesn’t get it and seemingly never did.

@daft_Gav: When you select the same players week in week out regardless of performance it sets a tone. Selected players don’t give a toss as they know they’ll be playing, squad players who have worked hard in training know they ain’t getting picked regardless.

@jamesmcerlean12: Complete drivel by Lennon. The fact he can’t even take any responsibility for the absolute shambles of a season speaks volumes.

@CollectCelticFC: He has to take blame. Rodgers made Good players great. Lennon made good players poor. He should have been gone a lot earlier than he was

@rgx1967: Neil Lennon has just ruined anything he had left with the Celtic fans. That interview is absolutely shocking. So far from reality. Sorry we were obsessed about making history Neil

@vixm: If this is Neil Lennon trying to rehabilitate his image & repair his relationship with the fans, he has failed miserably. What he says smacks of fogyism & shows he is every bit the dinosaur he’s trying to clam that he isn’t.

@AshleighMeikle: I loved Neil Lennon as a player. The fight, desire, passion. As a manager he sat in the dugout with his feet up watching us get beat. Interviews like this, living on the success of previous managers while taking no ownership are insulting and disrespectful.