Marcus Maddison explains why he walked away from the EFL and chose to play in England’s eighth tier in an honest interview with SPORTbible.

Football fans up and down the country was surprise after seeing that he had recently joined Northern Premier League Division One Midlands outfit Splading United.

It was recently revealed that he was in a dark place and even contemplated crashing his car on the way to a game it got that bad.

“It’s awful to say but I literally just wanted to take a picture of my car in a ditch, just to say I couldn’t make it in,” he tells SPORTbible. “I just didn’t want to be there.”

At the time, the attacking midfielder was playing for Peterborough United as he made his way towards London Road on that day. Some would say he had everything going for him when it came down to money and getting in the headlines for his football abilities. But in the mind of Maddison, not all was well.

After joining in the summer of 2014 from National League Gateshead, he quickly became a key player under manager Darren Ferguson, who has just guided the club to the Championship. In his first campaign, Maddison was the club’s second top-scorer with eight goals from midfield, and he continued that form for a number of years later.

“Every transfer window from joining in that September, they spoke about me leaving in December, and from that point, in every single window, there were rumours. But it never happened,” he added.

Despite never getting a dream move further up the leagues he continued to impress and score goals, bringing in 62 in 249 appearances in a six year spell with the Posh. Over time, his passion for the game was disappearing. “The love for football probably hasn’t been there for a long time,” he admits. “It has a job for maybe three or four years. It’s nice to come out of it, to be honest.”

In May 2021, Maddison decided to quit his full-time job as a professional footballer to join Spalding United, now he has given an insight into why.

On one Friday afternoon, Marcus Maddison was sitting in an upstairs bedroom of his Peterborough home, and downstairs, somebody was heard walking around.

After joining Hull City on loan for six months, he didn’t plan on coming back to Cambridgeshire, so Maddison let a friend and his family move in.

“Since making the decision to come back, I can’t ask him to leave because he’s got nowhere to go,” he tells SPORTbible over a Zoom call.

“It’s a decision I’ve made for myself. My decision shouldn’t affect him. So, this is my room. I can go wherever I want in the house, just living with people for the first time in a long time is a strange one. I’m 27 years old. I’m so used to living alone. I’ll get used to it.”

He expressed how he’s loving life right now, compared to the demands he endured as a footballer. “This is the longest time I’ve had off away from football,” Maddison says. “I can do what I want, when I want. I just got up at 1pm in the afternoon, because I don’t need to get up for anything in particular. It’s just nice not having rules and structure constantly at the minute.”

“I’ve always not enjoyed getting up and going to training. Some players love it, but really I don’t want to be there.

“I don’t see the point. That has never been the case for me. Saturday and Tuesday’s is what I live for.”

The ex-Newcastle United academy graduate has never been able to properly get used to the lifestyle of professional footballer. During his days at Peterborough, he used to eat an Indian takeaway on a Friday night ahead of a game.

He also ate a chicken tikka masala with rice and chips with a naan bread.

“I loved it,” he laughs. “It was my favourite. And it made no difference to my performance on a Saturday.” 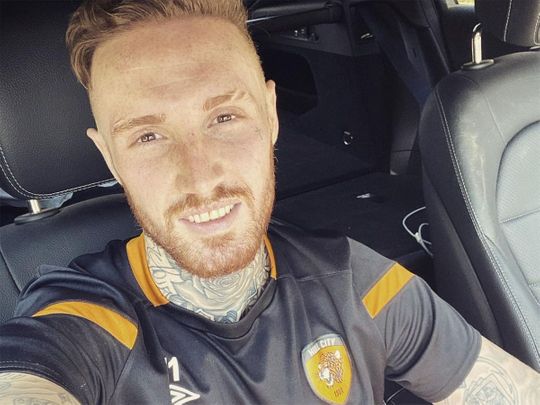 On a typical match-day, Maddison would continue this every week. It was more of a superstition than anything, he adds. He would wake up [usually with 45 minutes to spare] and on his way to the ground, would stop at Tesco to eat a £3 meal deal.

“Chicken Pasta pot, a flapjack and a Lucozade orange. That would be my pre-match meal and then I’d play,” he says.

“I played better when I was happy. When you do what you want, and when you enjoy life, it shows in the performances. I always found when I tried to do everything correctly, and I did what everyone wanted me to do, my performances dipped because I was keeping everyone else happy and not myself.”

After some fans became frustrated by his style of play, his performances had a negative effect on his life off the field.

“In this city, I become a villain for no reason,” he says. “My car got keyed on my drive. I’ve been punched on nights out for no reason – just because of the way I play football. People don’t agree with it. They think I’m arrogant. People can’t differentiate between the man that’s a footballer and the man who is a normal person.”

On leaving Newcastle and playing for the likes of Blyth Spartans and St Johnstone: “I was so lost,” he admits. “I didn’t have a clue what I was doing.”

“I was quite fortunate that I joined Peterborough with Darren Ferguson in charge,” Maddison says. “He was quite relaxed on the training ground, say if you had a niggle or anything like that, he was cool with it. Because I’d just gone up the leagues, my body was a bit battered and bruised.

“I suffered a few injuries in that first season. He would give you time off – as long as you could play on a Saturday, it didn’t really matter if you trained. He wasn’t like that when he came back to Peterborough, I can’t lie, but when I first arrived, he was really relaxed in that sense.”

“I’ve felt hard done by in the past,” he says. “I believe if I had played in the Championship earlier, I would have gone on to play for a Premier League club. I believe I’ve had my time. I know I’m only 27 and this is meant to be my prime, but I’ve tried my hardest with my ability. If you’re not going up the levels, it’s not for you.

“I was getting 22 assists, 13 goals. Double figures, season after season. Doing that as a midfielder, you’d think surely, year after year, somebody was going to come in but it was just constant disappointment. Eventually, I was just like: I don’t care anymore.”

Hull chose not to hand him a new permanent contract, when his time at Peterborough came to an end also.

He went on to Charlton with a one-year deal but it didn’t go how he wished and then went to Bolton on loan, making 10 appearances.

“It just felt like everything went wrong for me at Bolton,” he admits. “From the minute I joined, I went to put my TV up in the bedroom and the TV fell and smashed. In my first game, I got a red card in 10 minutes. And I also crashed my car.

“Just loads of different things. It just kept going wrong and wrong and wrong. I’m away from home, in a hotel room, seven days a week. Can I be bothered with this? I wasn’t playing or enjoying myself. I didn’t want to be there.”

“It got to a point where I didn’t care what they said. I said to my agent that I don’t care whether they allow me to go or they fire me, I’m going. I’ve had enough. But luckily [manager] Ian Evatt and the owner were very understanding. They rang me as I was driving home. So I’m glad they understood, but I was leaving regardless.”

His loan was cut short and hours after, he posted a powerful message on Instagram detailing how the football industry had left his broken.

“All the abuse, pressures and monotony of the last two years has just got to me,” the 27-year-old wrote. “I’ve tried to fit in and be happy but if I can’t be happy In a winning team fighting for promotion it’s clearly something deeper. I’m returning home to think ‘do I want to play football anymore’ as it just doesn’t bring me any joy at all.”

He was away from family, friends, in an apartment on his own in a place he didn’t know. This was really not where he thought his career would end up.

“You’ve got 30 people around you daily in training but, it’s still very lonely, especially if you’re not a bubbly and outgoing person,” he tells us. “You just keep yourself to yourself, do your job. It’s very lonely at times.

“It’s been the same way for such a long time. It’s such a lads, lads, lads environment. You’ve got so many men in close proximity. If you’re not an outgoing, bubbly person, you find it difficult. Most dressing rooms in the whole country are the same. I’ve found that going to different places.

“Football has a very specific kind of banter. And if you don’t fit into that category, and you don’t enjoy that sort of banter, you’re not going to have many friends. I believe that was the case for me. I had a couple of people I got on with. But I don’t really have any friends in football. I’m my own man.”

“I used to get abused every day. I still get messages sent to me on Instagram all the time. People being nasty,” he says.

“It’s something I’ve never really understood. I wouldn’t look at a post that’s somebody else has put, and think if I didn’t like it, that’s fair enough… that’s my opinion. But to go out my way and message someone about that post? It’s so vindictive and there’s no need for it.”

“There are loads of things people don’t actually know about. That is the football world,” he says. “There are so many things hidden because you’re not really meant to speak about it. A lot of people don’t understand it. Football is very mentally tough, in my opinion, That’s the part I’ve always found hard.

“The football part comes easy. it’s just all the stuff that goes with it.”

Spalding boss Gaby Zakuani, who played alongside Maddison at Peterborough, was a huge reason behind his latest decision.

“Gaby is a huge thing for me. He reached out to me first. It was literally that. It was like a first-come, first-served kind of thing. I know him well. He’ll let me play how I kind of want to play. He’ll give me free rein.

“It’s part-time so it’s not a huge commitment. It’s everything I want from football at the minute. A relaxed atmosphere. Have a laugh, Play well and just get back to enjoying what football is actually all about.”