Leicester City duo have been praised as they show their support for Palestine after their FA Cup final win against Chelsea on Saturday.

Hamza Choudhury and Wesley Fofana unveiled a Palestine flag on the Wembley pitch before showing it to the media and on national TV after winning the world’s oldest competition.

The Foxes came out 1-0 winners over Chelsea as Youri Tielemans hit a stunning second half winner before Ben Chilwell saw his goal controversially ruled out by VAR on the verge of full time.

Afterwards, the Choudhury and Fofana were seen on the pitch holding the Palestinian flag amid bloody tensions with Israel.

Hamza Choudhury with the Palestinian flag around his shoulders 👏🏿 pic.twitter.com/sqOCKnpaBf

An Israeli air strike has reportedly killed 10 people in a refugee camp based in the Gaza Strip, while a Palestinian rocket attack killed a man in Israel.

A week of escalating violence is the worst seen between Palestine and Israel since 2014, with much of the world watching on just wanting peace between the nations.

Both sides have been urged to ease tensions by nations around the world with more than 139 people killed in Gaza since Monday. Nine Israelis have also died.

Tensions reportedly began to escalate a number of weeks ago and they were heightened by clashes at a holy site revered by both Jews and Muslims.

Husam Zomlot (an Ambassador, Head of Palestinian Mission to the UK) wrote in a letter on the Leicester duo choosing to show support for Palestine: “To Hamza Choudhury and Wesley Fofana, Leicester Football Club,

“Allow me, on behalf of the Palestinian government and people, to extend our profoundest gratitude that, in your moment of FA Cup triumph, Hamza Choudhury and Wesley Fofana, used the historic occasion to show solidarity with the plight of the Palestinian people.

“Carrying the Palestinian flag on the stage of one of football’s most august cup competitions is a show of support that is reverberating all over Palestine. For a people beleaguered, occupied and under intense bombardment for daring to stand up for their rights, your gesture could not be more timely and appreciated.

“Nelson Mandela once said that no one is free until Palestine is free. With your show of support today we hope that day is one step closer.

“Congratulations on your cup win. And together, one day, we hope Leicester Football Club will play in Jerusalem, the capital of the free state of Palestine.

“With my deepest respect, Dr. Husam Zomlot Palestinian Ambassador to the UK”

Former Foxes winger Riyad Mahrez has tweeted his support for Palestine in the last few days, as has Premier League midfielder Mohamed Elneny.

Arsenal hold talks with Elneny after sponsors expressed a concern over his social media post. The club want to ensure “he understands the wider implications” of a his tweet expressing support for Palestine after concerns were raised by one of the club’s sponsors Lavazza Group.

Over the past week, tensions in the Middle East have escalated between Israeli and Palestinian groups.

In response to the events, Elneny took to Twitter on Monday and posted a tweet to his 4.8 million followers that read: “My heart and my soul and my support for you Palestine.” 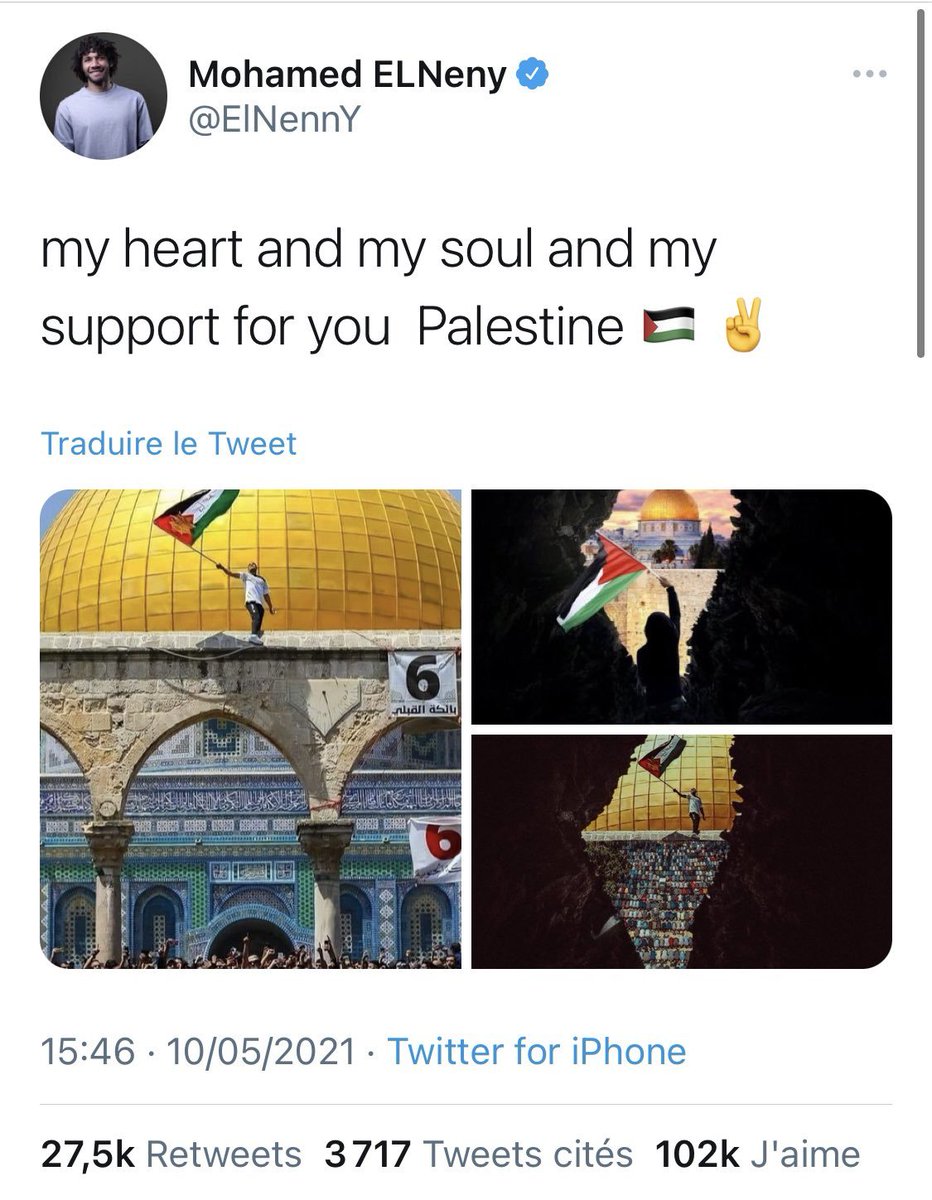 As mentioned by the Jewish Chronicle, the post prompted anger among some of the Gunners’ Jewish supporters due to the fact that it contained an image called ‘Palestine Lives Matter’, which featured an outline of Israel filled with pro-Palestine images.

“We’ll immediately reach out to Arsenal to remark we are concerned about the club associated with such a message,” read a statement from the coffee manufacturers.

“Content of this post is totally not aligned with our company values. Lavazza Group is fully committed against racism and antisemitism.”

In response to this, Arsenal said that Elneny was free to express his own views on his own social media channels, but confirmed that they had spoken to him to warn him over the implications of the post.

“As with any employees of Arsenal, our players are entitled to express their views on their own platforms,” said the club in a statement.

“That said we have spoken to Mo about this so he understands the wider implications of his post.

“As a club, we are committed to confronting and eliminating all forms of discrimination and continue to champion the need for equality and diversity across all areas of life.”

It comes as West Ham United have deleted a message of support for Palestinians on Twitter, which was posted on the club’s official Arabic-language account after days of Israeli bombing in Gaza.

“Oh God, grant them victory over the oppressive people. Palestine was and will remain a land and home for the Palestinians alone,” the tweet read.

“Nasrallah is coming, even after a while, the Hammers are behind you,” it added, referencing West Ham’s nickname.

The account, run by a fan called Abdullah, was set up in 2016, and after a year of posting, West Ham management asked Abdullah if he would like to make the account official, but leaving him in charge of posting.

According to reports by Arabi21 when asked to remove the Palestine tweet by club management, he refused.

It prompted West Ham to step in and sack him from the Arabic account, despite being its creator.

“They told me that the tweet put them in an embarrassing situation,” he told Arabi21.

The North Curve is flying the flag for Palestine at tonight’s Celtic game pic.twitter.com/Rxmv0Jqo7J

Fans were told they could display flags in support of the club captain, Scott Brown, who was playing his final game. But the club management thought the fans exploited the opportunity by laying Palestinian flags.

“Unfortunately a small group, which was given access in good faith, has attempted to exploit this opportunity, taken advantage of an occasion intended for our club captain, Scott Brown, and used it for a different purpose. Clearly this is unacceptable and the display was immediately taken down by the club,” a statement from the club read.

@KarlOKane: Fair play to the two boys when the world is silent and the superpowers are all lining up against the Palestinians, easier to say nothing but they didn’t

@jasonangelo: Signs you’re becoming a #LCFC 🦊 fan:
(1) Seeing the interaction between Top and the players/manager
(2) Players that can show solidarity with Palestine with no fear of repercussions
(3) Having a discussion about how great the 2nd half was with your ASDA driver at 8:30 am

@SalahSamara9: Despite risking getting fined by the FA, Hamza and Wesley have made use of their platforms to bring light to the ongoing issues in Palestine.

@Marklamar20: Filling up reading that out to my wife, my words faltering, what a beautiful letter.

@BaldockNigel: We tried to reach the Israeli Ambassador for a comment but apparently he threw his mobile phone at his flat screen TV, he blamed Hamas for destroying both.