Kilmarnock hit back at Kyle Lafferty as row escalates

Kilmarnock have chosen to hit back at player Kyle Lafferty as a row between the two escalates following the conclusion of the 2020/21 season.

Killie state that wage demands higher than the club could afford were part of the reason why the individual departed Rugby Park in recent days.

On Friday, the club announced that the Northern Ireland international was among those who “decided to move on” this summer. In an interview with the Daily Record on Saturday, Lafferty disagreed with that depiction of the situation, saying that he wanted to remain at the club. 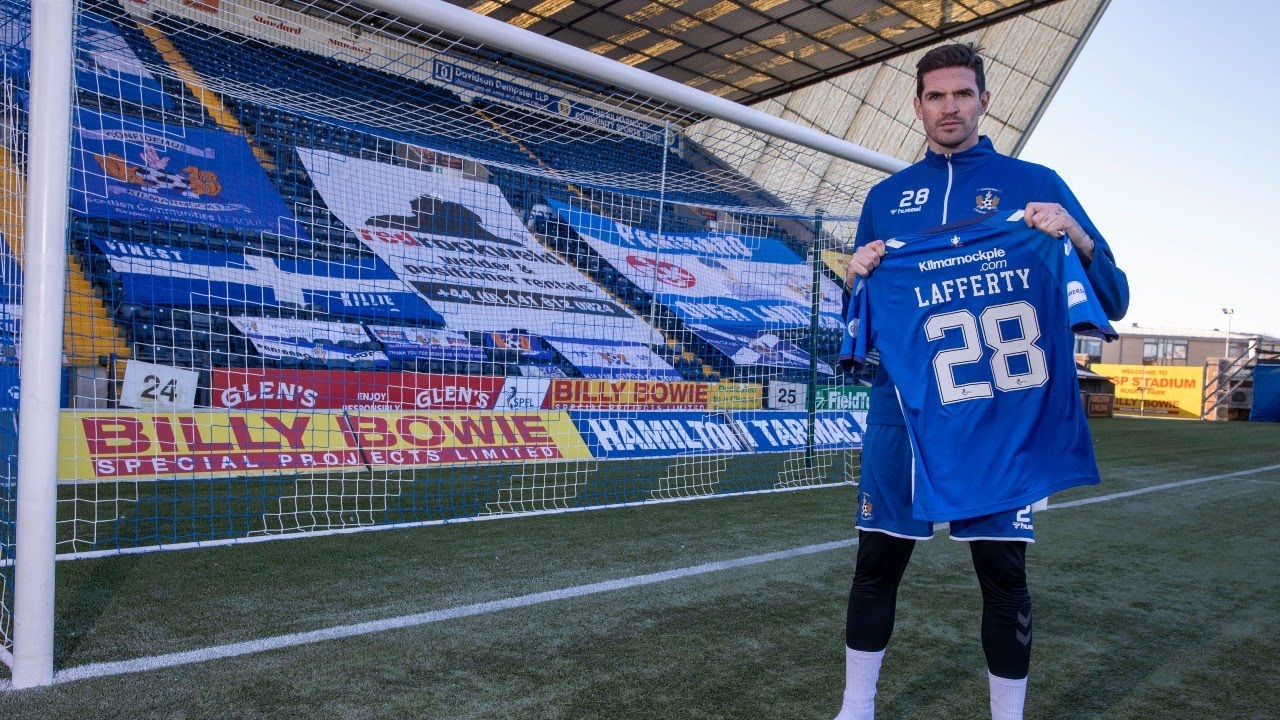 After joining Kilmarnock in February, the 33-year-old scored 13 goals. Though, it was not enough to prevent the club from dropping out of Scotland’s top tier for the first time in 28 years.

Lafferty added that he “wasn’t asking for the earth” with his wages demands. In a statement on Sunday, Kilmarnock painted a different picture, saying that Lafferty’s representatives asked for wages “four times higher” than what the player had received towards the end of the season.

The club also rejected a claim by Lafferty that some players were only given “a few hours” to make a decision about a contract offer.

“The club is not in the habit of making public statements on matters around player contracts, preferring instead to conduct our business in private, however Kyle’s comments to the newspaper require us to make our position clear,” reads the statement from Kilmarnock.

“Following the conclusion of the play off against Dundee, we entered into negotiations with players we wished to retain for the 2021/22 season which included Kyle.

“We received a series of figures from his representatives which were four times higher than the sum he received towards the end of the 2020/21 campaign.

“At this point, we informed Kyle and his representatives that there was no possibility of agreeing to those terms, which would have had a monumental impact on the allocated first team budget for the season.

“Following further discussions and both parties remaining miles apart, it was clear that no deal could be struck and in order to continue our planning for 2021/22, talks were brought to a close.

“Kyle told the newspaper: “that contracts were offered to individuals and given a few hours to make a decision.”

“This is simply not true.

“Every player offered a contract for 2021/22 was given a period of several days in line with a deadline set by the club to decide whether they wished to accept our offer. Some of those players opted to turn down a new deal, which they are perfectly entitled to do.

“While disappointed to read Kyle’s remarks, we reiterate our thanks to him for his contribution to the club and wish him well for the future.

“As the club continues to rebuild for next season, it is important that our supporters know that we’re doing everything to support Tommy Wright in building the strongest group possible to win promotion back to the Premiership and we thank the fans for their fantastic response in the first week of season ticket sales, which provide vital funds for the manager.”

As Kilmarnock hit back at Kyle Lafferty as row escalates, fans also had their say…

He seemed such an honest fella too. pic.twitter.com/x3HoBtgPrH

Great Fact and put in the right context of his contribution to the team. Hyped up by his agent and the Rags in this country.

@MintyMcp: It would be beyond madness to request a 300% rise from a club only just relegated. Whilst we know Lafferty isn’t the brightest, I suspect agent foul play here. Why you’ve allowed this to play out through the media though 🤦‍♂️

@Scotsfiddler: if you spend too much on one player and they get injured on day 1 then it proves folly. Best give Innes Cameron a chance alongside a couple of astute signings for long term of club. Said it before, a top quality keeper would have proved more valuable even than Laff’s goals.

@StevieD1869: Personally think we’ve dodged a bullet there. No player is bigger than the club!

@Killiegirl1: 100% believe this and with the club on this one. Ridiculous comments by fans believing what Lafferty said. Thanks for your help Kyle but we move on.

@dawross: Think I believe the club over that mercenary

@pcoops18: Need players in it for the cause not budget drainers. Well done to the club on releasing this statement

@mcvieg: Well done Killie for nipping this one in the bud, clubs should respond to tabloid guff more often!

@colinMcD1010: Excellent statement well done to the club for clarifying this situation ASAP.

@stuartwlittle: Good statement from Kilmarnock FC and thanks for clarifying. They are correct and the funds should be used to bring in 2-3 players who will strengthen the squad.

@Dan1elMK: Great statement and sets any doubters wrong. Really enjoying this relegation carry on, clear transfer plan & the board keeping us updated on lots, maybe a blessing in disguise in the long run

@mikenodes: I suspect KL wanted fans to think he was up for staying, absolutely didn’t want to stay and sent his agent in with a ludicrous demand. So glad Killie have called him out here

@albertz_g: His agent probably never told him the figure at the beginning and said it’s too low and to ‘leave it with him’. Days between KIllie and his rep would have passed while figure flew around and he then heard from his rep with only hours to go. I reckon the agent would be to blame most

@MathewMcBride2: Some way to repay the club that revived his dead career..

@DuncG73: Class from Kilmarnock. No player is bigger than a club.

@TheLeatherBelts: Likes walking out of clubs that are either going out the game or relegated.

@Swanhibby: Well done Killie , the mans been an over rated mercenary, hacking himself around Europe for money and little thought for any of the clubs he has played for. Didn’t turn up for the 2 games that mattered. Dodged a bullet by letting him go.