Kettering Town go viral with a tweet mocking Prime Minister Boris Johnson – and it is also getting Gary Neville’s approval.

Just like the thousands who have mocked the PM following his apology over the Downing Street party during May 2020 lockdown when the coronavirus was rife, National League North Kettering have got in on the mickey taking.

Boris Johnson said sorry for attending a “bring your own booze” gathering during the first Covid lockdown, telling MPs he had attended the party, held in the No 10 garden, for 25 minutes whilst the country were handed a new set of rules and guidance with the death rate soaring.

He asked for senior official Sue Gray, who is investigating that and other events in government buildings, to be allowed to complete her inquiry. 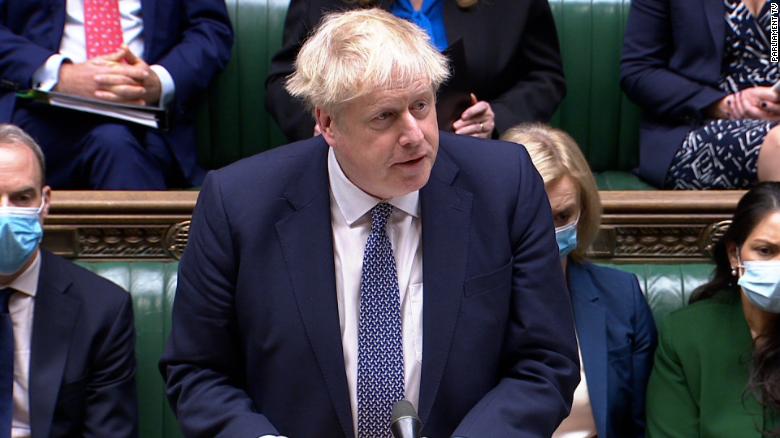 Mr Speaker, I want to apologise. I know that millions of people across this country have made extraordinary sacrifices over the last 18 months.

I know the anguish that they have been through – unable to mourn their relatives, unable to live their lives as they want, or do the things they love.

And I know the rage they feel with me and with the government I lead, when they think that in Downing Street itself the rules are not being properly followed by the people who make the rules.

And though I cannot anticipate the conclusions of the current inquiry, I have learned enough to know there were things we simply did not get right and I must take responsibility.

No 10 is a big department with the garden as an extension of the office – which has been in constant use because of the role of fresh air in stopping the virus.

And when I went into that garden just after six on the 20th of May 2020, to thank groups of staff before going back into my office 25 minutes later to continue working, I believed implicitly that this was a work event.

But, Mr Speaker, with hindsight I should have sent everyone back inside, I should have found some other way to thank them, and I should have recognised that even if it could be said technically to fall within the guidance, there would be millions and millions of people who simply would not see it that way.

People who suffered terribly, people who were forbidden from meeting loved ones at all, inside or outside.

And to them and to this House [of Commons], I offer my heartfelt apologies.

And all I ask is that Sue Gray be allowed to complete her inquiry into that day and several others, so that the full facts can be established. And I will of course come back to this House and make a statement.

Following this, the Poppies’ social media team took the opportunity to take a dig at Boris.

In their tweet, they referenced the 1-0 loss against Brackley Town in the National League North on Tuesday evening, saying: “We agree and understand that there have been rumours that we lost last night’s match.

“We, of course, could’ve done things differently, but would advise people to await the outcome of Sue Gray’s inquiry before jumping to any conclusions… #AfternoonPrimeMinister | #NN15 | #KTFC”

We agree and understand that there have been rumours that we lost last night’s match.

We, of course, could’ve done things differently, but would advise people to await the outcome of Sue Gray’s inquiry before jumping to any conclusions…#AfternoonPrimeMinister | #NN15 | #KTFC

The tweet has gone on to get nearly 30,000 likes, with the help of Manchester United and England player turned Sky Sports pundit Gary Neville, who has previously spoken criticising the government in recent weeks.

He retweeted it and helped it on it’s way.

@NeilHammacott1: I was there for 25 mins before I realised it was a football match

@stokelabourite: Your old manager Gazza has turned up at 10 Downing Street with some beer and a fishing rod.

@MCJeffsy: Take the points off @BrackleyTownFC instead. I’m sure all 5 of their fans would be disappointed. Would rather a proper club get promoted.

@vipermama2: I’ve never supported a football team before, but I do now. 🏆

@BlokeOnWheels: I was in attendance at the match, actually, I’m not sure I was. I’ll have to wait for Sue Gray to confirm.

@cavemanshariCFC: Kettering with the bants

@sharkey2007: When you are being trolled by a football club you know you are doomed

@TheWillyCally: Is James Acaster the admin?