Jordan Pickford amusingly reveals what he’ll do with Jack Grealish if England go on to win UEFA Euro 2020 later this summer.

So far, the shot-stopper hasn’t had all the much to do true be told, apart from a few cracking saves, as he looks towards the last 16 clash against Germany.

He says it will be a privilege to play against goalkeeper Manuel Neuer – and hopes to get a hold of his German counterpart’s shirt following the game.

Pickford admits he is a huge admirer of Neuer – and it’s no wonder, after all he is a world champion and serial-winner with Bayern Munich – and is excited to come up against him in the mammoth clash at Wembley next Tuesday.

Speaking exclusively to talkSPORT, Pickford said: “His career has been unbelievable, probably up there with the top three best goalkeepers of the last decade.

“A sweeper keeper, he’s not shy is he? He’s a brilliant goalkeeper, I love watching him on TV and it will be a privilege to be playing against him.

“I’ll ask him for his shirt… If COVID lets us!

“It’s about first and foremost getting the win against them and then being able to do that after.”

Pickford is yet to concede a goal for England at Euro 2020, but knows he’s in for an almighty test against the Germans who have put in some bizarre performances in June.

“We know they’re a top side and how hard their group we was,” he said.

“We know the quality that Germany have and it’s up to us to be prepared the best we can be against them.”

While Pickford would prefer to win in 90 minutes, he and his teammates are ready for a shootout if needed.

He added: “It would be lovely to beat them in 90 minutes but we’ve got to be prepared for anything. That’s what we’re trained for, that’s we’re preparing for all week.”

With Coid restrictions eased, 40,000 fans are to make their way through the turnstiles and inside Wembley on Tuesday and Pickford is anticipating an incredible atmosphere having spent the majority of the past year playing behind closed doors.

“It’s tough not been having fans and then all of a sudden having 8,000 at Middlesbrough, then going into 22,500 at Wembley, it just feels like a full stadium,” he said.

“We were talking about the national stadium, with having fans back, it’s hairs on the back of your neck, the shivers and all that come back and the pride you get off that is amazing.

“To be doubling the capacity on Tuesday, I don’t know what it is going it sound like… it’s going to be incredible.”

England won’t be getting ahead of themselves but if they do lift the trophy on the 11th of July, then it’ll be some celebration from Pickford, who says he’ll join Jack Grealish on holiday in Las Vegas and officially ‘get the rave on’. Now that is something we’d all love to see.

Jordan Pickford reveals what he will do if England win #EURO2020 this summer.

When asked what he’ll do if England win Euro 2020, Pickford said: “Wouldn’t you like to know?

“Three weeks in Vegas with Jack… it would be a great experience and I’d be definitely getting the rave on for a good spell!”

Pickford has previously admitted he is a much ‘calmer’ person and goalkeeper these days thanks to sessions with a sports psychologist.

‘I just feel in a very good place,’ the 27-year-old told The Telegraph. ‘I began working with a psychologist at the start of the season.

‘You know in football, those little one or two per cent gains — just to raise your ability on the pitch and what you can achieve — are crucial. Whether it’s nutrition, psychology, extra gym sessions. I think it helps. So why not use it?’

He added: ‘I have to think how lucky I am; all of the work my family put in – from me being six, seven years old with my parents taking me to football all the time.

‘The amount they have invested in me. It’s about how can I keep that level of performance and look back to where I have come from.

‘It’s crucial and I feel that I have kicked on this year. I feel calmer, I feel in the moment and I feel great.’

As Jordan Pickford reveals what he’ll do with Jack Grealish if England win Euro 2020, Phil Foden says teammates will copy the Gazza haircut should they win the tournament. 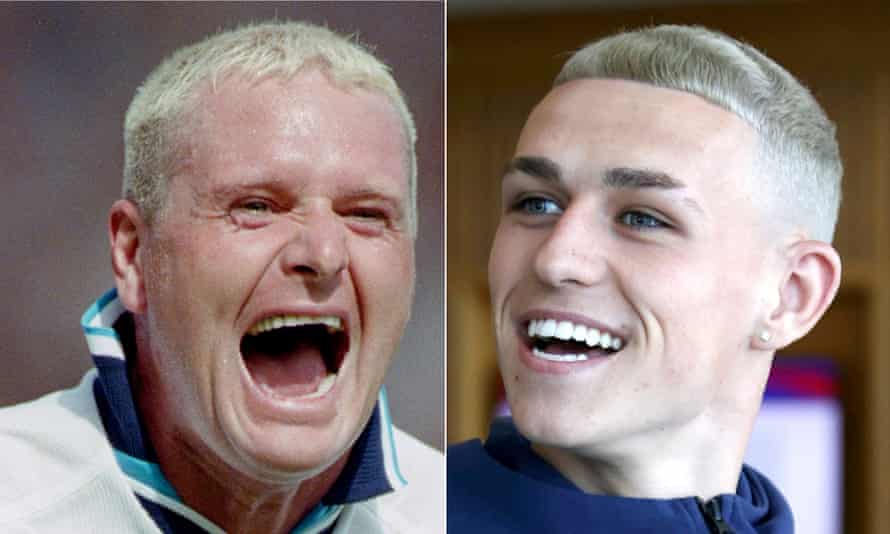 Asked about Gascoigne, Foden said: “It was my own thing and then I saw people turn it into something else and I kind of just jumped on it like everyone else would.

“I think Razza [Raheem Sterling] said to you that I was speaking to him about Sergio having the same kind of hair and that I liked it so, me being me, I decided to change it up and called the barber to come and do this and I’ve liked it ever since. I’ve made it even lighter. I had another haircut the other day to make it lighter.”