Ivan Toney slams comments which have been made about Leeds star Patrick Bamford, with the two enduring quite similar careers.

The Brentford forward’s record-breaking season in the Championship looks hugely encouraging for his prospects as he and his side get ready for their debut Premier League season.

And in the days leading up to the big occasion, with Brentford taking on Arsenal on Friday night, he has shared that Patrick Bamford’s performances for Leeds prove that ‘someone else’s opinion doesn’t really matter’ after he hit out at the people who have previously thought that he is ‘not good enough’.

The 25 year old Bees striker came through the ranks at Newcastle United, but just like Bamford who was at Chelsea, he ended up going down to the lower leagues in order to get game time, to develop and go on and make a name for himself.

For Bamford, he had to go to various clubs before finding the right fit at Leeds United and helped them win the Championship two seasons ago.

Toney found the net on 31 goals occasions as Brentford earned promotion via the play-offs last term.

Toney will now be getting ready for the biggest stage of his career, sharing his thoughts on Bamford and the similar paths they have gone down.

In an interview with Stadium Astro, he said: “His journey has been similar to mine. It just goes to show someone else’s opinion doesn’t really matter. It’s just what you think and focus on what’s in your head.

“Of course, people are saying ‘he’s not good enough’. But if he deems himself good enough then that’s all that matters, as he has shown he scored a respectable amount of goals.

“I feel if you want something and stick at it then it’s achievable. He’s played in the leagues so he knows what it’s like to be playing back there and I am sure he wouldn’t want to be going back from playing in the Premier League.

“He has kept himself a Premier League striker and I am sure he will have a good career.”

There was some who questioned whether it was a mistake to not pick Bamford for England last season, however, he isn’t far off, another decent finish and a consistent run of quality performances and he could follow Kalvin Phillips in getting in the team, however it’ll be tough after a Euros in which England lost in the final against Italy.

There is plenty to debate with dominic Calvert-Lewin, Ollie Watkins, Tammy Abraham, Danny Ings and possibly Toney, coming into question for Gareth Southgate, especially with the qualifiers soon to begin.

It is not about going up to survive, that is not our mentality.

“For all the boys in the changing room, [the target] is to win the league.

“You have to set targets that scare you.

“That definitely does scare us.

“We don’t know what we will do if we win the league.

But if we set out to do that and fall just short then we are in a good place, we know what is to come, we just cannot wait for it to start now.

Bamford said on being able to help Leeds in the big time in September 2020: “It’s a nice start, hopefully I can keep it up. The main thing is I’m doing my bit for the team. If that’s scoring goals, that’s probably the best thing a striker can do.

“If it’s not that, then it’s doing the other things and whilst it’s tiring, I just try and do as much as I can and hopefully the team appreciate it.”

Leeds went on the finish that season in 9th, and on preparing for a second season in the Prem as well as pre-season just gone, he said: “I think it’s getting tougher every year. It has been hard but it’s been good.

“What we did the first year with Marcelo, things have now grown on top of that so, rather than just be a standard pre-season, we push ourselves to get better.

“Normally you can come into pre-season and be a little bit off it and, by the end of pre-season, you’ll be ready. Here, you have to do a lot in the off-season to make sure you can start at the base you need to here, which is also important for reducing injuries.

After bagging 17 goals and seven assists, Bamford said that in hindsight of missing and England call up, he may be thankful for the short rest before hitting up the intensity again.

“I think I had two weeks doing nothing,” he continued. 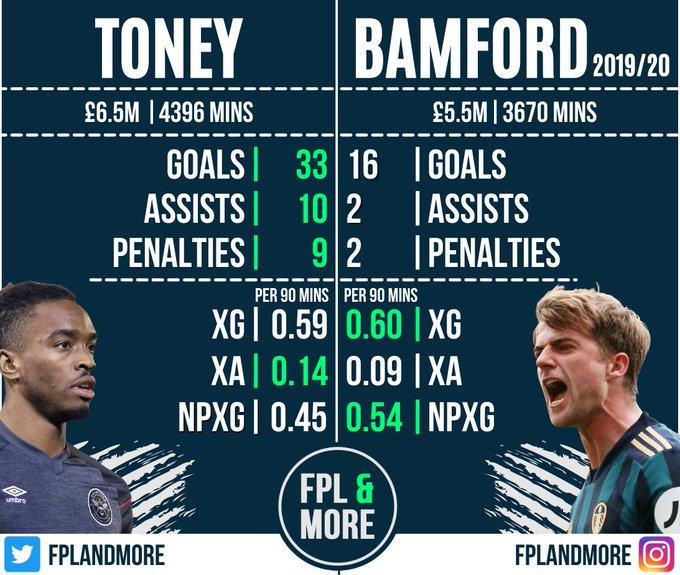 “After that, I stepped it up week by week with the gym and running.

“We obviously do murderball which is a good level of fitness, but it’s not the same as playing 90 minutes in a game.

“I feel like there’s nothing that can really replace that, so it’s important to get a few games under your belt before the season starts.

“It’s important because, in the Premier League, you’re playing against arguably the best teams in the world.”

It will be interesting to see how both Ivan Toney and Patrick Bamford get on this upcoming season. Can Bamford have another successful season? Will Toney make the step up and cope with life in the Premier League?

Both will be expected to shine for their clubs, and who knows, we might, just might, see either or both of them at some point get awarded an England call up if impressive enough. Go smash it lads.