“I’m an ex-Premier League star now making a living selling condoms – there is lots of sex and no rules” says Faustino Asprilla.

Many will remember Asprilla as a footballer full of tricks thanks to his two-and-a-half year spell with Newcastle United between 1996 and 1998.

But the 52-year-old has had quite the career change since retiring from the beautiful game back in 2004, and is now in the CONDOM business and is loving life. 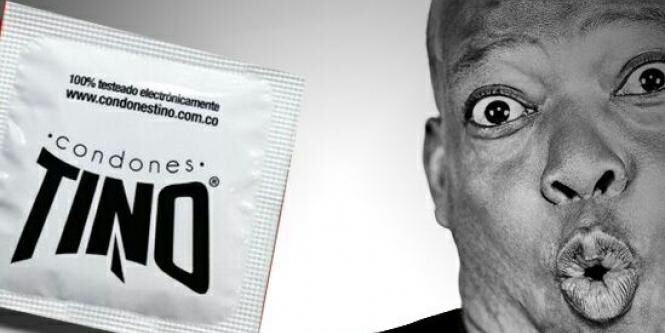 Aprilla first started selling flavoured condoms back in 2016, and has had success doing just that with sales still doing well since launching six years ago.

In a recent interview with Italian newspaper La Gazzetta dello Sport, he revealed how couldn’t be happier with how his life has turned out.

The Colombian said: “Football for me has always been fun. No rules, no schemes.

“How am I doing nowadays? I’m excellent.

“I have a farm, I sell sugar cane to the Colombian government and through an advertising campaign I sell condoms.

“You know, sex has always been important to me. I am Asprilla: lots of sex, no rules and pure life.” 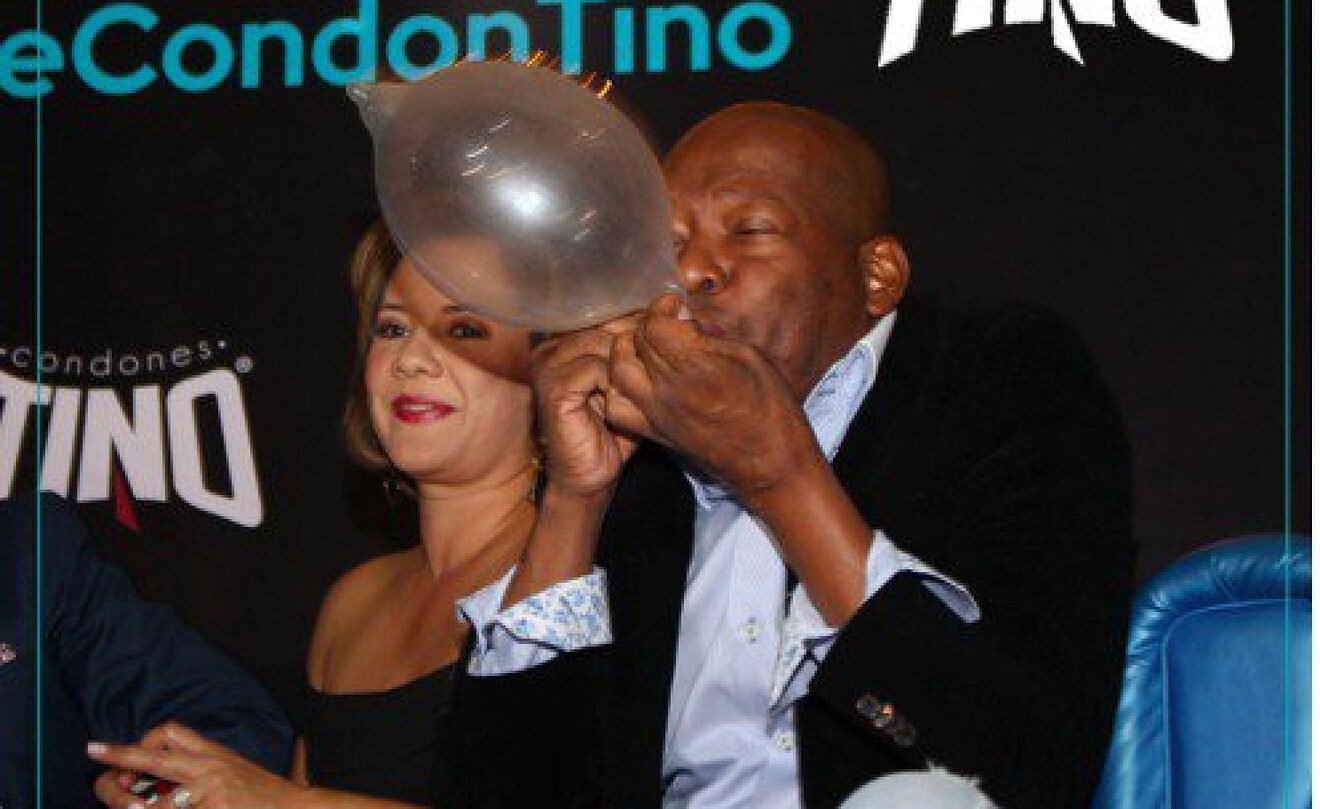 In 2020, Asprilla revealed that he had 3.5million of them in stock to help fight a reported global shortage at the beginning of the Covid pandemic.

“Here at home I have a whole load of condoms which I want you to help me use, because it is really difficult for me to use all of them,” Tino stated in a video released on the former player’s official Twitter account, in response to an article revealing the shortage.

“Filling up with kids and bringing them into the world with this virus is not on. So I am giving you a link through which you can get hold of these Tino condoms at a very reasonable price.

“I will let them go at more than half price so that you can have some protection at home: soap, washing your hands, and what could be better than condoms?”

The idea to sell condoms first came about when photograph of Asprilla accidentally flashing his privates while playing a match for Colombia in 1993 made international headlines. 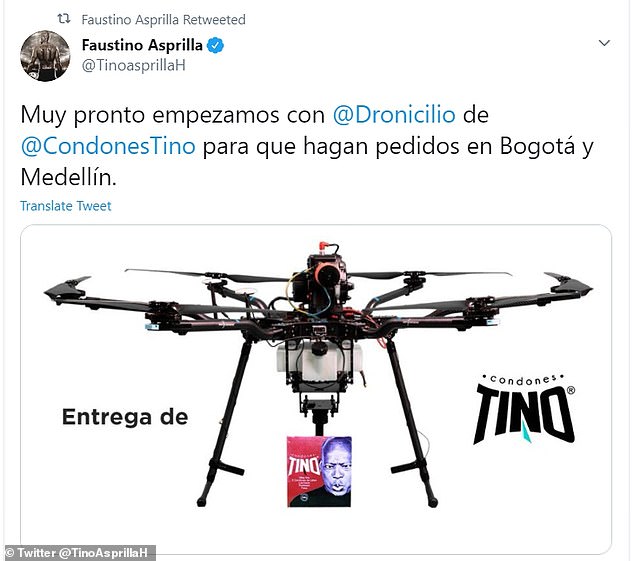 After a training session at Durham’s Maiden Castle, Newcastle’s players waited for manager Kevin Keegan and his assistant Terry McDermott to join them on the team bus, which was surrounded by a multitude of Magpies fans. While they waited, the eccentric Asprilla took the opportunity to entertain his team-mates by sharing some raunchy footage for the most remarkable reason.

Ex-Newcastle defender Steve Howey told Under The Cosh: “Tino just thought it was a good idea for the lads as entertainment to stick one of his videos on. The week before, he put some music on and it was this Latino Colombian stuff and Shearer went down the bus when we were travelling down the A19, ejected it and turned round and went, ‘Asprilla, s***!’ He opened up a latch and winged it down the A19. So Timo just thought, ‘I’ll spice it up a little bit’.

“So he brought this video and Ken the driver put it on. We were all set, we were waiting for Terry Mac and the gaffer. Can you remember the videos when they used to put them in, it would go fuzzy and then the picture would come up. Anyway, we were battering Timo – ‘What the hell his this? Get this s*** off!’ and it had even started. And he goes, ‘No, you must watch’.

“The camera just focused on these high heel shoes. It panned out and then you see these long legs, stockings and all this silk underwear, a silk dressing gown. We were looking at each other, thinking, ‘No, surely not’. We’ve identified it straight away.

“Of course there is this dodgy music getting played and it was in this magnificent villa, marbled floors and all this kind go thing, she’s looking out, and she’s comes out – an absolutely stunning woman. And you just hear a knock on the door. She walks across the marbled floor – high heels shoes on, stockings, all the gear, and opens the door.

“There’s a geezer standing there. He’s got this big bushy beard, white t-shirt on, jeans with big buckle belt with all these tools and stuff. We were thinking, ‘What’s going on here?’ And literally, before you know it, these two are getting right into it and she is screaming the place down.

“The bloke is absolutely battering her. You’ve also got to picture that fact that we have got hundreds and hundreds of people around the bus and they can see the TVs. So this woman is screaming the place down because this bloke is going for it hell for leather and you can see the husbands, the boyfriends, the wives, the girlfriends, the kids – the husbands are trying to move the wives and kids out of the way by trying to look, thinking, ‘What on Earth are Newcastle players looking at pre-match before they go down?’

“Anyway, Kevin is just about to eject this when Timo comes running down the bus saying, ‘No, no, no. You must keep this on – this is my new missus!’ It was his new girlfriend and that was his way of introducing the lads to her!

In 2007, Asprilla took advantage of an offer to appear in SoHo magazine.

In the piece, Asprilla appeared wearing a pair of angel wings and, well, nothing else with his privates blurred out.

In 2013, Tino was offered 20 million pesos (around £6,500) for a one-week contract with the adult film industry, with producers becoming “convinced that with a little training you could exploit another talent all of Colombia knows you have.” He went on to turn down the offer. 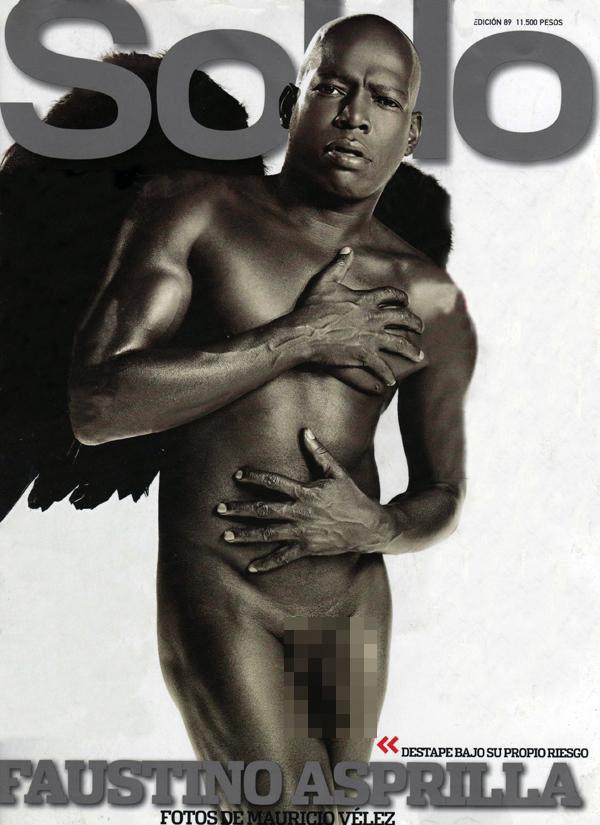