More matches up and down the country has been postponed due to the impact of the storm which has been leaving grounds damaged and underwater.

EFL’s midweek fixtures were the first to be hit, with Swansea City’s Championship game against Bournemouth on Tuesday postponed with the Welsh club citing “safety reasons” after storm-damage at their home ground.

The club say neither a full assessment of damage at the Swansea.com Stadium nor the necessary repair work can be sorted in time for kick off.

The decision was made “following an inspection by the licensing authority and club management”.

It is understood Swansea are confident the damage will be repaired before their next home game, against Coventry City on Saturday, 5 March.

In their statement, Swansea said: “A rearranged date for this fixture will be announced in due course.”

Fleetwood’s League One game against Sheffield Wednesday on Tuesday is also off due to storm damage. 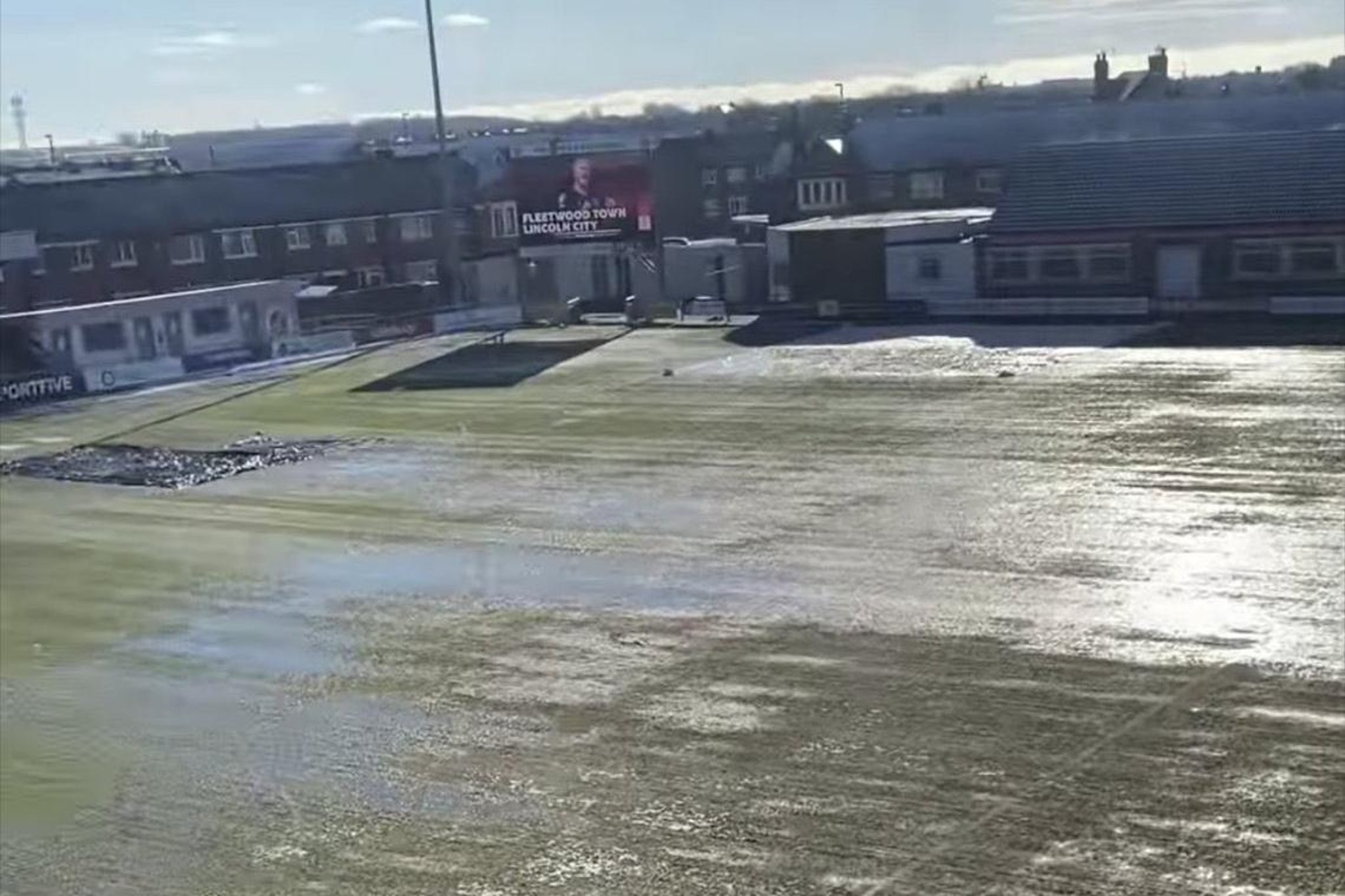 The Cod Army said via their website: “Fleetwood Town can confirm Tuesday’s Sky Bet League One fixture against Sheffield Wednesday has been called off following storm damage to the stadium overnight.

“The game has had to be postponed due to safety concerns after the high winds over the last 48 hours have caused structural damage to the Parkside Stand.

“All tickets, including those in hospitality, will be transferred over to the new arranged date which will be announced in due course.”

LATEST POSTPONEMENTS (updated from the top):

Storm Franklin prompts amber and yellow weather warnings with “very strong winds” forecast for most of the UK, hundreds of flood alerts issued, trains cancelled and people advised not to travel.

It seems Storm Franklin could begin to subside this afternoon, but a number of flood warnings still remain in place.

– Scotland – four warnings and three flood alerts have been issued.

Thousands of homes in the UK are still without power due to Storm Eunice, and Storm Franklin is complicating recovery efforts.

UK Power Networks say they are working as “quickly and safely as possible” to restore power to people who have been without it since Friday morning.

Our reporter @NatalieAHiggins is at @TadcasterAlbion’s ground which has been devastated by the flooding.

Speaking to Kay Burley on Sky News on Monday, Met Office meteorologist  Alex Deakin said: “We have never had three in a week, last Monday we named two in the same day – we have never done that before either.

“It’s been a very active week for the weather and we are seeing further impact from these storms this morning.”

He goes on to say that Storm Franklin has brought “really strong gusts” into Monday, especially in Northern Ireland and areas that weren’t as badly affected by Storm Eunice.

“Each storm is different, each of these three storms has affected different parts of the UK in different ways but each of them combining some pretty serious issues as they move across the country,” he said.

Talking about Storm Eunice, Mr Deakin added: “The winds we were predicting came to fruition… and I think one of the things that meant we were didn’t have as much disruption perhaps is we named it on Monday and gave people four days notice.

He added that getting three storms back to back is “likely to increase problems” but he said the weather will be “calming down after today”.

CrossCountry have joined a number of other train networks in advising people not to travel during the storm on Monday and potentially Tuesday.

The service follows South Western Railways and Southeastern which told passengers not to travel, saying that alternative transport will not be provided for them if routes have to close.

National Rail has warned anyone making essential journeys once services resume to expect “major disruption” to routes “across most of Great Britain” – including cancellations, delays and slower speeds onboard.

It said the following companies are affected by weather-related disruption.

South Western Railways had advised passengers not to travel today.

A number of other train operators have also issued warnings.

Southeastern has also told passengers not to travel, saying that alternative transport will not be provided for them if routes have to close.

TransPennine Express said passengers should avoid travel if possible, especially those planning to travel north of Preston before 10am.

Great Western Railway also said passengers should only travel if absolutely necessary, with services expected to be “significantly disrupted”.

Chiltern Railways said speed restrictions will be in place with a “high chance” of delays and cancellations.

National Rail said: “The poor weather conditions may cause flooding, and any trees already weakened by Storm Eunice may fall down.”