Harry Kane gets brutally mocked by Aston Villa fans with a chant directed at him as Tottenham got a much needed win on Sunday afternoon.

The England international failed to get on the scoresheet as his torrid time in the Premier League continues, and with that in mind, he was given some advice from those watching on in the stands.

Despite picking up all three points, it wasn’t an easy contest for Spurs, Pierre-Emile Hojbjerg scoring the opener in the first-half with Ollie Watkins equalising after the break. 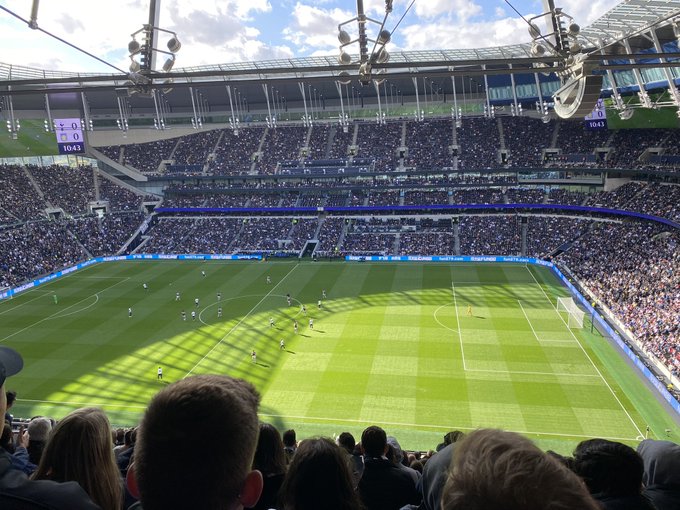 But it took just mere minutes before the home side took the lead once more when Matt Targett diverted into his own net following some sensational play from Heung-min Son.

Kane had a tough time while the Villa fans were savage in their mockery of the striker by alluding to the transfer of their own Jack Grealish, who left for Manchester City, and the Villa faithful could be heard saying at the top of their lungs: “You should have f****d off with Grealish.”

During the summer transfer window, Kane was heavily linked with a move to the Etihad and it was well publicised that he was tried to push for a transfer, failing to attend training for a number of days.

However, it failed to transpire and the Englishman is seemingly forced against his will to stay with his boyhood club.

It has been a slow start to the season for the 28-year-old, who has yet to score in the Premier League but has had more luck in other competitions.

In the Europa Conference League, Kane netted a hat-trick against Mura after coming on as a second-half sub.

The striker took to social media after the result by tweeting: “Important we responded to last weekend with a win. Great energy and belief from the boys.”

On the win, Nuno told Sky Sports: “Good, good, good. We needed a win but a well-deserved win. We did a good match against tough opponents. Important for us, the boys and the fans. We reacted well after conceding and positive in a lot of ways.

“The boys did well. Villa are a very good team with the press so it was about taking risks. Our front three were always in the middle. They played well.

“Many time we conceded and go flat but this time the team did well. We missed chances to kill the game.

“All the players did well, we have talented players and when they are confident, they are unstoppable.”

The former Wolves boss was asked about Kane’s performance, and he was keen to say he believes his talisman will find the net in the league soon.

“He worked very well for the team. It [the first goal] will come,” said the 47-year-old.

“We are aware we have been through a tough moment. When the players gel and combine they can do very well. We have to find the balance between the defensive and attacking part of the game.

“This is our focus, what can we do to improve?”

Tottenham will take on Newcastle after the international break with Steve Bruce also under pressure.

@julie10wales: Villa fans….. never forgotten them ——- singing happy birthday on Spurs 125 anniversary celebration when we were 4 – 1 down.

@carzoso14: They’re right! He was f-ing shite today! And has been all season! Heads not in it at all!

@Gregskii3: he did try tbf

@LilyWhite_TV: Tottenham 🤝 Villa. Being fucked over by their star players

@DeBlueLou: Villa and fans are still obsessed with Grealish instead of focusing on winning 🤷🏼‍♂️

@lnvertedWinger: He really should’ve. The weak link in our attack.

@HoliH1: My son’s friend is a Spurs fan and he just texted my boy from the match, to say Villa fans have the best chants 🤣

@ardorford: ouch but this better motivate him to score

@EITorero: Yeah he should have, don’t want that prick here

@thfclp__: Facts. Another unconvincing performance today but he got his hat-trick in Europe’s third rate competition midweek so we’ll let him off! 💪

@ForeverAYellow: Loving lighthearted chants such as this, least Villa fans didnt lose their sense of humour despite seeing their team losing lol