Gary Neville slams Priti Patel over Home Secretary’s tweet after England picked up an easy victory against Ukraine on Saturday.

The Three Lions booked a place in the semi-finals of Euro 2020 with a five-star performance at Stadio Olimpico, with Harry Kane scoring in either half and Harry Maguire and Jordan Henderson heading in from corners.

It was another display which exhibited the togetherness in Gareth Southgate’s squad, however fans and politicians have not shared that same unity at times throughout the tournament. 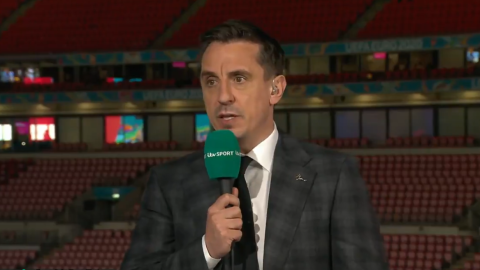 This is due to the fact that there have been disagreements over England players taking the knee before their fixtures, despite Southgate explaining it is simply an act in support of racial equality.

Before each of England’s group and last-16 matches, a minority of the Wembley crowd booed as players took the knee, although cheers and applause largely prevailed.

Priti Patel is among those to criticise taking the knee and labelled it an act of “gesture politics” last month.

“It’s all well to support a cause and make your voices heard,” she told GB News. “But actually, quite frankly, and we saw last year in particular with some of the protests that took place, I speak now very much from what I saw in the impact on policing, it was devastating.

“Not only that, I just don’t subscribe to this view that we should be rewriting our history, pulling down statues, the famous [Edward] Colston statue, and what’s happened there [in Bristol].

“Asked if fans were within their rights to boo players taking the knee, Patel responded: “That’s a choice for them, quite frankly.”

As such, Neville blasted Patel after she posted a tweet celebrating England’s triumph over Ukraine which said: “What a performance. What a team. #ItsComingHome.”

The former Three Lions right-back simply wrote back: “The cheek of you!” in a tweet which has seen over 44,000 times press the ‘heart’ button.

“The Prime Minister respects the right of all people to peacefully protest and make their feelings known about injustices,” said a Number 10 spokesperson.

“The Prime Minister wants to see everybody getting behind the team to cheer them on, not boo.”

Meanwhile, Leader of the Opposition Sir Keir Starmer said taking the knee is “a choice for each team”.

He added: “I profoundly don’t think you should boo your own team before kick-off.”

@mford84: She didn’t say she didn’t like the football team, just the taking of the knee before every game like the rest of us.

@JasonJaydee76: If you constantly talk about politics then she has every right to talk football. The cheek of you

@JohnnyHarris91: Can she not want to agree with off field issues and not want the side to play well. The pettyness of people these days when they don’t agree with someone’s view is hilarious

@PropFreeLFC: Pettiness? She wanted them booed for their ON field behaviour lol

@Kevmcguinness1: No. Most of us are against those who are against it. We even gave them a name. Racists.

@JohnMcMah0n: £400 for a ticket to the semi finals of the euros Gary. Can’t wait for you to let UEFA know how greedy they are when you’re on telly before the England game against Denmark.

@SeanLQuinn: Don’t be silly Neville only says things and pushes his narrative to benefit his current employers, Sky and his former club, Man Utd!

@samuelgallaghe2: Ask her how she thinks the England team would look applying her anti immigration policy to it, the cheek indeed. Told folk to boo the team last week and now suddenly wants in no sweetheart it doesn’t work like that

@DowleBFC: Good on you Gary for calling her out!

@Hadenwoof: Shameless isn’t she – but track record always gave us a clue 🤷🏻‍♂️

@UnevenStephenx: When you have zero morality it’s easy to be shameless.

@markak31: If she’d had her way some of those players wouldn’t be playing for England, they’d have been deported!!

@Dutchtica: “The cheek” is an understatement. I know a body part or two that are way more applicable

@Lufcmuslims: Love @GNev2 says how it is, shoves straight down @pritipatel throat, is there a more hated and sinister politician in the England?

@PlayersTrombone: “The cheek of you!”, says Gary ‘Too much greed in football, how dare they be so greedy, I’m bored of this £73m Sancho deal, where’s the next one?’ Neville.

@s_a22510: Says one of the biggest hypocrites in football

Gary when he sees Priti pic.twitter.com/Jw4ddTuWHj