Gary Neville fumes at the Glazers as Man Utd struggles in their battle with Brentford in their attempt to sign Christian Eriksen.

The former captain has called on the Glazer family to pump “every penny” that the Red Devils make back into the club amid their ongoing interest in the Danish international.

As reported by the Manchester Evening News earlier this week, the soon-to-be free agent is one of five signings that the Old Trafford outfit hope to make before the transfer window closes in September.

Manager Erik ten Hag has big plans to transform the Reds’ fortunes but will be unable to do so without new recruits.

Eriksen, who is out-of-contract at Brentford on the 30th of June, and is a player that Man Utd have made a target, claiming him can make a difference to their midfield options.

His impressive performances have sparked interest in his services from a number of European clubs, however, Brentford, are keeping hopeful of retaining his signature, with the midfielder currently mulling over his options.

According to Sky Sports, the attacking-midfielder, who is vastly experienced in the Premier League following seven years at Tottenham, is currently debating whether to stay at Brentford or complete a move to Man Utd, with the latter said to have reportedly offered him a more a more ‘financially lucrative’ deal.

It appears as though Neville is feeling rather meh by the prospect of his old side adding Eriksen to their ranks, suggesting that signing a player on a free transfer is not something the club should be considering. Instead, he has appeared to suggest that the club should be splashing the cash. 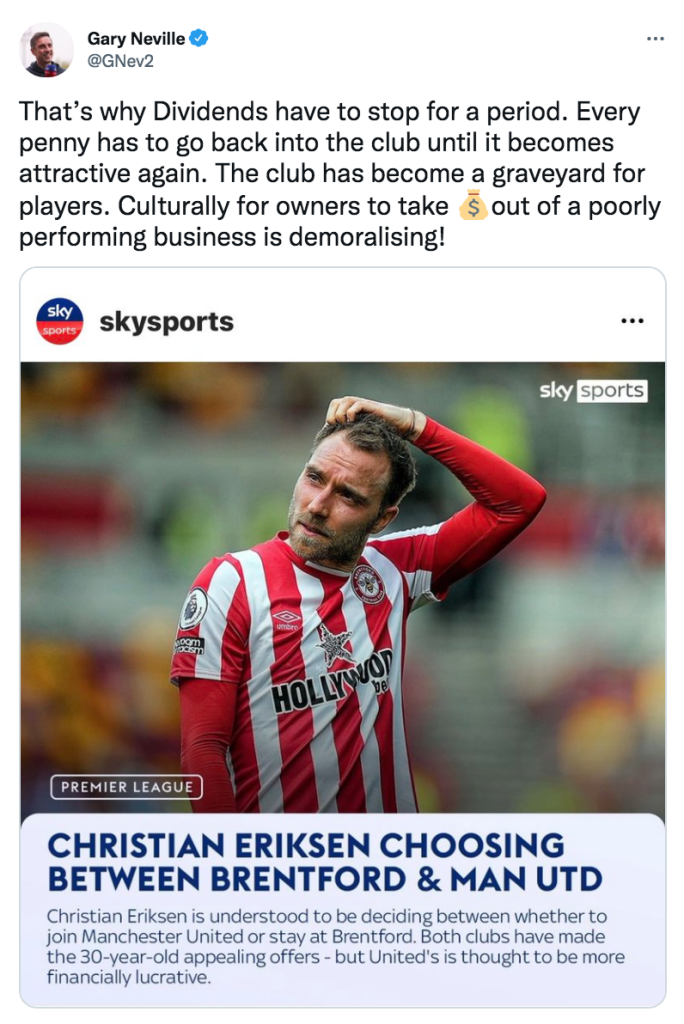 On Twitter, Neville, who had uploaded a screenshot of Sky Sports’ story about Eriksen, said: “That’s why Dividends have to stop for a period. Every penny has to go back into the club until it becomes attractive again.

“The club has become a graveyard for players. Culturally for owners to take [money] out of a poorly performing business is demoralising!”

Eriksen scored 52 goals in his Premier League career and is just finding his feet again, impressing for the Bees considering initial concerns he would never play again.

Reports say he would add a wealth of talent and experience to United’s midfield, even if bringing in an attack-minded midfielder is not Man Utd’s leading priority this summer. Yet he would be a suitable replacement for the outgoing Jesse Lingard and Juan Mata.

Neville wrote on Twitter last week: ‘The Glazer Family should NOT be taking £11m in dividends this Friday. It isn’t right with the investment needed in the team, stadium and training ground.

‘The clubs cash position is low compared to previous years. An announcement is needed to halt it for the next 3 years minimum.’

The club’s financial report, which was posted last month, showed that the club’s net debt had gone up by £52million to £496million. In total the club’s debt now stands at £591million.

Then in April after defeat to Liverpool, Gary Neville said: “It would be easy to launch into the players and I’ve done that enough, because they have to take responsibility.

“You can sometimes point towards the managers that Manchester United have had this season, but you have to start looking above when you see repeated failure over a 10-year period.

“They (the Glazers) are taking dividends out of the football club. No good business, when the core activity of that business is failing miserably, when the cash has been depleted over the last three years to the levels that it has, continue to take money out.

“Yes, maybe when the club’s rich, it’s winning, there’s hundreds of millions in the bank, the sponsorship contracts are coming in, there isn’t Covid and the stadium’s absolutely amazing, you might say, ‘OK, the owners can take a dividend’. Not today.

“I’m a capitalist, I’m an entrepreneur, I’ve got businesses, I understand the theory of borrowing and lending money, and taking money out of a football club. But not when the business is on its knees.

“The culture is set from the very top. There’s something rotten. This has been 10 years of poor decision-making, of repeated failure, of lack of investment into the stadium. They’ve invested into the football team, I’ll give them that, but not with their own money.

“This Manchester United team disappoint you on a consistent basis. Their performance levels are as bad as I’ve seen in my life, and that’s from the very start of the season to the end. They’ve won games and they’re on the points they’re on, and I don’t know how because there is absolutely nothing to hang onto, other than individual moments and players who sometimes turn up.

“There is nothing here. Ole Gunnar Solskjaer did a pretty decent job for the previous two or three years, Ralf Rangnick knows how to set up a football team, but they’ve both been totally defeated by this group of players.

“You’ve watched those Manchester United players all season, blaming each other, blaming the manager, not clapping the fans. You’ve seen the owners not turn up. The culture of every club is set at the top.”

“This is a significant 24 hours in the future of Christian Eriksen. It’s a fascinating story as Eriksen is deciding on two options. One is Manchester United, the second is Brentford.

“It’s strange to think that 10 years ago, United were challenging for Premier League titles while Brentford were in League One preparing for their first game of the season against Bury.

“They’re now competing in the same market for the same player. Both offers are fair, respectful and decent.

“Eriksen is really in a head-or-heart situation, weighing up the pros and cons of joining both clubs. He worked with Thomas Frank as a youngster and had a hugely successful spell there, keeping the side in the league.

“He was the heartbeat of that midfield. Brentford fans would say without Eriksen they could possibly have gone down. That’s how influential he was at the back end of last season.

“There’s a loyalty to the football club after everything that happened to him a year ago but then you have one of the biggest clubs in world football rebuilding their midfield.

“In Erik ten Hag, there’s a nice connection as Ajax allowed him to train with them during his recovery.”

@PatrickLewis123: Glazers have built the most expensive squad in world football – all you and United fans do is complain. Show some gratitude.

@MerelyDarren: Gary, with the greatest of respect, why don’t you pin your flag to the mast of @The__1958 and get the Glazers out. There’s no money available for OT rebuild or redevelopment of Carrington, so they must go. Why won’t you assist in that?

@AmBigSerge: It’s not just transfers it’s debt, the stadium is falling apart, academy and training facilities are subpar, they’re actually killing the club to serve their own pocket. We are one VERY few clubs that has owners who take dividends. Something BIG has to give soon! #GlazersOut

@bravehartley: Surely he wants to be at a club who have potential, who are moving in the right direction, have the greater chance of winning a trophy and play the most attractive football? Staying at Brentford is a no brainer.

@mickmcmenemy: Mate stop going on about it will ya, 11million to us and the glazers is pocket change these days, constantly tweeting about it ain’t gona make the glazers change there mind or gona be the difference between us signing and players and not signing them

@utdnuge3: Except it isn’t pocket change when it comes to investing money into the club and spending in transfers. Taking 11 million out whilst reportedly haggling over 10 million euros for De jong is ludicrous

@JazWiseman: Brentford gave him the opportunity to return to top flight professional football when no one else would touch him. It would be decent of him to stay loyal to them as opposed to looking like a mercenary.

@Whodehellisthat: Why weren’t you calling for them to not take dividends for 10 years+ gal?

@tysonra: Not only dividends been an issue, the strategy is to let other clubs purchase the best players so @ManUtd do not have to spend alot. They will say there was no good players available. Look at how clubs that are too of their game handle transfers. 😳

@Proc70: Behave Gary. The glazer ownership is completely unwanted, that’s a given. But loads of money has been pumped into dud signings, renewal of lucrative contracts for sub standard players and the cherry on the top, 3 years of a manager completely out of his depth

@TomK___: Throwing money at players who aren’t sure if they want to join the club has worked well traditionally

@Ra1Hai: Exactly what I’ve seen saying Gary. No business pulls out dividends when the core business is under performing. It’s not a sustainable model.

@marks_gav: Taking £11m out hasn’t been the problem, Utd have just spent big money on poor players! £50m AWB, £80m HM, £90m pogba, list is endless, since Ferguson left only one singing has been a hit and that’s Bruno and even he’s been questioned now! Poor decisions not lack of finances

@AndrewMinett1: Guy considering staying loyal to a club that gave him a route back into football after he almost lost his life and no one else was willing to give him a chance. But of course MP Neville is using it to have a dig at the Glazers 🤦‍♂️

@daveandoson: Why would a business that is making money stop paying dividends to their shareholders? What gives you the right to comment on how a club is run? You’re just pumping money into Salford and sitting in League Two. What do you know?

@lukeparr105: People saying £11m is 🥜 this isn’t about the money. It’s the principle, shareholders should take dividends out of profits made. You don’t take a reward out of a under performing ‘business.’

@Kennyllorente: United have a net spend of £903 million over the last 10 seasons spending lots on wage as well. What do you mean put the money back in the club, you’ve spent shed loads.

@MikeLUHG2: You spent 3 years supporting a manager that threw our fans under the bus for protesting against them. Bit fucking late to be piping up now pal. Hope this helps

For a period? It has to stop. And all the money they’ve taken out should be put back into the club.

Summer 2010 SAF was sat there saying there is no value in the market while the glazers were taking out 266 MILLION… from the club. pic.twitter.com/DD5H7I2spw