Gary Lineker surprises fans by making emotional announcement – though it does come with a positive for him and his family.

The former England player has revealed that he has quit BT Sport to follow his beloved Leicester City in Europe next season with his sons, something he hasn’t had the opportunity to do so far.

Lineker, 60, announced the decision on Twitter this evening after joining the channel in 2015 to present their live Champions League coverage.

This weekend’s European Cup final between Manchester City and Chelsea will be his last with the broadcaster.

“I’ve loved hosting the best club tournament in world football and I’m genuinely proud of being part of their truly groundbreaking coverage over the past 6 years.

“I would like to thank BT Sport for the generous renewal offer, but after much thought, I have decided to call it a day.

“I feel it’s time to do things that I’ve always promised myself I’d do: such as follow Leicester across Europe with my sons (how many opportunities will we have?).

“A big thank you to everyone at BT Sport, both in front of the camera and behind. You’re one hell of a team.

“It’s been a joy working with you. Well played.”

The lifelong Leicester City fan has four sons from his marriage to wife Michelle.

He scored a total of 95 league goals for his beloved Leicester between 1978 and 1985 before moving onto Everton, Barcelona, Spurs and Nagoya Grampus.

He will continue in his role for the BBC where he has presented Match of the Day since 1999.

The side, who won the Premier League in 2016, will compete in the Europa League next season after finishing fifth, one point behind Chelsea in fourth.

Rio Ferdinand, who appears as a pundit on BT’s coverage, replied his support to Lineker.

He tweeted: “Been an honour to share the stage with you! One more Last Dance (Until this summer),” along with a laughing emoji, referencing their upcoming work at the European Championships.

Lineker responded: “Cheers Rio. You’re a delight to work with.” 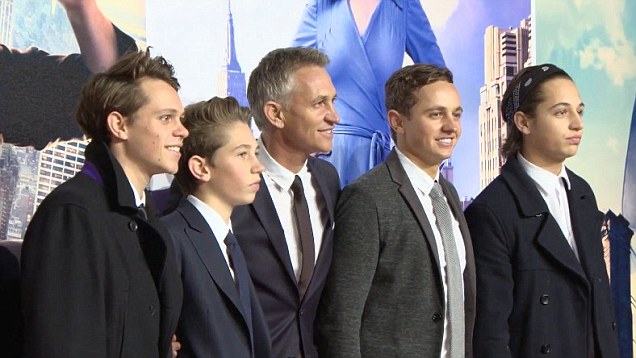 @marrakoosh: Amazing to travel for football and with your boys. Congrats and all the best.

@richgooner1886: Only decent thing about the BT coverage. Shame.

@GlenWorrell: That is a great reason to drop the job. Enjoy the travels and look forward to West Ham v Leicester final next season

@lacbeckett: We will miss you but what a great European tour you will have. At least you’re still on MOTD x

@J_Langston_NUFC: So much respect for this…. I really hope you get to the final and see it all!

@ClausFromHolte: Enjoy the ride across Europe. I hope they will open up for away fans in Europe after the summer holidays. I’ll buy you a pint if Leicester is paired with Brøndby in the Europe League Group Stage

@CliveGarner: U will enjoy following Leicester across Europe Gary if my trips to Bruges, Copenhagen, Seville and Madrid were anything to go by last time ! Didn’t go Porto but that was good as well by all accounts! Superb trips full of Leicester fans

@smord84: Brilliant to see – away matches with your parents are some of the best games you’ll ever do.

@TomHuelin1: Good on you Gary. What better reason to call it a day! Enjoy the nights off.

@KStandWaz: BT’s presentation will be poorer for it.

@AndySleight999: Good for you. Glad you have your priorities right. Hope that you enjoy a long and enjoyable journey and that it is just the first of many under Brendan Rodgers.

@tommywalkerco: Well done Gary. As a Boro fan, we got to Europe for a couple seasons 15 years ago, and the. sacrifices were made for me and my family to witness those golden times for us! So I can understand the priority for you to follow the Foxes! Good job

@PaulSpiers3: Gary – I share the same goal and will hopefully follow Leicester in Europe next season.. Supporting your own club, with family, provides so much satisfaction especially when it’s an opportunity that is rare. Up the City!

@Son_Lyme: Good for you Gary. Enjoy.

@hazza_lines: Your presence on the show will be missed. You make it look so effortless, had a wealth of experience to give great opinions and knew how to interact with the footballers on the show to get the best out of them. Enjoy yourself

@JackWhitman_7: Committing your time to the Foxes and Family, doesnt get better than that Gary!

@SimplyMarceI: Nooooooo Gary…. I will miss watching you on the big Champions League nights…. It will not not be the same

@WhatJayDidNext: You’re a fantastic broadcaster Gary. May luck be on your side ~ and Leicester’s ~ wherever you may go. Enjoy x

@pamela_cafc: Family is everything in life. Great decision to make..

@fkhanage: My best wishes to you all, Gary. Best in the business!

@dougalwat: Gary – I think you’re the best football show host I’ve ever watched. You will be missed. All the best and I hope to see you back in front of the camera again someday. Cheers, Doug.

@RoryFitz9: Well done you deserved top billing for the big shows 👏 Good luck with following The Foxes next season. BT will be doing decent to find a comparable anchor during this transfer season, but at least they have the carrot of Champions League football to offer 😉

Best of luck to Leicester I hope they go far in the tournament so you get to make as many memories as possible. pic.twitter.com/Rv86wlbQEW