One particular football pundit has been suspended by the BBC for what he said during a League One game in midweek, it’s reported.

Former Lincoln player and manager Steve “Tommo” Thompson described an incident in the recent clash between Swindon Town and Lincoln City as “handbags”, landing himself in hot water with the broadcasting giants.

The 65-year-old, who works as a freelancer, has been laid off for the rest of the year after complaints from listeners about the outdated phrase.

Thompson made the comment on BBC Radio Lincolnshire during Lincoln City’s 1-0 win at Swindon Town on Tuesday, taking the Imps 3rd in the League One table.

Explaining their decision, the BBC said the phrase “handbags” was not in line with their standards.

The broadcasting giants said: “After listeners raised concerns, Steve acknowledged some of his comments on air didn’t meet the standards we expect.

“He is taking a break but will be back in the New Year.”

However, several fans are campaigning for his reinstatement, insisting there is nothing malicious behind the intent.

Marcus Greatorex said: “It’s just an old term. The BBC should pay more attention to songs on their stations promoting knife crime and drug use.”

“I can’t begin to think who’d be offended by it. The BBC has lost touch with the public.” 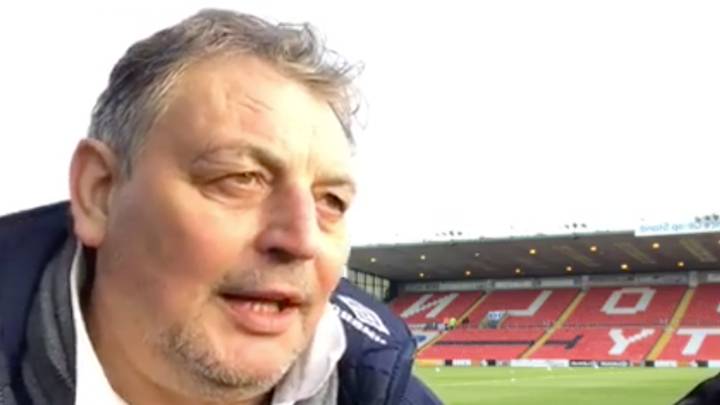 The term appears in the Collins Dictionary as “an incident in which people, especially sportsmen, fight or threaten to fight, but without real intent to inflict harm”.

The BBC said: “After listeners raised concerns, Steve acknowledged some of his comments on air didn’t meet the standards we expect. He is taking a break but will be back in the New Year.”

The Sun says: The BBC has been in the grip of “woke” madness longer than almost anyone.

But dropping a footy pundit for calling an ineffectual on-pitch scuffle “handbags” is a new level of foolishness.

Who exactly is offended by this term, so common it’s in the dictionary?

No one outside the imagination of hyper-sensitive producers.

The BBC is growing more distant by the day from the public whose licence fees it needs.

It’s one own-goal after another.

The BBC recently were criticised for announcing that Radio 1 will play an alternate version of The Pogues and Kirsty MacColl’s ‘Fairytale of New York’ this year as some of its listeners may be offended by the original.

The song has previously sparked debate over its use of the homophobic slur ‘f*****’ as well as the word ‘slut’, with many thinking the outdated words need to be ditched.

This year, Radio 1 will be playing an alternate version which will still feature lyrics sung by Kirsty MacColl – with the BBC saying that younger audiences could be particularly sensitive to the original.

The new version will replace the lyrics ‘you cheap, lousy f*****’ with the words, ‘you’re cheap and you’re haggard’.

It’s also believed the word ‘slut’ will be muted.

BBC Radio 2 however will play original version of the song, while 6 Music DJ will have both options available, according to the broadcaster.

A spokesperson for BBC told LADbible: “We know the song is considered a Christmas classic and we will continue to play it this year, with our radio stations choosing the version of the song most relevant for their audience.”

The BBC have also banned sports commentators from using “racist” phrases including cakewalk, sold down the river and nitty gritty.

In an ‘avoiding racial bias’ training session, commentators and co-commentators were given a list of terms that must be avoided.

In an online training session staff, were instructed to stop using “pace” and/or “power” to describe black players.

This is because it can be deemed as racial stereotyping.

A guide was sent out to attendees which read: “Is there a danger of spreading a perception that black players’ success is purely based on their athleticism and doesn’t require hard work and intelligence?

“Do you need to spend more time thinking about how to explain the variety of reasons for a black player’s success?”

Others such as uppity, blacklisted, black mark and whiter than white were also included in the list of phrases to avoid – with explanations of the racist connotations and possible alternatives provided.

Unbelievable to get stood down for saying the word handbags, what sort of people actually take the time to complain 😩

Just think, there’s people in the world who genuinely get upset by the term ‘handbags’ and use the time and effort to complain. How do they function in the real world without crying every two seconds 😆

Another reason the hate the BBC

Disgusting. Lock away the key

No one asked for this.

Surely this is a wind up?

Hasn’t handbags always been a term used in football?

Bunch of snowflakes need to get a grip

BBC should be suspended for all this shite they come up with . Poor bloke, what a disgrace from BBC

Get a fucking grip !

Joke, hate exists wear hate exists, this was a comment, nothing about hate in it.
BBC showing why an increasing proportion or it viewers is losing interest.
Show hate where hate exist and stop fabricating political correct hatred where none was intended.

Pathetic, what is this world coming to? What happened to freedom of speech? You can’t say anything these days, without offending some miserable snowflake c**t! Get a life and bore off! 😡