An incident on the final day of the 2020/21 season sees a Blackpool fan, described ‘heroic’, lose two fingers and a thumb at Bloomfield Road.

Paul Markham, suffered the traumatic experience on his right hand when he picked up a stray firework heading for a group of children.

The 50 year old joined a crowned of jubilant fans with the Pool’s progress to the League One playoffs, facing Oxford United next week. 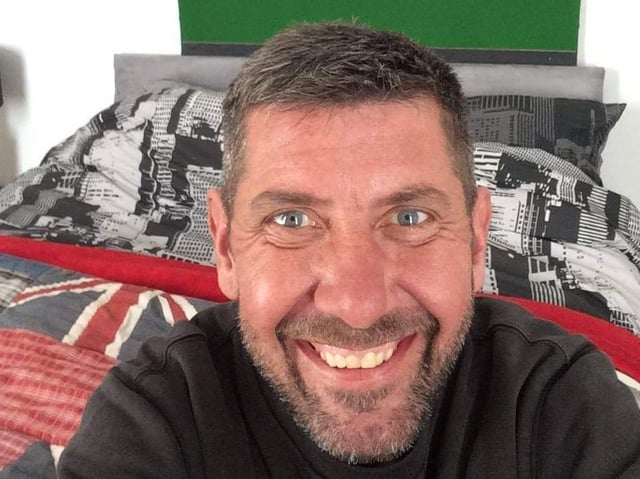 Known to his friends as ‘Speed’ or ‘Speedy’, he was strapped with a tourniquet, a device that is used to apply pressure to a limb or extremity in order to limit – but not stop – the flow of blood, by one friend.

He was taken to Blackpool Victoria Hospital in a car of another on Sunday – before being transferred to Royal Preston Hospital, where he was due to have an operation to try and reattach his fingers.

His future career in the family roofing firm was also unsure. Now details of what happened has been revealed.

“It was an heroic thing to do,” Paul’s dad Billy said. “If that firework had gone off in that group of kids I dread to think what would have happened.

“But I wish he would have stuck to what he said was his first inclination of kicking it away when he saw it rolling towards them along the ground.

“He decided to pick it up and throw it somewhere further away and safe – and no sooner had he picked it up than it exploded.

“His friends have told me there was blood everywhere.”

Billy, who founded the family company Markham Roofing Services, added: “Someone rang for an ambulance as there were none near the ground – although there was a mounted police presence – and one of his mates applied a belt as a tourniquet as another drove him up to the Vic in his car.

“He was transferred to Preston and assessed by the micro-surgery team there and it looks like he is going to be in for a few days.”

Billy added: “It was a dreadful shock and we’re just hoping for the best. The intention has always been for Paul to take over the business from me but I really don’t know how he is going to go on as a roofer with a damaged hand. We can only wait and see.

“I actually suffered similar damage in an accident when I was 16 but I was young enough to adjust. I really don’t know how Paul would go on in this trade without two fingers and a thumb.

Nearly £7,000 has been raised in the space of hours after Paul’s accident with a target of £1,000 initially in mind, which fund-raiser organiser Jay Latham said would “help a friend out”.

Julie Casson wrote with her donation: “What a hero. Every credit for saving those people”, while another contributor, Lynn Ratcliffe, wrote: “What a selfless act of bravery. So proud of you.”

The incident came after a home win against Bristol Rovers, which saw Pool finish third in the League One table with 80 points. Fans huddled outside the ground to celebrate, as they had a few days earlier when the playoff spot was first confirmed.

But one long-time fan said he felt there was no place for fireworks and similar devices at such celebrations.

He said: “It’s just asking for trouble. There are plenty of ways to celebrate without having to turn to fireworks and flares. They are dangerous, as proved by what has happened to Paul. I’m sure all his fellow fans wish him all the very best.”

Police said officers were investigating and yesterday appealed for witnesses to contact them with any information.

A force spokesman said: “Around 1.40pm on Sunday, May 9, a man suffered serious injuries to his hand and arm in Seasiders Way, Blackpool.

“An investigation into the circumstances around the injury is ongoing. If you have any information please contact police on 101 or email 819@lancashire.police.uk quoting log 0345 of May 9.”

To donate to Mr Latham’s fundraiser for Paul, go online to www.justgiving.com/crowdfunding/jason-latham

Kurtis Marsden: Awful thing to happen, all the best in your recovery. Hope the fund helps in some way.

Danielle Slater: Wishing you a ‘Speedy’ recovery mate, what a brave thing you did, so sorry to hear you were badly injured in the process. Get Well Soon!! X

Hevster: All the best, hoping for a good recovery for you. Up the Pool!

Mike Preston: Good luck with your recovery, from a fellow seasider!

Gaz Strickland: All the best

David Jo Gordon: Hope you recover from this brave act

Graciebrackstone: What a hero! Hope you get well soon

Karl Conlon-Parr: Hope all goes well for you. UTMP! 🍊

Kristian: Speed you are a legend mate, I hope they get you fixed up pal x

Paul Edge: So sorry to hear this dreadful news Paul

TGBGE: We are not just a football club, we are Blackpool FC family.