An ex-Rochdale and non league player has been sent to 28 YEARS in prison for raping and sexually assaulting seven females.

23 year old Jonathan Diba-Musangu (aka Johny Diba) of Fernhurst St, Chadderton, met most of his victims through a church in the area of Rochdale where he taught Sunday School and music classes and worked in focus groups for young adults alongside his budding career as a footballer.

The crimes were committed between 2011 and 2017, with detectives from Greater Manchester Police launching an investigation in 2018 following a report of sexual assault. 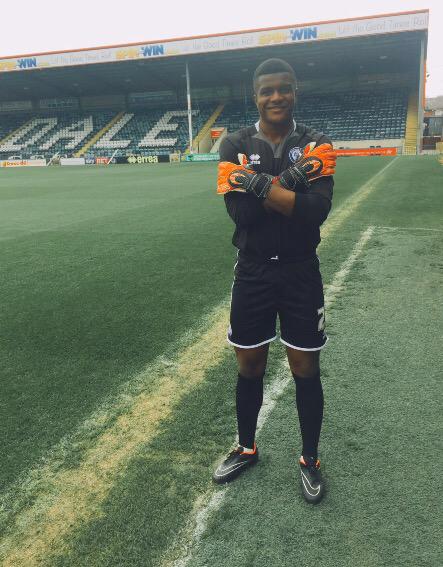 During this period, he played as a goalkeeper for including the League Two outfit, then had loan spells with FC United of Manchester, Glossop North End and Ashton United. In mid October 2018, he signed a semi-professional goalkeeper at Mossley FC. Shortly afterwards that month, detectives arrested him for several offences.

Minshull St Crown Court shockingly heard how in one instance, he raped a seven-year-old girl when he was 14 or 15 years old in the presence of another young boy at an address in Rochdale.

Detective Inspector Julie Maxwell, from GMP’s Rochdale district, said: “It’s taken immense bravery for these victims to come forward and cooperate with us as we pieced together his gruesome acts.

“Diba-Musangu abused his position of power within the church and may have well had a successful footballing career ahead of him before the work of detectives have led to where he is now – behind bars.

“I hope that today’s sentencing provides a sense of justice to the victims and their families and serves as a warning to other offenders.”

Inspector Maxwell added: “I encourage young people who are – or anyone else who suspects a young person is – being inappropriately contacted by an adult ­– whether in person or via the internet ­– to report it to an appropriate adult or agency. This could be a parent, carer, teacher or the police.”

In July 2021, the ex-footballer was seen crying after being found guilty of raping and sexually abusing children.

Musangu had to be carried out of the dock by court staff after falling to his knees in the dock and despite the verdict and his admission, he claimed he didn’t do it.

Despite the verdict and his own admission, he fell to his knees in the dock and cried out: “I never did this, I don’t understand, it doesn’t make any sense” at the hearing.

The hearing had to be paused whilst court staff carried him from the room and another family member could be heard screaming in shock from outside the courtroom.

The Lowry Nightingale Court in Salford Quays heard throughout the four-week trial how Musangu subjected girls to appalling abuse.

One victim spoke on how she had been raped three times by the male when she was aged seven and eight.

Two young girls described strikingly similar accounts of how he led them into a toilet cubicle while claiming they could ‘make up a dance’ together.

He would then tell them to lower their clothing if they wanted to be a good dancer, jurors heard.

In another horrifying episode, Musangu pinned a 12-year-old girl onto a bed and raped her on the day of her school prom after she refused to have sex with him.

He then took photos of the victim and threatened to share them if she told anyone about the attack.

Musangu also engaged in sexual contact with a minor over social media, the jury heard.

Over a three-year period, Musangu sent and received explicit sexual videos with a teenage girl.

The pair attempted to have sex while she was underage. Their contact started when she was just 13-years-old.

Musangu’s only adult victim, a 19-year-old, told the court that he came round to her student accommodation after they fell out and attacked her.

He was unanimously found guilty of 11 of the 13 charges. He was also convicted of rape of a child under 13 by a 10-2 majority.

The jury panel of four men and eight women also cleared him of one count of rape after deliberating for just over 15 hours.

BBC announce the FA Cup Third Qualifying Round match they will televise
PHOTOS: Away Fans in the Stands – 25th September