Enda Stevens recalls the violent attack from a pitch invader on Billy Sharp and questions the role of police at Nottingham Forest that night.

The Ireland international said he and his Sheffield United team-mates feared for their lives during the post-match celebrations at the City Ground two weeks ago which saw Sharp headbutted at full force by a Reds supporter.

The Dubliner has admitted his concern at what took too place with it being one of many incidents on and off the fields with between fans, police, stewards and footballers post-pandemic.

“I was out there with him and it was just an absolute disgrace. The thing is with that, you’re actually fearing for your life. You’re on a pitch and thinking, ‘I can be attacked at any moment here’. There was no help for us, nobody there to protect us.”

“There were policemen beside us who didn’t help us and didn’t want to get involved,” said Stevens, speaking ahead of Ireland’s upcoming matches.

“It comes down to protecting us. We are the ones isolated out there, and we had no protection at all. There were people in place to protect us but they chose not to.

“They could see it and they didn’t help us. It was up to ourselves to protect each other and try get ourselves off the pitch, whereas they could probably do better in terms of policing it more with more stewards. It is a difficult one for the them, I understand that, but it is something that has to change.

“The fact of what happened to Billy, it was clear as day, and Billy wasn’t too far away from the tunnel. That’s where you should be policed the most, like in that tunnel. With the stewards, they should be all around there protecting people from getting in.

“We were right beside the tunnel and we had zero protection,” added Stevens.

🗣 “its an absolute disgrace, you’re actually fearing for your life! The situation is shocking and it shouldn’t be happening.” @Estevens1990 condems the attack on Billy Sharp and calls for more protection from authorities.

The Nottingham Forest thug has been named, shamed, and jailed for his headbutt on Sheffield United’s Billy Sharp, who was left ‘angry, shook up and bleeding’.

Robert Biggs, 30, of Ilkeston, Derbyshire, is to spend 24 weeks behind bars after pleading guilty at Nottingham Magistrates’ Court to occasioning actual bodily harm.

Biggs, also a season ticket holder at the City Ground, was sentenced for five-and-a-half months after he admitted to the charge and also admitted going on to the playing area at the match.

During the court appearance, he was informed that a separate charge of illegally entering the playing surface had been removed. He did not oppose an application for a banning order from future football matches.

Marianne Connally, District Crown Prosecutor for CPS East Midlands, said: “This was an extremely serious and unprovoked assault with a professional footballer standing at the side of the pitch left requiring stitches.

“Biggs has soured what should have been an incredible moment for the club and its fans. As a result of his actions, he won’t be able to enjoy seeing his club compete in the Premier League should Forest win the Championship play-off final.

“The CPS has been working alongside the police to ensure that this unacceptable act of violence has been dealt with quickly and decisively. Sporting events are occasions for the whole community to enjoy. Football banning orders are an important way to ensure those who cross the line at matches do not have the opportunity to put others at risk.”

Sharp, 36, a former Forest player, was standing in the dugout as the pitch invasion unfolded minding his own business, seeing what just played out. In footage that went viral online, Biggs charged towards him at full speed with his head, knocking the forward to the ground and leaving players nearby shocked and wondering is Sharp was alright.

The footballer wrote on Twitter that “one mindless idiot ruined what was an unbelievable night of football.”

He said: “As an ex-Forest player I will not let one scumbag ruin my respect for the Forest fans.”

Sheffield United manager Paul Heckingbottom described how Sharp was blindsided after the match. “Bill was minding his own business, off the pitch. Trying to get our players away and he was assaulted, blind-sided. It was cowardly,” he said.

“He was knocked to the ground, needs stitches. Really shook up. How can our safety be put at risk at our place of work?” “It (the assault) is a prison sentence waiting to happen. We have the footage and something will be done about it.”

Forest had already pledged to ban the attacker for life from the City Ground. 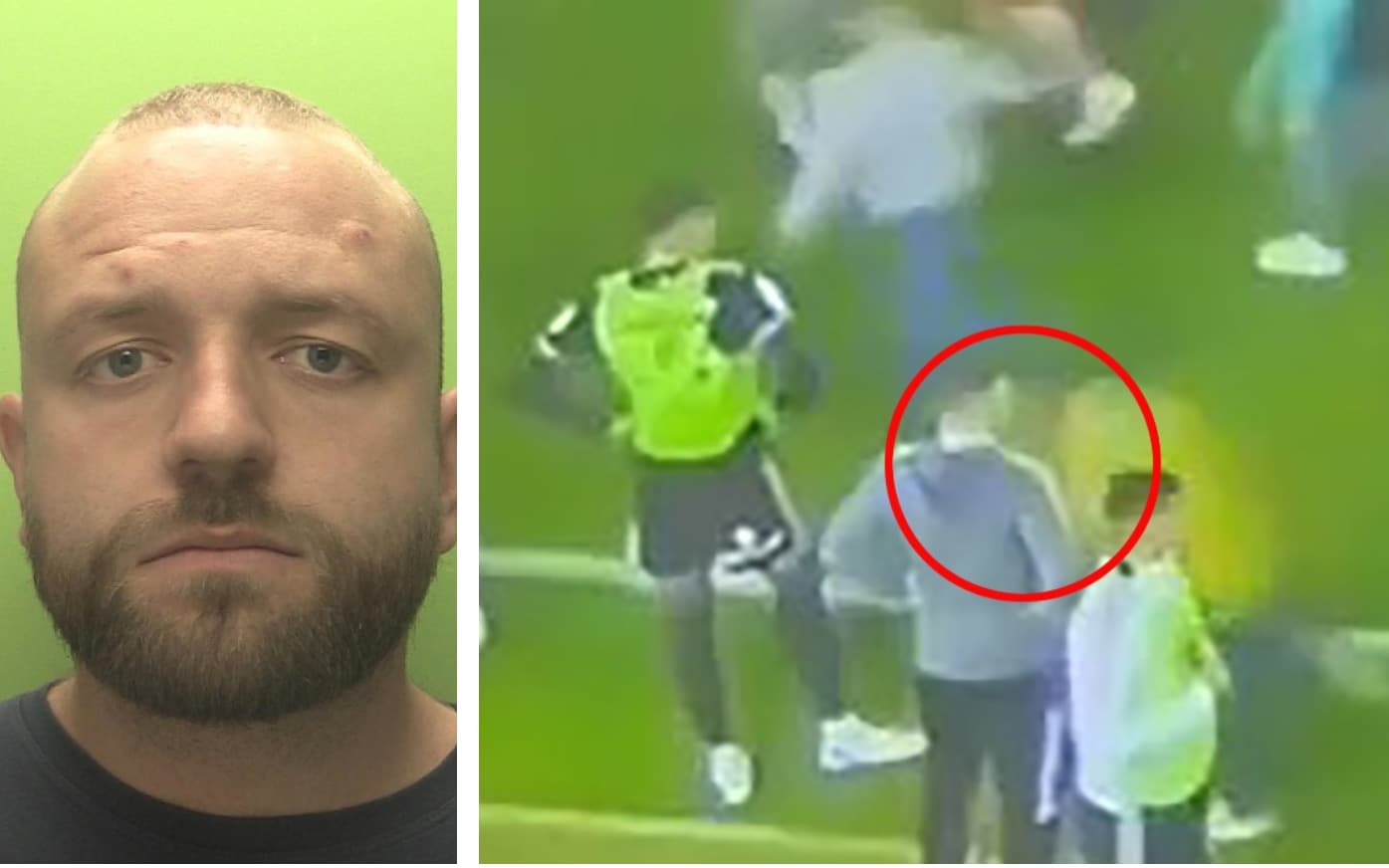