Chesterfield manager James Rowe makes the call for a National League shakeup in terms of promotion, something that’s been long debated.

The 38 year old Spireites boss has become the latest boss to call for more promotion places in the top tier of non league football.

Ahead of their FA Cup game at Chelsea, with Chesterfield sitting second in their league standings as we reach the halfway stage, has used the extra publicity surrounding his club this week to send a big plea to shake up the English footballing pyramid. 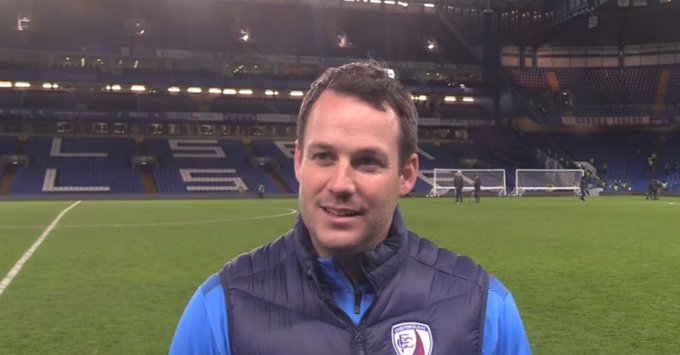 “I think the Vanarama National League now is purely professional other than a few teams that are hybrid anyway, so it’s really a professional league.”

Taking into account the rise in cash-rich clubs, there is currently just one automatic promotion place into the EFL, with a second opportunity to become part of the 92 coming via the playoffs. In League Two, four clubs can go up to League One.

“I think one automatic spot is my biggest grievance with our level – not the amount of games, not the intensity of it where you’re playing Saturday-Tuesday, Saturday-Tuesday,” Rowe went on.

“It’s not enough in the pyramid, for me, we’ve got good quality down in this division now. Players are dropping down from League One, the top goalscorer in League Two, [Paul] Mullin, obviously dropped down in the summer.

“It’s a really good league with really healthy attendances and I think that needs to be rewarded with more spots going into the EFL.”

He echoes Bolton Wanderers boss Ian Evatt who also made the suggestion, having led former employers Barrow to automatic promotion in 2020.

“It is crazy the clubs in that division now – it’s daft that there is only one automatic promotion place and another through the play-offs,” Evatt said in November.

“For me, we have to sort that out. There has to be a fairer split.

“It should be at least three to allow these clubs a chance to get back up again because the gulf in finances between the National League and League Two in terms of revenue is ginormous. It is too big.”

“In League One, there are four up and four down, I don’t really understand why there is an imbalance and why there aren’t three promotions and relegations from each division.

“For me, I think, in the league that we’re in, at least six or seven clubs would very easily compete in League Two. Probably more behind that too.”

Chris Wilder fired a warning to National League sides with the season made tougher due to the amount of spending going on.

He reflected on his time with Oxford United a number of years back and understands just how hard it is.

“Yes, we [Oxford] fell short in the league. Stevenage, credit to them, got a jump on us and saw it out. But when I look back now, that league was so strong. We played Luton, York, Cambridge, Wrexham. Rushden & Diamonds, who were very powerful at the time. There were eight or nine clubs who would comfortably have dealt with the Football League, and only one automatic place.

Many fans have debated that here should be three up and three down. What do you make of the idea for more promotion places in the National League? Let us know via our socials.

Chesterfield are in second with 43 points from 20 games played while Bromley are in third with 41 points after 22 games played.

Dagenham & Redbridge, Wrexham, Boreham Wood and Notts County all sit in the playoff places – with Stockport, Solihull and Grimsby just outside it.