A Cardiff City pitch invader has been left rather hurt after face-planting the concrete ground when trying to escape a steward.

Brighton maintained their excellent start to the 2021/22 campaign to progress through in the Carabao Cup and inflict the Bluebirds’s first loss of the new term.

Andi Zeqiri then opened his account for the Seagulls in the second half as a much changed Brighton overcame the Championship side after making 11 changes to the side that won against Watford.

Cardiff, who made eight changes with Sam Bowen and Tavio D’Almeida handed competitive debuts and Mick McCarthy’s side made a positive start to the game.

However, after many chances, including a James Collins header hitting the crossbar, Cardiff just couldn’t put the ball in the back of the net.

It was the visitors who took the lead against the run of play after nine minutes as Enock Mwepu’s sublimely threaded through ball from Brighton’s half found the going forward Moder, and the Poland international coolly slotted past Alex Smithies.

Collins had a half chance to get Cardiff back in the game two minutes after the break, but his header was saved by Jason Steele and then as Cardiff pushed for a way back into the game, debutant Moises Caicedo fed Zeqiri, who slotted into the bottom left hand corner of the net, making it 2-0.

There were some bizarre scenes however during the game when three fans legged it onto the pitch, and one of those has gone viral as seen below. Nothing like a bit of karma.

All three individuals have been reported to South Wales Police and the Club is preparing an impact statement that will support those individuals being charged under the Football Offences Act (1991).

It is of paramount importance that the playing arena remains a safe area for players and officials; it is a criminal offence to enter the field of play or the area adjacent to it.

The actions of the three individuals who committed offences on Tuesday evening will likely result in convictions, fines and three-year Football Banning Orders administered by the courts.

As part of this process, the Club will also be applying for costs to cover expected EFL sanctions and increased ongoing security charges.

Cardiff City FC would like to thank the vast majority of its supporters who abide by the Club’s ground regulations and support the Bluebirds with the best will and intention. 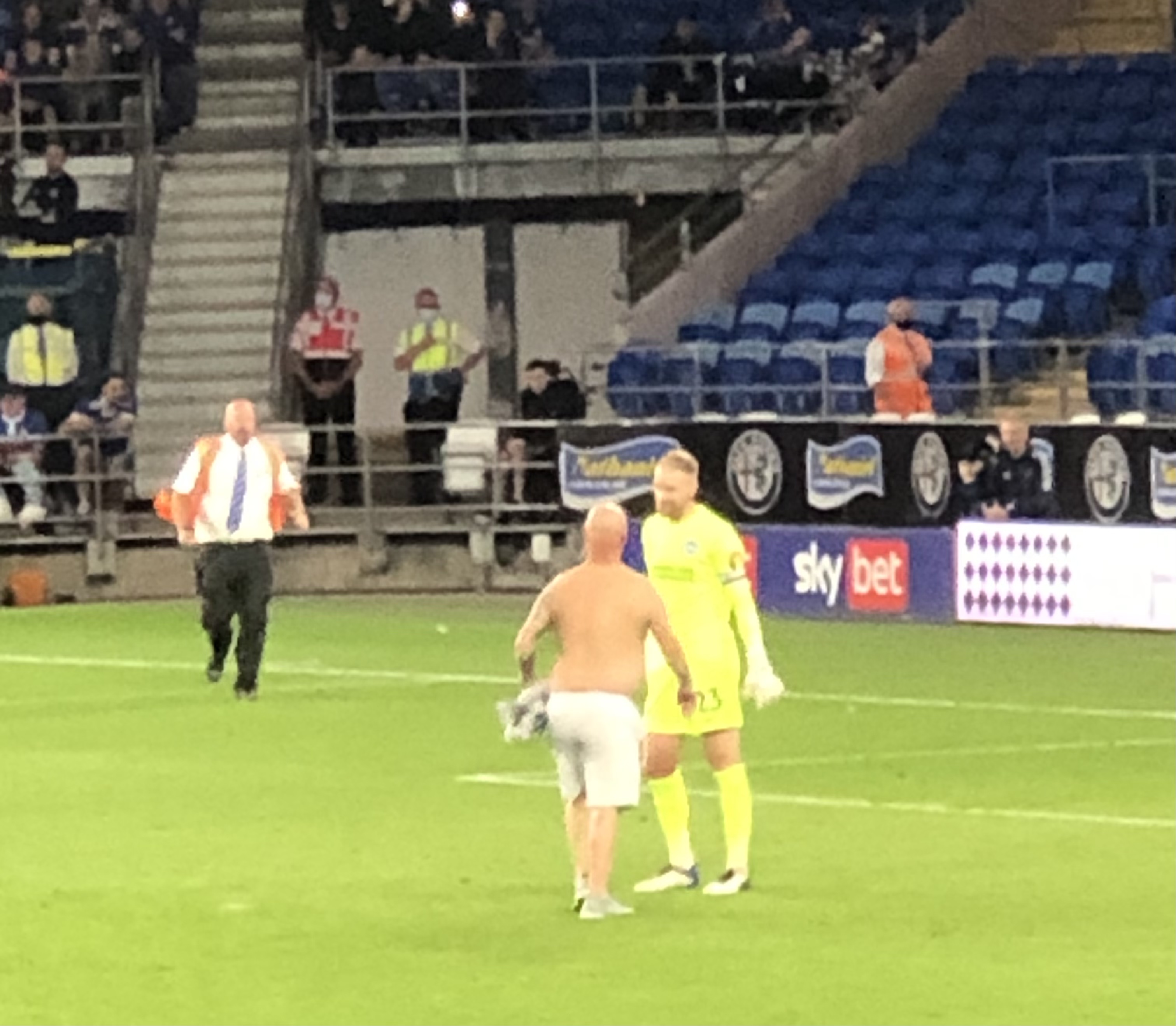 WHAT THE MANAGERS SAID POST-MATCH

“Beaten by a better team. We started well in the first half, had a really good chance from pressing and pressed really well. We were in good possession, gave the ball away and it ends up in the back of the net.

“They’re a good side and they were considerably better than us in the first half after that. In the second half I thought the lads rallied and were great and again we’ve given the ball away and it ends up in the back of our net.

“You can’t knock the spirit, we kept going and kept going but beaten by the better team.”

“You don’t really know for sure how it’s going to go against a Championship team. It’s a different type of test, but the important thing with all of them is that the character is really strong.

“They are open-minded and want to try and do their best. Our job is to develop the right pathways into the Premier League because the level is so high. The work that the academy do developing that is fantastic.”

“We’re really pleased where we are at the moment. We should be really proud as a club that we’ve got an academy like we have and we want to try and help that. The guys earned that win, deservedly I thought and could have added to the scoreline.”

@TypicalTwtAcc: im more surprised he got up after that fall tbh

@FrattonEnder201: Got what he deserved. Twat.

@wearebrighton: Seeing this justified Cardiff (A) and the horrific hangover I’m currently suffering from

@lewieboy: Wait 19 months to get back to football to do this and then be banned 🤦🏻‍♂️

@MarkGunnwalks: Saw this dull twat earlier so this at Cardiff city stadium. Nobhead

@ieuan_teague: Fair play I still haven’t stopped laughing, seen 2 people run on to the pitch was worth the admission alone 🤣

@CCFCZac: The ccs is a fun place

@callumjones2912: Fuck me bet that hurt🤣

@James_BHAFC: Proud to say I was at this game 😭😭

@LouisCcfc: all fun and games down the city

@kerrybha95: Even from the away end. This was fucking brilliant