Cardiff City and Luton Town fans were involved in a punch-up with bottles thrown at coach leaving some injured and bloodied.

Footage has emerged showing the two set of supporters clashing just outside a train station prior to the Championship fixture kicking off.

As Luton supporters arrived by coach into the city of Cardiff, they found themselves under siege from Cardiff hooligans say reports.

Cardiff City (about 7 people) threw bottles on a bus with Luton fans, then the bus stopped and a fight broke out. The action took place before the match. pic.twitter.com/VZEObZNqg3

The coach was pelted with up to 20 large beer bottles, smashing against the coach windows, forcing the Luton fans to get back at them.

Jumping from their seats, the Luton supporters ran off the coach shouting at the driver to hit the brakes and let the angry fans off.

Eyewitnesses at the scene told Global247news: “It was mayhem; Luton didn’t take lightly to their coach being pelted with bottles; they stormed off the coach and waded into the Cardiff fans.

“It was like something out of the eighties football scene – It was a right old scrap.” 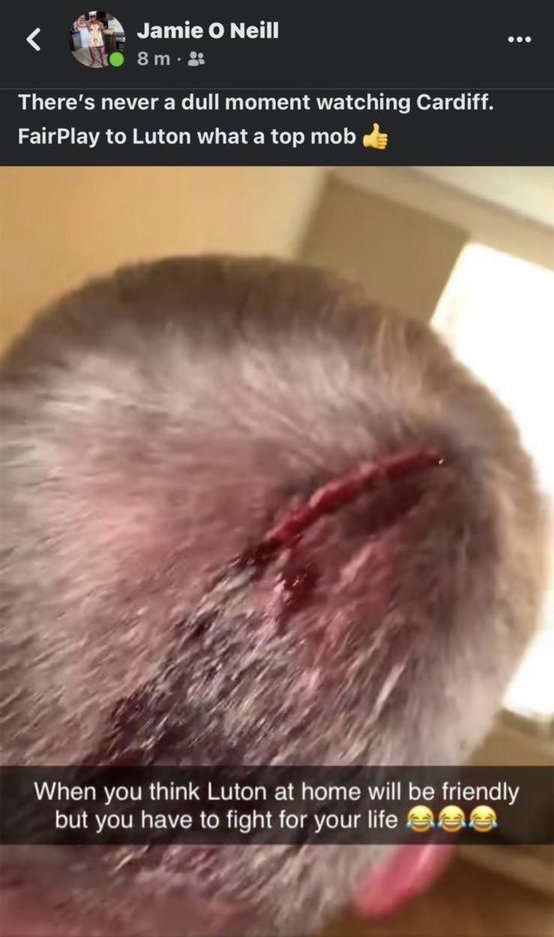 Another said: “It went right off – firstly a few bottles then a full-blown battle – a few lads were sprawled down on the deck, one was out cold; it was a proper tear up.”

South Wales Police are currently studying footage from the incident to identify those involved.

One fan was seemingly so badly hurt that his head was badly wounded.

The game itself saw Luton move closer to impressively securing a Championship playoff place as Harry Cornick’s high-class header gave them a huge win at Cardiff.

Nathan Jones’ side remain fourth in the table but extend the gap to seventh place to six points.

Cardiff remain 17th after a third defeat in four matches.

Bluebirds boss Steve Morison will be left annoyed at the missed chances from Jordan Hugill and Isaak Davies.

Though it was Luton who looked the more likely winners throughout the course of the game, with Cornick’s moment of class.

The only down side for Luton was potentially costly injuries to keeper James Shea, James Bree and Fred Onyedinma.

Cardiff’s Steve Morison: “We are driving them every day. We have to drive a hell of a lot more than we should have to but that’s not going to change until we change the group and we get a more balanced group. Unfortunately, the world we are in nowadays, the young players don’t say a word. They just play football. We need more players around them that can drive them and keep pushing it so it doesn’t have to come from the staff every day.

“It was very quiet out there – I think you could hear us more than you could hear anyone else. We are just not stopping giving them information. When it’s noisy, like I have just said to them in there, you need to pick yourself up. We are going to Bramall Lane at the weekend. That’s not going to be so quiet and we won’t be able to talk you through the game so work it out yourselves. We need to keep driving them and hopefully once we change the group, we will have to do it that less.”

Luton’s Nathan Jones: “It was a stunning header from Harry and I’m so pleased for him. We pulled him out of the starting line-up for the game because he had been working so hard for so little reward. Every time he does come on, he seems to score. Ironically, he scored the winner coming off the bench the last time we were in Wales at Swansea and he did exactly the same.

“The games are getting tougher, not just because they are Championship games but because we are losing players. We have got 10 players injured, eight central midfield players out and we are patching everything up. People are having to go through big, big shifts. We dug deep, kept a clean sheet and defended our box and then converted one of our chances.”

@lutontownfc11: Bus was bottled, hence why they got off. What you expect them to sit on there like good little boys? Flid

@adam_cumberland: Who are the “mongs”? You must mean the Cardiff fans throwing bottles at a bus and not expecting a reaction. Doesn’t sound clever does it?

@mikewiIliams_: So they threw bottles at a bus expecting nothing and absolutely shat it when it all kicked off. Sounds exactly like Cardiff City 🤣🤣🤣🤣🤣🤣

_the_welsh_wanderer_: One Luton fella in a white top crawling on the floor. Those Luton fans didn’t want to move from the side of the coach until they realised they were up against a few young teens.

morgan.hopkinss: Coppers jobs done for the