Burnley’s Phil Bardsley had to been pulled away from the referee after having a heated tunnel exchange at Sunday’s game against Tottenham.

The Clarets substitute was fuming at Kevin Friend after his decision to award Spurs a penalty for an Ashley Barnes handball.

Friend handed Tottenham a penalty after consulting the VAR monitor and ruled that Barnes had handled in the box.

Davinson Sanchez’s effort hit Barnes on the arm from close range, with Burnley left enraged by the decision that could cost their place in the Premier league.

Caretaker boss Mike Jackson made his feelings known from the touchline as everyone connected to Burnley all protested against the decision.

Harry Kane went on to slot home from 12-yards on the verge of half time, but Burnley’s protests continued down the tunnel as can be seen in the clip below with Bardsley, a 36-year-old former Man Utd, Aston Villa, Sheffield United and Stoke player, really unhappy. 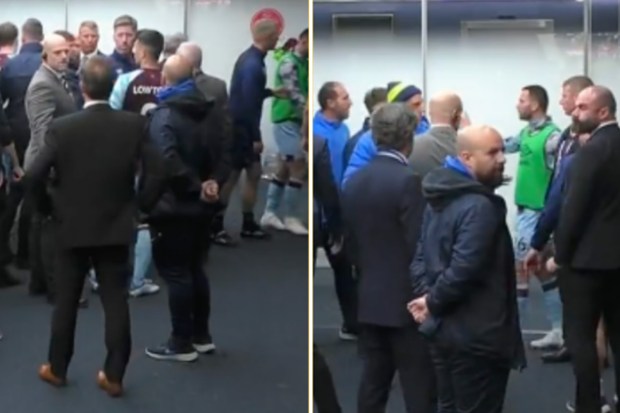 Bardsley was spotted walking over towards Friend and waving his finger in anger at the decision.

Tempers flared in the bowels of the Tottenham Hotspur Stadium as Clarets players and staff continued to remonstrate with Friend.

Bardsley appearing to march over in the direction of Friend, but a member of the Clarets backroom team lead him away as he fumed with the decision.

The result put Antonio Conte’s side fourth ahead of Arsenal’s trip to Newcastle on Monday, while it put Burnley back in the Premier League drop zone.

Pascal Struijk’s late leveller for Leeds against Brighton at Elland Road saw Jesse Marsch’s side leapfrog out of the relegation places at the Clarets’ expense.

Burnley’s destiny remains in their own hands, with Jackson’s side a point behind Leeds with a game in hand, but Friend’s decision to award Spurs a penalty could prove costly.

“I’ve just watched it back – I don’t think it’s a penalty,” Jackson said in his post-match press conference.

“You have to look at what happens before the ball comes in. It’s an 18-yard box with bodies in it, people are competing.

“Someone pulls Ash’s arm, he tries to keep his balance. How he can get out of the way of that, I don’t know. You don’t stand in an 18-yard box with your arms by your side. They’re up and they’re using your strength. Nobody has even appealed for a penalty.

“How can you go back into the 18-yard box and there’s three shirt pulls, someone pulls someone’s arm – you’d never get the game going.

“I’m annoyed but I’m proud of the group. They gave a right go. There’s a sign of fighting spirit. I don’t want to take my annoyance out on something when they played so well.”

Spurs boss Antonio Conte disagreed with Jackson regarding his take on the penalty, as his side climbed into fourth to put pressure on Arsenal ahead of their Monday Night Football clash at Newcastle, live on Sky Sports.

“I think [it’s] 200 per cent [a penalty] – not even 100 per cent,” Conte added, while pointing to his arm explaining where it hit Barnes. “It was so clear and honestly, it is difficult to understand their [Burnley’s] complaints.”

What is the handball rule?

A player has committed a handball offence if he or she:

– deliberately touches the ball with their hand/arm, for example moving the hand/arm towards the ball;

@Coco_Darky: Wouldn’t fuck with Phil Bardsley… Get on giving it spurs in the tunnel!

@rharrisoneal72: Definite penalty. No one would moan if a free-kick was given if it happened outside the box. All this ‘wasn’t deliberate’ cobblers…if handball had to be deliberate then there’d never be a handball.

@gusty1882: Go on Phil Bardsley knock fuck out of a couple of them cunts up the tunnel.😂

@xAlexTHFC: The rules would disagree with you

@AndyBowers11: Starting to sound more like Dyche every day 😥

@FlertBFA: If thats a penalty then FA wants Tottenham in the top 4. The ball wasn’t going into to the goal and Sanchez had his back turned from the goal.

@J_Schofield4: It’s weird how handball follows the strict laws of the game but wrestling people at corners, obstructing to shield a ball out of play and constant simulation is never addressed

@jamesjohn_thfc: How isn’t it a penalty is probably the better question. It’s a shit law granted but that’s not Spurs fault, we’ve had more than our fair share against us. Ref had no alternative but to give it.

@TeddyFella: Correct – yes, cos that’s the law. Right – no, cos that law is fucking ridiculous! We have been on the wrong end of some appalling handball decisions in the last couple of seasons though, so we don’t care if we got a soft one today!

@JoshDutto: It’s hilarious how much the officials want Spurs to get 4th

He’s jumped forward to try and block it with his arm in the air how do people think it’s not a penalty pic.twitter.com/vqKNPuTDxO

🗣 “They [VAR] look for three or four minutes to find anything they possibly can to give a penalty in such a vital game.”

@GoonerTaIk: Spurs gifted yet another soft penalty. The allocated time for the first half was already done and the ref pulls it back to give a handball. How is Barnes possibly supposed to move out of the way? It’s launched at him from point blank range.

@London_Highbury: No reasons for his arm to be that high. Stupid play by Barnes, clear penalty!

@alexmdr_: Absolutely gutted, hand in an unnatural position, yes, but how on earth is Barnes supposed to react when the ball is launched up in the air from a yard away. Shocking decision which cost us a point. Would we have got that penalty, roles reserved? No.

@Steeley_BFC: People who thinks that’s a penalty have never played footy before!! What is Barnes meant to do when jumping?! Cut his fucking arm off

@carlp76: Harsh penalty. Anyone who has seen Ashley Barnes play knows as soon as a ball is near him he raises his arms, usually to smash someone in the face with his elbow.

@GillsInTheBlood: Never a penalty in the pre VAR days, not even questioned by the home players/fans in real time.
Yes Ashley Barnes’ arm is in a lm unnatural position but what about reaction time & distance. Harsh. #TOTBUR

@SeanBarnes9643: VAR is for “clear and obvious errors” right? What was clear and obvious about that penalty? 😡 I can stomach going down because we haven’t been good enough but if that decision is what sends us down I’ll be absolutely disgusted. #twitterclarets #UTC #NNN #TOTBUR

@CasaDupre: Ashley Barnes had his arm out like Rose on the titanic and you’re saying no pen