Brentford stewards criticised after what they did during Oldham protests

Brentford stewards have been criticised after what they did during the Oldham Athletic fans’ protests during the 7-0 defeat.

599 of the Latics faithful made the trip down to West London to show support to their club’s players, only to witness a thrashing by their Carabao Cup opposition.

Marcus Forss was on target four times for the Bees, while Yoane Wissa also scored a brace including an acrobatic overhead kick to really leave Oldham fans disappointed with the state the Greater Manchester outfit find themselves in right now.

These two teams were regular opponents in the third tier of English football around the turn of the century, but this fixture was a stark illustration of how their fortunes have differed since then. One is in the Premier League for the first time, whilst the other, a founding member of the Premier League, find themselves of League Two and of the 92.

You could say Oldham knew what they were up against, despite Brentford making 11 changes, while the Latics could only name four substitutes.

Oldham’s travelling fans were ironically cheering when they even had a shot on target, and almost had an actual goal to celebrate when substitute Benny Couto spotted goalkeeper Alvaro Fernandez off his line only for his shot to float over the crossbar.

During the game, the away end chanted for their owner to get out of their club, whilst also holding banners and paper with words printed on to get the message clear to those around them and watching potentially via a live stream.

However, some stewards working inside Brentford’s new stadium for the game approached Oldham fans and allegedly tried to take their banners away.

As can be seen in the video clip below, this didn’t exactly go down well, with supporters left baffled at what the fuss was all about, wondering what was it that theyw ere doing wrong.

Stewards trying to take the “Abdallah Out” banner #oafc pic.twitter.com/4HO5OldFlZ

No statements have been made on what happened, with stewards seen in the clip seemingly giving up in their attempts to confiscate, before walking back down down the stand from the away fans.

One fan, @steshipman, took to social media the morning after his side’s 7-0 defeat, saying: “My anger this morning massively outweighs my sadness at what is happening. I attended last night and I have a few words to say. I have supported and travelled with this club for 30 years. I have made lifelong friends and I have witness both the best and worst of days up and down the country.

“They say that the culture of any business filters down from the very top, from its ‘leader’. And true to form, last night I witnessed a performance that had Abdallah Lemsagam written all over it. Here’s why…We were assured they would turn up. They didn’t. There was no accountability, no responsibility, no heart, no intelligence, no desire to turn the situation around. No idea HOW to turn the situation. When confronted, they disappeared and hid in the shadows, while pointing the finger and accusing all others of blame.

“Well, congratulations Abdallah, it is fair to say all your traits have successfully been adopted by the club and the team that represent YOU on the pitch.

“I applaud the 599 that turned up in hope rather than expectation and sang their hearts out for THEIR club, a club being torn apart before their very eyes with every passing day. Let’s stop pretending and playing these games, let’s stop with this inane finger pointing at other people, the lies, the deceit, the accusations and let’s admit that the situation is completely unrecoverable. YOU have failed, you have successfully killed 126 years of history in all but 4 years of your tenure.

“Fans have made their feelings clear and it’s really time for you to sell up and walk away before you cause irretrievable damage to a once proud club, it’s league status and most of all, it’s amazing, loyal, inspiring fanbase that you have seen fit to treat with the upmost contempt since day 1. SELL THE CLUB.”

WHAT THE MANAGERS SAID POST-MATCH

Brentford manager Thomas Frank: “I’m really pleased with the performance and the attitude was bang on from the first second, and not only because we scored after three minutes.

“We kept going throughout the game, throughout the 90 minutes, which says a lot about the mentality of these players, and then we scored some fantastic goals.

“Marcus [Forss] is doing all he can every day in training, and he’s a really good player. He scored four really good goals. I guess that needs to be a 10 out of 10.”

Oldham boss Keith Curle: “At half past five I still couldn’t name my team because the club could not get an answer out of the EFL regarding money being transferred,” said Curle.

“The football club have jumped through hoops and done everything required. At half five they (the EFL) said, ‘If you play this 17-year-old he becomes an established player within your 22’.

“I think they are trying to make us fail here.

“We couldn’t do a team meeting because we had to wait until quarter past-half past five as we had to wait for confirmation from the EFL whether I could start one player and two of the younger players. It’s had to go to their legal team, so preparation hasn’t been ideal. My team talk was on the pitch.”

Curle added: “On a daily basis there are different challenges, but my attitude and what I keep on telling people, it is what it is, deal with it, and that’s what I get paid to do.

“We’ve got 15 players unavailable that couldn’t start the game, either through injury, through restrictions from the EFL or one player being cup tied.

“You take that many players out of any squad out of any division, you’re not going to get consistent results, and that’s where we’re at at the minute.

“We’re bottom of the league, a lot of things are conspiring against us as in challenges but we’ll come through it. There’s a belief and a unity.” 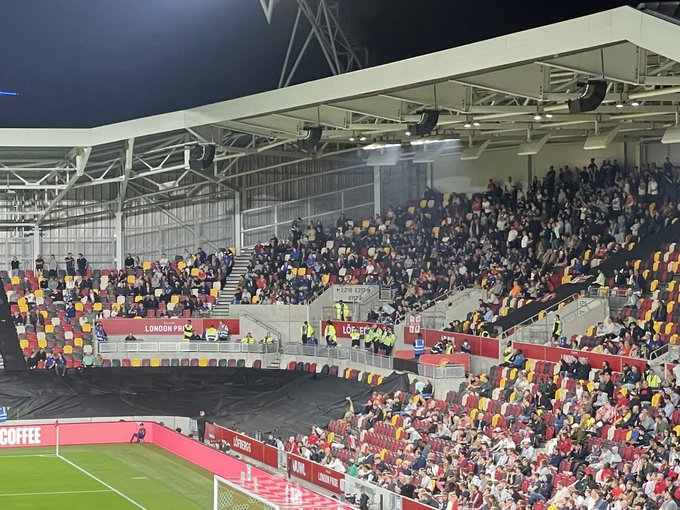 Brentford stewards criticised after what they did during Oldham protests

@bringbackngoo: #BrentfordFC stewarding policies need reviewing. Non-offensive banners were confiscated and fans wearing anti-Lemsagam t-shirts were made to turn them inside out.

@jimmymack84: Very strange behaviour. Can only imagine there was some fear of the game being interrupted, they had sealed off the front seats etc… We know about bad owners more than once from the past. Peaceful protest should be supported. Sorry it happened. Good luck

@Pandamonium1881: Oldham fans – stay calm guys. It’s massively emotive and we all feel your pain. We know you want to protest & some clubs (maybe even with some pushing from you know who behind the scenes) stewards may want to “fight you”. Don’t get drawn in. You will get your club back xx

@LunarEagle1996: Sad and pathetic. @BrentfordFC should know better, don’t enable the toxic owners of our club you imbeciles. #oafc #AbdullahOUT

@McgrotherRobin: That’s a disgrace – Brentford should be ashamed. Of ALL the clubs, they should be better than most. #oafc

@T145Alex: I wonder who’s requested it be removed 🤔

@AndyWestXRP: The guy telling the steward it’s not about racism get his hard drive checked

@bradhaslam2: It’s not about racism tho is it I’m sure it’s the fact his club is being ruined by the owner

@Scottreeves2012: Big al going for it there

@bozzyman111: Can’t believe what I just saw stewards trying to get the Abdullah out banners #oafc

@coryknowles0: Just got assaulted by Brentford stewards while trying to leave the stadium. Didn’t go against what they said once. Power hungry bastards and I bet they’ll get away with it. @OfficialOAFC @BrentfordFC #oafc #bfc

@JoshBrooks67: If anyone has the video of the stewards assaulting fans at the end of game put it on Twitter please, get these twats sacked. #oafc #BrentfordFC

@Matthew1Cooke: Getting feisty in the away end. #brentfordfc stewards being arseholes #oafc

Slogan of ‘Bee Together’ until it comes down to supporting a protest against our owner. Getting your stewards to fight fans to get signs off them. Telling them to turn T-shirt’s inside out. Great help lads #oafc https://t.co/TOpWjUbyxH

With Brentford stewards criticised after what they did during the Oldham protests, did you witness anything similar to what has already been said? Let us know via our socials!