The Footy Scran Twitter account uploads people’s photos of some of the least tempting-looking food to some that will really make your mouth water.

They cover all from football grounds from across the world but mainly English football, complete with prices to really get people talking if the look of the food isn’t enough. 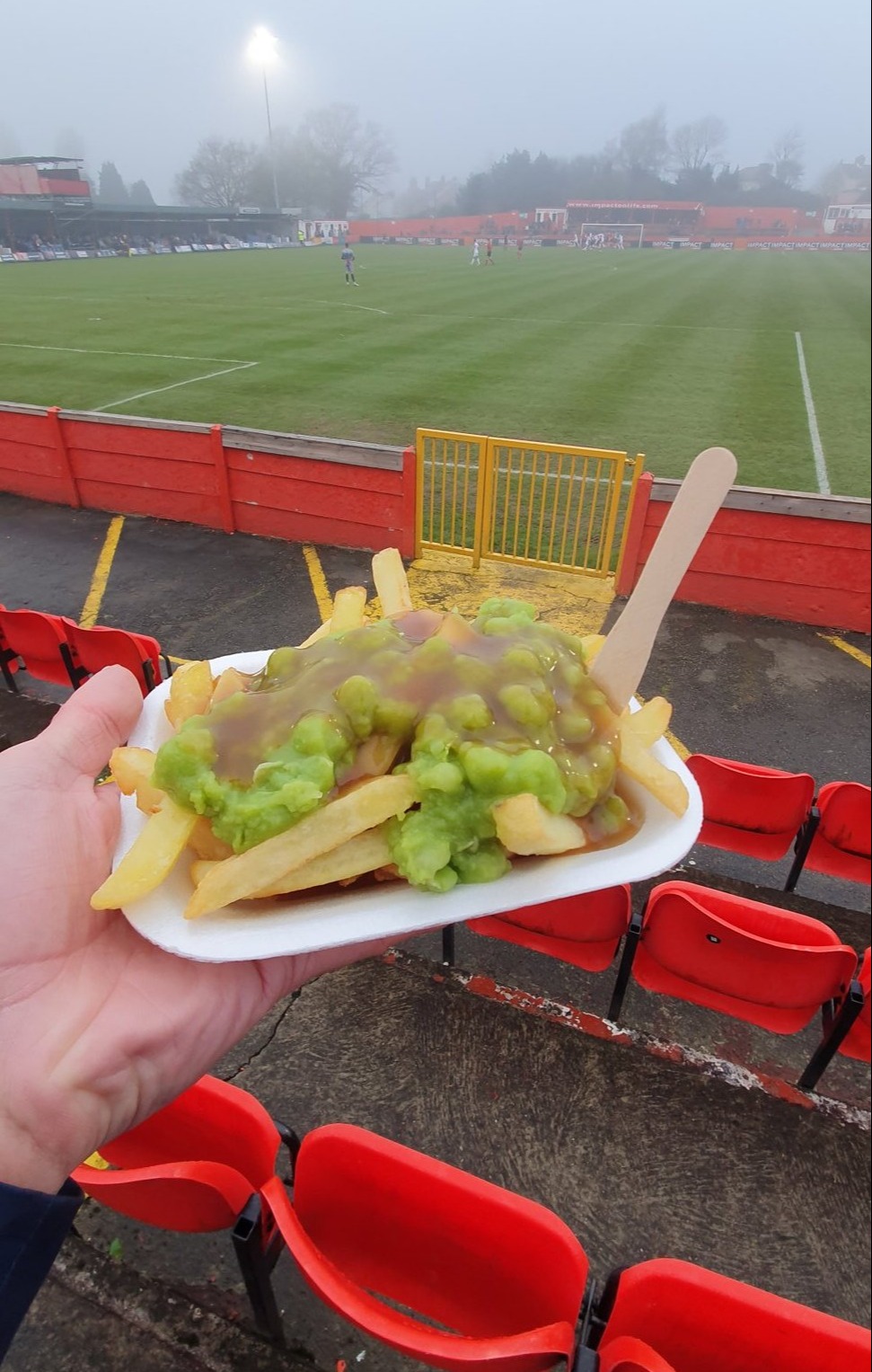 For one away fan, spent their Saturday heading to Alfreton Town of the National League North for their FA Trophy clash against FC Halifax Town.

The supporter took advantage of the club’s £3 special, chips, mushy peas and gravy, served with a wooden spork, and who knew it would cause.

Alfreton ended up losing their tie on penalties, much to the delight of the away fan whose day was made happier with the food on offer.

Though, after posting a photo of it and getting Footy Scran to retweet, a huge backlash was produced with the likes and replies in it’s thousands, nearly 10,000 quote retweets in fact.

A war of words played out with Brits backing their local delicacy and even took  a dig at American critics for their choice of foods.

Some of which mentioned including hotdogs topped with mac and cheese and fruit loops cereal, as well as chocolate chip pancake-wrapped sausages on sticks.

The official Alfreton Town got in the act to defend their honour, retweeting the original photo, they wrote: “We seem to have upset a few of our neighbours across the pond with this one…

“This is proper footy scran and £3 is a bargain, we won’t hear otherwise.”

This is proper footy scran and £3 is a bargain, we won’t hear otherwise 🤫 https://t.co/PYycCcTH2q

As Alfreton cause uproar with Americans disgusted over club’s ‘proper footy scran’, here is what everyone said below…

@AndyAndy2022: They just don’t understand British football stadium cuisine admin,if it goes on or over chips or fits into a bread roll, bread cake or cob then it’s footy Scran lol.

@PeckCheck: The layers of consciousness I had to go through to realize it said chips peas and gravy when I thought you said chickpeas, and I was like damn these chickpeas look like fries and why is gravy green?

@HiroFR_: why you eating like you still at war with us?

@HinnHeartsBeer: They elected a national leader who prefers his prime steaks well done, with ketchup.

@SwissChard86: What the fuck is wrong with these god damn English?? A constant affront to god

@tommy_corner: We fought and won a brutal war just so we wouldn’t have to eat shit like this.

@Jordan_Neale: I got some absolute abuse for this beauty. The yanks and co just don’t understand the feeling on a bitter cold day watch your local tucking into something like that

@Arsenal_Morris: Chuck a pie on the side and it’s elite football food

@AussieAntics: Nah wtf is this….? We literally eat one of our countries national animals and I’m still judging this abomination.

@SoTerriblyTired: Couldn’t you have at least taken off the peas? Then you could say that it’s some cheap poutine

@ReeceDaviesSWFC: Mushy peas are what take it to the next level. It’s missing a bit of mint sauce which would make it elite.

@Connquering: A nation that had the splendor of the immigrated masses and defaulted to hormone ridden BBQ, potato salad, and birthday cake flavoured maize. Wouldn’t take their opinion on a crossword

@bannersfold: Your man is enjoying Gerber baby food on top of crinkle fries marinated in bottled gravy. You’re telling me that is better than BBQ and potato salad?? 🤣🤣

@stwwii1: I wouldn’t listen to any culinary feedback from a country that puts whole chicken in a can. £3 for proper chippy food at the match is perfect.

@GY1Matt: Deep fry it & cover it with plastic ‘cheese’ squirted from a can & they would be all over it!

@TheDB30: Get a pie involved and you’ve got yourself a buyer on 12th Feb! Let’s be honest, Americans having a dig at another country’s food traditions is like Boris Johnson having a go at someone for telling lies.

@vipermakesfilms: When are they gonna learn that the more like shit a food looks the better it tastes. When you don’t care about presentation, just taste.. that’s where its at

@chrisgaudie: From a country that sells a hot dog topped with fruit loops. Top footy no

@petergoodwin92: As @stephenfry once said; “This from a country with spray-on Cheese”

@mdalbert88: What Americans aren’t interested in this? We’re all fat gluttons and will eat anything.

@AndyAndy2022: There’s nothing wrong with this. Mushy peas are delish with a bit of gravy and chips and also a cheeky pie. @AlfretonTownFC haven’t committed any food Scran crimes with this. What do America know about food they think Hersheys chocolate is nice. Also Butterfingers are a disgrace

Americans: That is disgusting.

never been glad to be American before until now. pic.twitter.com/oxrNOQi3vO