1 champion and 2 promoted all confirmed on what was a hotly anticipated final day of the League Two season, with plenty at stake.

Going to the 3pm kick off, we knew that every team in the top nine of League Two has something to play for going into the final day of the season, making it one of the most exciting final days in this division in years.

Cheltenham would be crowned champions of League Two if they win as they host Harrogate. They will also seal it if they draw and Cambridge fail to win at home to Grimsby.

They would also be champions if they lose, Cambridge fail to win and Bolton ended up not beating Crawley with 13-goal swing.

Cambridge would have the C placed next to their name in the standings if they win and Cheltenham fail to win.

Bolton would be champions if they win and Cheltenham lose with a 13-goal swing, and Cambridge fail to win. Still with us?

Ian Evatt’s Bolton would be promoted if Morecambe fail to better their result. 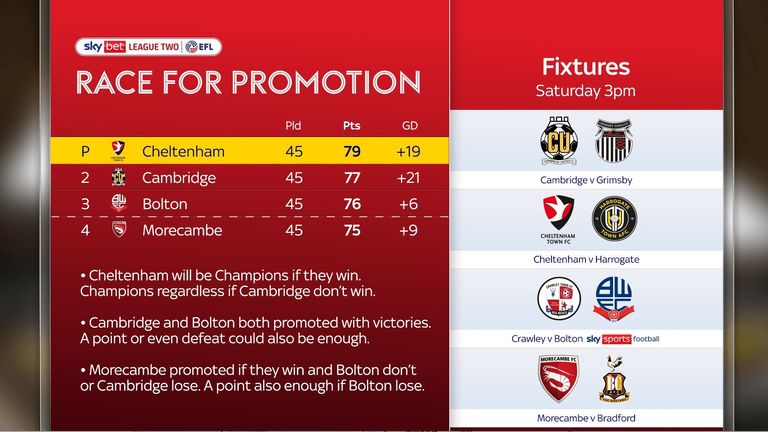 Newport would secure a playoff place if they avoid defeat at Southend.

Tranmere would be in those playoffs if they avoid defeat against Colchester.

Exeter would secure a playoff place if they win at home to Barrow and one of following happen – Newport lose, Tranmere lose, Forest Green fail to win.

A draw would be good if Forest Green lose and Salford fail to win.

Salford would secure a playoff place if they win at home to Leyton Orient and Forest Green and Exeter fail to win.

HOW DID IT PLAY OUT?

Cheltenham fell behind on the 7th minute, with Harrogate, fresh from their FA Trophy win on Monday, taking the lead against the Robins.

That meant that Cambridge had a chance to top League Two if they win.

Bolton made the perfect start at Crawley minutes later when Antoni Sarcevic was played in down the left flank and he cut inside, advances into the box and then smashed high into the Crawley net. The Trotters were returning to League One as things stood.

Newport started the afternoon needing just a point for their play-off place, but they found themselves behind to relegated Southend.

Centre-back Shaun Hobson was the scorer as County failed to clear a corner on a few occasions and he sweeped it home on his left from the edge of the penalty area.

On the 11th minute, Cheltenham got their title bid back on track as Liam Sercombe striked the equaliser against their visitors from Yorkshire.

Morecambe pushed in the early stages and only the post denied them an opener on the 20th minute.

The Shrimps work a shooting opportunity outside the box for Liam McAlinden, however his low shot striked the left-hand upright and rebounds to safety.

A huge goal for Exeter against Barrow on the 25th minute!

Matt Jay connects with Robbie Willmott’s cross from the left for a close-range tap-in.

Exeter are in the play-off places as it stood, with Forest Green dropping out.

On the 22nd minute, Cheltenham were back on course for the League Two title as Sam Smith slotted them in front against Harrogate, who had taken an early lead.

Cambridge took the lead on the 25th minute.

A free-kick was sent to the back post, where it was headed back across goal by Joe Ironside.

The header picked out Liam O’Neil, who hit a textbook volley into the Grimsby net.

The top three are all winning and heading up at that point. Morecambe would have to settle for the play-offs.

On the 26th minute, Bolton doubled their lead and gave themselves a bit of breathing space. Oladapo Afolayan was in acres of space and tapped in from a low cross. The Crawley defence was no where to be seen.

Having seen their promotions rival go in front, Morecambe then took the lead in their match against Bradford.

Liam McAlinden slotted Derek Adams’ side in front with a composed finish from inside the box.

The Shrimps still need Bolton to drop points or Cambridge to lose, but they were doing their bit.

On the 34th minute, Bolton had a third goal, from Eoin Doyle, ruled out for offside.

Salford City vs Leyton Orient was a delayed kickoff, and the first half got underway.

The Ammies knew they could get into the playoffs if they win and both Forest Green and Exeter fail to win.

As things stood, the Grecians were winning and on track for a top-seven finish.

On the 50th minute, Bolton were cruising at 10-man Crawley, with Oladapo Afolayan throwing in a couple of step-overs on the left before picking out Antoni Sarcevic in the box.

He laid it off to top scorer Eoin Doyle, who curled in a left-footed shot to net his 19th goal of the season.

After back-to-back relegations, the Trotters are on the up.

Bolton fans can start to party! 🎉🥳

Eoin Doyle bends it into the corner and that will be that! ⬆️🆙

A flood of goals then went in, while Salford missed a penalty against Leyton Orient, Cole Stockton put Morecambe 2-0 up on the 57th minute.

Morecambe make the points safe at least after a ball forward releases Carlos Mendes Gomes behind the Bradford defence and some good feet sees the forward create some space.

He then popped a reverse pass for Stockton, who finishes simply. Morecambe need a Cambridge or Bolton collapse to go up today.

Tom Beadling equalised for Barrow against Exeter, Mickey Demetriou got one back for Newport against Southend, and Wes Hoolahan made it 2-0 to Cambridge against Grimsby.

The experienced winger Wes Hoolahan swung in a free-kick from wide on the right and it evaded everyone to nestle in the Mariners net.

The U’s are going to return to the third tier for the first time since 2001-02 at this point.

Another good penalty save in quick succession keeps it 1-1 at Roots Hall.

Matty Rush was denied by a fine low save to his left by Tom King after Southend were awarded the spot kick for a handball against Newport.

Aaron Collins made it 1-0 to Forest Green on the 63rd minute before Odin Bailey doubled their lead over Oldham shortly after.

Paul Mullin got his on the scoresheet this afternoon to make it 3-0 to Cambridge on the 80th minute.

He curled a free-kick across goal and into the bottom right-hand corner, via a faint deflection off a Grimsby defender.

That’s 32 league goals for Mullin this season, and 34 in all competitions.

On the 42nd minute of the game at Salford, it was Robbie Gotts who put the hosts 1-0 up against Orient. At the same time but on the 80th minute, Aaron Collins made it 3-0 to Forest Green. How did the table look at that stage?

Davide Rodari got one back for Crawley against Bolton with the clock ticking down, but it was all wrapped up for Bolton who have promotion confirmed.

@T0mWhite: Congratulations to everyone connected to the club 👏🏻👏🏻👏🏻 some real heard work and effort put into that season, fully deserved. Enjoy the celebrations 🍾

@B6Nigel: Well done @OfficialBWFC When I walked out the University of Bolton Stadium after Villa last played there, I saw a young Bolton lad and his Dad walking glumly across the car park. I said to them, stick with your club, as the good days will return and today they have

@BromleyCrossBoy: Brilliant effort by everyone at the club. All the players deserve credit but particularly for me Matt Gilks. No coincidence that our promotion run got going when he came into the team.

@proco007: Congratulations (Wigan Fan). We’ve both been through hell. Be great to have that rivalry again. See you next season!

@TovellTweets: Love to see this! Hopefully this is just the start of your route back to the top

@CafcTom18: Well done lads, very much deserved after all the ownership troubles wishing you all the best of luck next season, if we don’t go up bring it on gonna be a banging game with both teams going through hard times the last few years atmosphere gonna be incredible #cafc #BWFC

@Neiljones1010: Truly well worth it, entertained throughout and made us watching at home feel like we’re right with you

@sdstrachan: Sheffield Wednesday away next season anyone?

@scuttyoftheyard: Congratulations guys. King Wes back to torment Ed Sheeran and his band of fools next season. Enjoy the 🍾🍾🍾

@SnowyywonS: Congratulations guys. Many happy memories of going to games at Whaddon Road back in the day!

@paulg0909: Well done you Robins. You fully deserve to be Champions. Enjoy the celebrations. Roll on next season to be back in the ground to watch you boys.

@itssherm: Wish I was up the club celebrating with everyone but at the minute I have other priorities which include buying our first house. Can’t wait to have a drink with everyone next season!

@DannyHa17729500: Well done Duffman & the @CTFCofficial lads what an amazing season ,can’t wait to see the boys in person next season at Whaddon Road in league 1 !!

@tew1984: Amazing. Bravo Duff and the team…I hope we can keep him and consolidate as a League One side. GET IN!!

@george_vmcfc: Very well deserved for Cheltenham Town. Been the best side in League 2 all season, and gave City a great game in the cup. Huge congratulations #CTFC

@FishCM: Massive Congratulations to everyone connected with the club! Brilliant for the town! #CTFC

Now you’ve seen 1 team crowned champion and 2 promoted confirmed on the final day of the League Two season, let us know your full time thoughts via our socials!